Estimation of Soil Loss Tolerance in Olive Groves as an Indicator of Sustainability: The Case of the Estepa Region (Andalusia, Spain)
Previous Article in Special Issue

Spatial and Temporal Distribution of Ecballium elaterium in Almond Orchards

The demand for pesticide-free food has increased the need for sustainable organic farming. Onion (Allium cepa L.) is an important vegetable crop cultivated worldwide. The available weed control tools for intra-row weeds following onion emergence are limited. This study aimed to evaluate the potential use of liquefied petroleum gas (LPG) flaming as a pre- and post-emergence weed control method for both direct-seeded onion seedlings and transplanted onion bulbs. The safety of cross-row, where the flames are targeted to the intra-row area from both sides of the row, and broadcast flaming for bulb onion was compared. Cross-row flaming at twelve days after planting had no effect on onion dry weight, while broadcast flaming-treated plants’ dry weight was reduced by 36% as compared to controls. For the cross-row technique, the tested burners’ angle (45° and 30°) and inter-burner distances (30 and 40 cm) had no impact on weed control efficacy, and similar control levels, between 55% (15 cm) and 45% (10 cm), were observed 15 cm from both sides of the row-center. Direct-seeded onion cultivars were treated at various growth stages. The pre-crop-emergence stage was completely safe for the crop, and the second leaf stage exhibited a wide range of tolerance levels to flaming treatment across the different onion cultivars, with dry weights ranging between 39 and 117% compared to non-treated control in the flaming sensitive and tolerant cultivars, respectively. These results were validated under field conditions using the two most tolerant cultivars (Orlando and Browny); no yield reductions were observed for either cultivar when treated from the third leaf stage. In bulb onion, flaming had no impact on dry weight of shoots or roots when applied from four weeks after planting. This study demonstrates, for the first time, the potential of using flaming as a post-emergence weed control tool for direct-seeded and bulb onion, and at earlier time points than previously shown. Cross-row flaming proved effective for controlling intra-row weeds and can lower weeding costs. Future research should evaluate the safety of sequential applications and test complementary control methods for the initial growth stages. View Full-Text
Keywords: broadcast flaming; cross-row flaming; integrated weed management; intra-row weeds; non-chemical weed control; selectivity; thermal weed control broadcast flaming; cross-row flaming; integrated weed management; intra-row weeds; non-chemical weed control; selectivity; thermal weed control
►▼ Show Figures 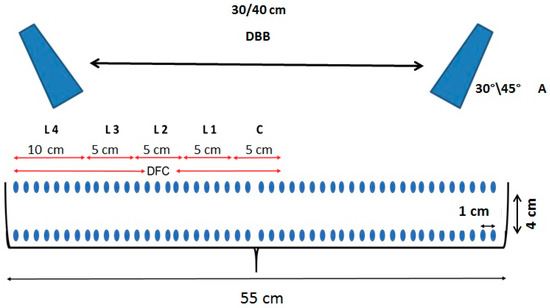