Mean vigor, i.e., daily clipping yield averaged over three events in both 2011 and 2012, was neither influenced by treatment nor the interaction of treatment and time (Table 3). Ranging from 6 to 13 g Si kg−1 across sample dates, mean leaf silicon content of plots receiving either Ca/Mg-silicate treatment significantly exceeded levels measured in plots not treated by Si-rich soil conditioners (Table 3). Similarly, mean silicon uptake from plots treated by Ca/Mg-silicates was statistically-higher than that from the limed plots (Table 3).
Conditioner treatment and time significantly interacted to influence leaf Si content (Table 3). In plots treated by 1220 kg Ca/Mg-silicates (ha year)−1, leaf Si levels mirrored those observed in plots receiving the higher Ca/Mg-silicate rate, except for 22 MAIT (Figure 4A). Plots treated by 2440 kg Ca/Mg-silicates (ha year)−1 received fractional applications in May, June, and July of 2011 and 2012, and showed elevated silicon content in clippings collected from those recently-treated plots in June and July 2011 (11 and 12 MAIT) and May and July 2012 (22 and 24 MAIT).
Conditioner treatment and time also interacted to significantly affect Si uptake (Table 3), as plots treated by silica-rich conditioners showed significantly greater silicon uptake than limestone-treated plots in the first year of treatments (Figure 4B). The general reduction in Si uptake observed over the experimental period was at least a partial result of the significant time effect on clipping yield (Table 3). On average, mean clipping yield in 2012 was 62% of mean yield in 2011 (data not shown). Applications supporting the 1220 kg Ca/Mg-SiO3 (ha year)−1 rate were complete by 21 MAIT, whereas plots treated by 2440 kg Ca/Mg-silicates (ha year)−1 continued to receive split applications through 23 MAIT (Figure 4B). Twenty-two and 24 MAIT, plots treated by 1220 kg Ca/Mg-silicates (ha year)−1 showed statistically equivalent uptake to lime-treated plots. Likewise, plots treated by 2440 kg Ca/Mg-silicates (ha year)−1 showed statistically equivalent Si uptake to lime-treated plots on the 24 MAIT sample collection date. By 25 MAIT, either Ca/Mg-SiO3 treatment resulted in significantly greater Si uptake than lime-treated plots (Figure 4B).
No signs and/or symptomology of turfgrass disease on the perennial ryegrass athletic field system were observed. However, the monthly visual assessment made in late July 2011 revealed necrosis on tips and margins of old leaves in all plots. Indicative of a potassium (K) deficiency [29,36], granular KCl (0-0-60) was broadcast across the field at a 150 kg ha−1 rate and irrigated (1.5 cm) on 1 Aug. Sub-optimal availability of K was confirmed by deficient tissue K levels in clippings collected 28 July 2011 (data not shown). No signs and/or symptomology of turfgrass disease or nutrient deficiencies were observed on the perennial ryegrass athletic field system in 2012.

The Ca/Mg-silicates amendment contained 1.8% Fe and 0.5% Mn (Table 1), and no maintenance applications of micronutrient fertilizer were made in support of this perennial ryegrass system established to an organic matter-rich rootzone. While all treatment means concentrations of leaf Fe (478 to 578 mg kg−1) and leaf Mn (68 to 86 mg kg−1) reside within their respective sufficiency ranges, cool-season turfgrass canopy dark green color has shown direct relation to leaf Fe and Mn concentration across either data range [37]. Specifically, in this study, perennial ryegrass treated by the high Ca/Mg-SiO3 rate resulted in leaf Fe and Mn levels significantly greater than levels treated by 1220 kg (ha year)−1 limestone (data not shown). Accordingly, future investigations of turfgrass response to Ca/Mg-silicates should standardize deliveries of these influential micronutrients.
Given the ubiquity of Si in soil and the disparity between the density of dry leaf tissue and dry soil, the justification for measuring clipping yield and silicon concentration of only non-trafficked plots was to prevent tissue contamination by soil. A seemingly worthwhile measure; presuming Si uptake by the turfgrass plant and Si distribution throughout the plant is independent of imposed wear stress. At the time the described experiment was conducted, we were unaware of any evidence to the contrary.
Subsequent findings indicate Si uptake and accumulation in tall fescue is induced by damage imposed using a metal file [38]. In a greenhouse study conducted using three tall fescue cultivars, mechanical injury induced an increase in leaf Si content of ≅5.2 to 6.6 g kg−1 (significant at a 0.05 alpha level). While such leaf concentrations hardly impart a hyper-Si-accumulator categorization to tall fescue, they do exceed leaf Si concentrations observed in the perennial ryegrass field plots.
Under non-trafficked conditions, the annual Ca/Mg-silicate applications of 1220 or 2440 kg ha−1 increased mean leaf Si 1.7 to 2.5 g kg−1 relative to plots receiving equal doses of plant-essential macronutrients. These significant increases in leaf Si content concur with recent turfgrass literature describing gains of 0.3 to 4.5 g leaf Si kg−1 by applications of 1 to 5 Mg pelletized Mg/CaSiO3 ha−1 [12,13,14,15]. However, experimental and temporal variability preclude the authors from reporting a critical threshold concentration of leaf Si for improved perennial ryegrass wear tolerance. Future efforts towards this end should sample tissue of plots receiving wear treatment, rather than adjacent, non-worn proxies.

Significant reduction in turfgrass canopy quality, ranging from 0.04 to 0.1 NDVI units, resulted from imposed wear treatments. This is a lesser degree than described in other reports of field research that employed a unique wear simulation device and protocol. Trenholm et al. [14] showed simulated wear treatment to reduce the NDVI of seashore paspalum field plots by 0.08 to 0.12 units. In similar field studies evaluating traffic injury to established cultivars of seashore paspalum or bermudagrass, wear treatment reduced NDVI by 0.09 to 0.23 units [39].
In conclusion, direct field measures of perennial ryegrass canopy density showed significant reduction resulted from systematic wear treatment. Yet in combination with the described wear treatment, split applications of granular Ca/Mg-silicates at 1220 or 2440 kg (ha year)–1 significantly improved canopy density relative to blended-limestone treatment. While this significant difference was constrained to <0.01 NDVI units, these field results identify a beneficial response of perennial ryegrass to applications of silicate-rich soil conditioners. When taken into consideration with results of similar studies [10,26], these findings indicate potential benefit(s) of ensuring soil Si availability to maintained perennial ryegrass and warrant further field investigation under intensified wear regimes.

This research was funded by Harsco Minerals Intl. (Sarver, PA), the USDA National Institute of Food and Agriculture and Hatch Appropriations under Project #PEN04592 and Accession #1006804, and The Pennsylvania Turfgrass Council.

The authors are also indebted to Kyle Hivner and associated personnel in the Center for Turfgrass Science at the Pennsylvania State University for their technical support of the described research. 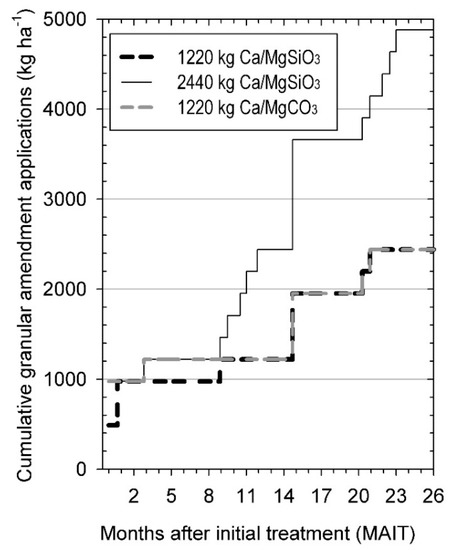 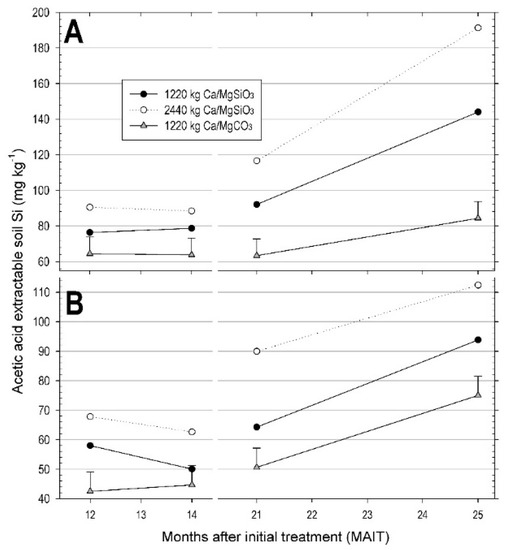 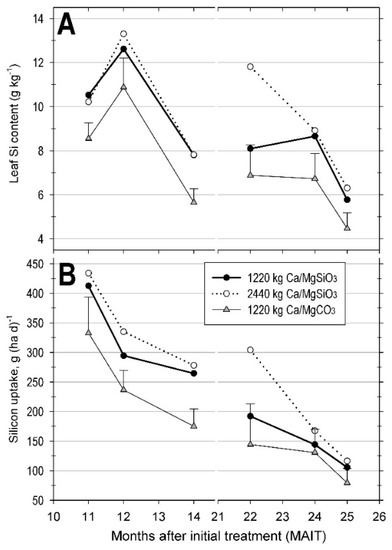 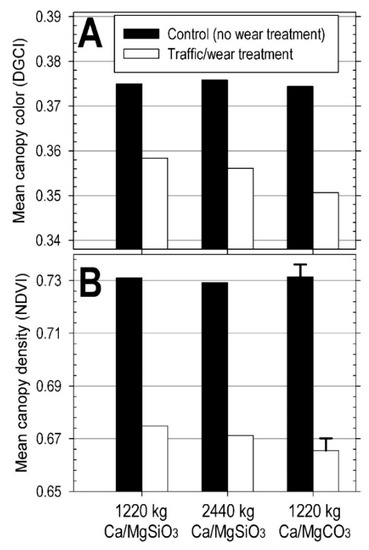 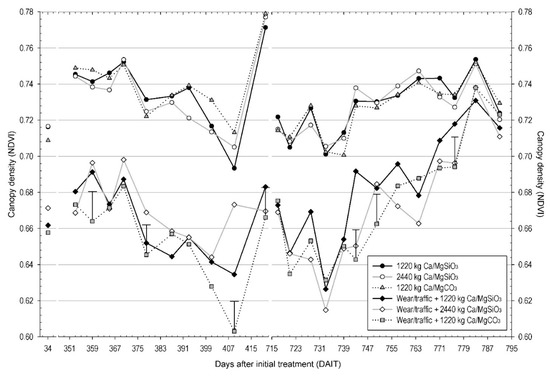