When applying an aided phytostabilization in trace-element-contaminated agricultural soil, the cultivation of forage crops instead of edible crops can reduce the trace elements transfer to humans while minimizing the income loss of farmers. The objectives of this study were to compare the effect of the type of forage crops at the “family” level (Poaceae and Leguminosae) on aided phytostabilization using physical (water stable aggregation), chemical (Mehlich-3 extraction), and biological assessments (dehydrogenase activity). Pig manure and acid mine drainage sludge were used as soil amendments, and four plant species (Loliummultiflorum Lam. var. italicum and Secalecereale L. [Poaceae representatives], Viciavillosa Roth, and Trifoliumpratense L. [Leguminosae representatives]) were cultivated after amendment treatments. Chemical assessment showed that the reduction in bioavailability of trace elements was partly observed in legume crops. The positive effects of plant cultivation were determined through physical assessment. The effectiveness of pig manure as an organic amendment was determined by biological assessment. In some treatments, the synergistic effect of the incorporation of chemical stabilization with both plant families was observed but it was difficult to identify a clear distinction between the two families. The translocation of trace elements from root to shoot was low in all plants, indicating that the cultivation of the plants used in this study is safe with regards to the spread of trace elements into the environment. The results suggest that forage crop cultivation in contaminated agricultural soil could ameliorate soil quality after chemical stabilization. View Full-Text
Keywords: amendment treatment; dehydrogenase activity; environmental restoration; gentle remediation option; phytoremediation; water stable aggregates amendment treatment; dehydrogenase activity; environmental restoration; gentle remediation option; phytoremediation; water stable aggregates
►▼ Show Figures 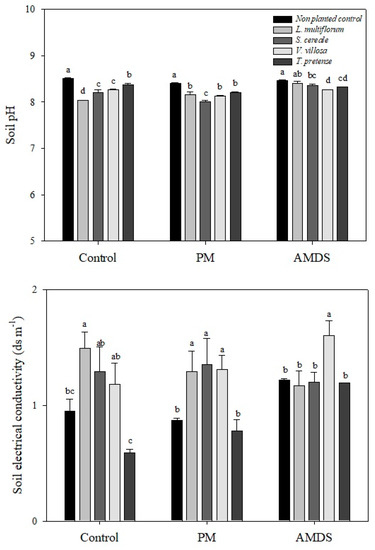