Sugarcane mosaic virus (SCMV) is a mosaic disease that has spread over sugarcane plantations in Indonesia. The important step to overcome the disease is to detect the pathogen as early as possible. Detection of the pathogen can be achieved using the immunodiagnostic method by employing a specific antibody against the viral coat protein. The objective of this research was to produce a polyclonal antibody using the recombinant coat protein of SCMV, and to test its sensitivity for detection of SCMV in the symptomatic plant. The gene encoding of the coat protein was cloned using the RT-PCR Kit and total RNA isolated from symptomatic sugarcane leaves cultivar PS-881. Nucleotide sequences analysis of the cloned cDNA indicated that the cDNA contained 998 nucleotides and named SCMVCp-cDNA. The cDNA was then inserted into a His-tag expression plasmid of pET28a and overexpressed in Escherichia coli BL21 (DE3) to produce a recombinant protein. The recombinant fused protein SCMVCp was strongly expressed in an insoluble fraction, with a molecular size of around 44 kDa, without the addition of an IPTG inducer. Purification of the recombinant protein using an affinity Ni-NTA resin, followed by SDS-PAGE separation, resulted in a high purity of the protein and used as an antigen to raise the polyclonal antibody in a rabbit. The sensitivity of the antiserum determined by western blot analysis showed that the antiserum was able to detect the recombinant protein at a concentration of 10 ng. The western blot analysis also detected a clear single band of 36.7 kDa of the SCMV coat protein in symptomatic sugarcane leaves and not in healthy leaves. Interestingly, when the sample proteins were prepared using low-speed centrifugation, the corresponding coat protein was detected in a soluble fraction by western blot analysis. Thus, the antiserum was successfully used for indirect-ELISA analysis using the soluble protein fraction. The results provide an easy method to detect and diagnose SCMV infection using the immunodiagnostic. View Full-Text
Keywords: sugarcane mosaic virus; polyclonal antibody; coat protein; immunodiagnostic; sugarcane sugarcane mosaic virus; polyclonal antibody; coat protein; immunodiagnostic; sugarcane
►▼ Show Figures 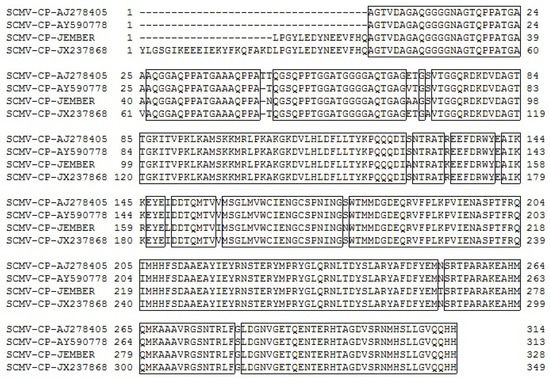 
Darsono N, Azizah NN, Putranty KM, Astuti NT, Addy HS, Darmanto W, Sugiharto B. Production of a Polyclonal Antibody against the Recombinant Coat Protein of the Sugarcane Mosaic Virus and Its Application in the Immunodiagnostic of Sugarcane. Agronomy. 2018; 8(6):93. https://doi.org/10.3390/agronomy8060093