Irrigation Water Quality and Soil Structural Stability: A Perspective with Some New Insights

The sustainability of irrigated agriculture depends on the quality of irrigation water used. The electrolyte concentration (EC) of irrigation water may lead to the accumulation of salts in the root zone layers and affect the physiological functions of the crop by osmotic and ion toxicity effects. Further, the cationic and anionic composition of the water may alter the exchangeable cation composition of the soil as well as its pH. Because of the dominance of sodium salts in many sources of irrigation water, parameters related to sodium such as exchangeable sodium percentage (ESP) of soils and sodium adsorption ratio (SAR) of soil solutions have been commonly used to study the effects of sodium in irrigation water on soil structural stability. Quirk and Schofield’s concept of ‘threshold electrolyte concentration’ (TEC) has shown the importance of electrolytes in preventing the effects of sodium on soil structure. Based on this concept, several models have been proposed to relate ESP or SAR with EC to predict the possible impacts of irrigation water on soil structural stability. However, many research reports indicate that this relationship varies with soils, and a given model is not suitable for all types of soils. Further, the effects of potassium and magnesium in the processes leading to clay dispersion are disregarded in these models. This essay analyses all the factors involved in the structural failure of soils with different cationic composition, identifies the defects in these TEC models, and re-defines TEC on the basis of new insights on dispersive and flocculating charges of soils. This review does not deal with EC effects on crops nor the role of contaminant ions not involved with soil structural stability. View Full-Text
Keywords: water quality; soil structure; threshold electrolyte concentration; zero point of dispersion water quality; soil structure; threshold electrolyte concentration; zero point of dispersion
►▼ Show Figures 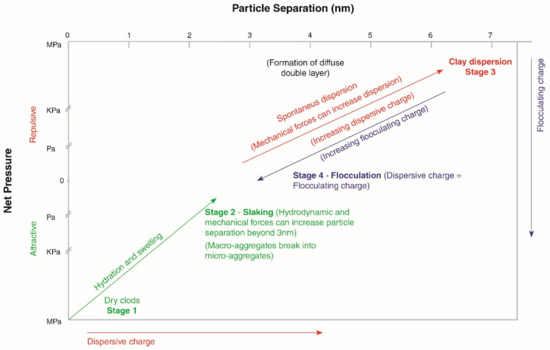