Effects of Climate Change on Grassland Biodiversity and Productivity: The Need for a Diversity of Models
Previous Article in Journal

Utilizing Process-Based Modeling to Assess the Impact of Climate Change on Crop Yields and Adaptation Options in the Niger River Basin, West Africa

Climate change is estimated to substantially reduce crop yields in Sub-Saharan West Africa by 2050. Yet, a limited number of studies also suggest that several adaptation measures may mitigate the effects of climate change induced yield loss. In this paper, we used AquaCrop, a process-based model developed by the FAO (The Food and Agriculture Organization, Rome, Italy), to quantify the risk of climate change on several key cereal crops in the Niger Basin. The crops analyzed include maize, millet, and sorghum under rain fed cultivation systems in various agro-ecological zones within the Niger Basin. We also investigated several adaptation strategies, including changes in the sowing dates, soil nutrient status, and cultivar. Future climate change is estimated using nine ensemble bias-corrected climate model projection results under RCP4.5 and RCP8.5 (RCP—Representative Concentration Pathway) emissions scenario at mid future time period, 2021/25–2050. The results show that on average, temperature had a larger effect on crop yields so that the increase in precipitation could still be a net loss of crop yield. Our simulated results showed that climate change effects on maize and sorghum yield would be mostly positive (2% to 6% increase) in the Southern Guinea savanna zone while at the Northern Guinea savanna zone it is mostly negative (2% to 20% decrease). The results show that at the Sahelian zone the projected changes in temperature and precipitation have little to no impact on millet yield for the future time period, 2021/25–2050. In all agro-ecological zones, increasing soil fertility from poor fertility to moderate, near optimal and optimal level significantly reversed the negative yield change respectively by over 20%, 70% and 180% for moderate fertility, near optimal fertility, and optimal fertility. Thus, management or adaptation factors, such as soil fertility, had a much larger effect on crop yield than the climatic change factors. These results provide actionable guidance on effective climate change adaptation strategies for rain fed agriculture in the region. View Full-Text
Keywords: climate change; agriculture; crop yield; adaptation; Niger Basin; AquaCrop climate change; agriculture; crop yield; adaptation; Niger Basin; AquaCrop
►▼ Show Figures 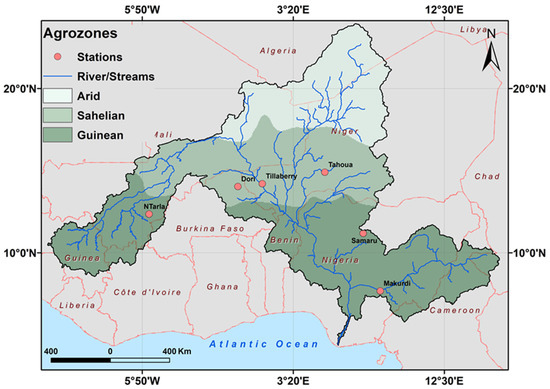