Galactinol synthases (GolSs) are the key enzymes that participate in raffinose family oligosaccharides (RFO) biosynthesis, which perform a big role in modulating plant growth and response to biotic or abiotic stresses. To date, no systematic study of this gene family has been conducted in cassava (Manihot esculenta Crantz). Here, eight MeGolS genes are isolated from the cassava genome. Based on phylogenetic background, the MeGolSs are clustered into four groups. Through predicting the cis-elements in their promoters, it was discovered that all MeGolS members act as hormone-, stress-, and tissue-specific related elements to different degrees. MeGolS genes exhibit incongruous expression patterns in various tissues, indicating that different MeGolS proteins might have diverse functions. MeGolS1 and MeGolS3–6 are highly expressed in leaves and midveins. MeGolS3–6 are highly expressed in fibrous roots. Quantitative real-time Polymerase Chain Reaction (qRT-PCR) analysis indicates that several MeGolSs, including MeGolS1, 2, 5, 6, and 7, are induced by abiotic stresses. microRNA prediction analysis indicates that several abiotic stress-related miRNAs target the MeGolS genes, such as mes-miR156, 159, and 169, which also respond to abiotic stresses. The current study is the first systematic research of GolS genes in cassava, and the results of this study provide a basis for further exploration the functional mechanism of GolS genes in cassava. View Full-Text
Keywords: galactinol synthase; gene expression pattern; abiotic stress; Manihot esculenta; cassava galactinol synthase; gene expression pattern; abiotic stress; Manihot esculenta; cassava
►▼ Show Figures 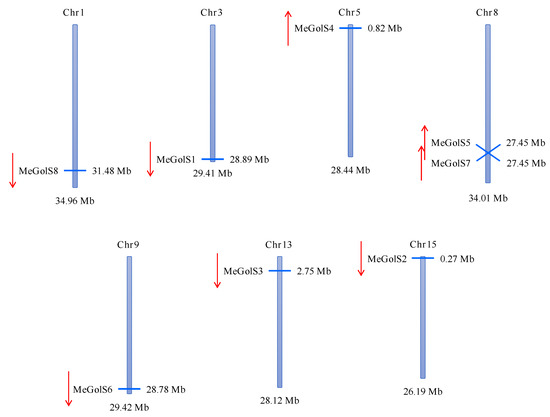