In-Vitro Inhibition of Pythium ultimum, Fusarium graminearum, and Rhizoctonia solani by a Stabilized Lactoperoxidase System alone and in Combination with Synthetic Fungicides

The nutritional evaluation of quality protein maize (QPM) in feeding trials has proved its nutritional superiority over non-QPM varieties for human and livestock consumption. The present paper reviews some of the most recent achievements in development of QPM varieties using both conventional and molecular breeding under stressed and non-stressed environments. It is evident that numerous QPM varieties have been developed and released around the world over the past few decades. While the review points out some gaps in information or research efforts, challenges associated with adoption QPM varieties are highlighted and suggestions to overcome them are presented. The adoption of released varieties and challenges facing QPM production at the farmer level are also mentioned. Several breeding methods have been conventionally used to develop QPM varieties in stressed (drought, low soil nitrogen, resistance to grey leaf spot, Turcicum leaf blight, ear rot, and Striga) and non-stressed environments. At least three genetic loci have been found to be implicated in controlling the levels of a protein synthesis factor correlated with lysine. They have been mapped on chromosomes 2, 4, and 7. While the use of molecular approaches will improve the efficiency and speed of variety development, the cost implications might limit the use of these technologies in the developing world. More emphasis should be given to breeding QPM for tolerance to environmental stresses, such as low soil pH, heat, and combined heat and drought stress. The post-harvest attack of QPM grains should also be considered. The adoption of QPM genotypes by farmers has been found to be limited mainly due to the minimal collaboration between maize breeders, farmers, agricultural extension workers, and other relevant stakeholders, as well as the need for isolating QPM varieties from normal maize. Therefore, there is need to use participatory plant breeding (PPB) and/or participatory variety selection (PVS) to enhance and improve the adoption of QPM varieties. View Full-Text
Keywords: QPM; breeding; adoption; PPB; PVS QPM; breeding; adoption; PPB; PVS
►▼ Show Figures 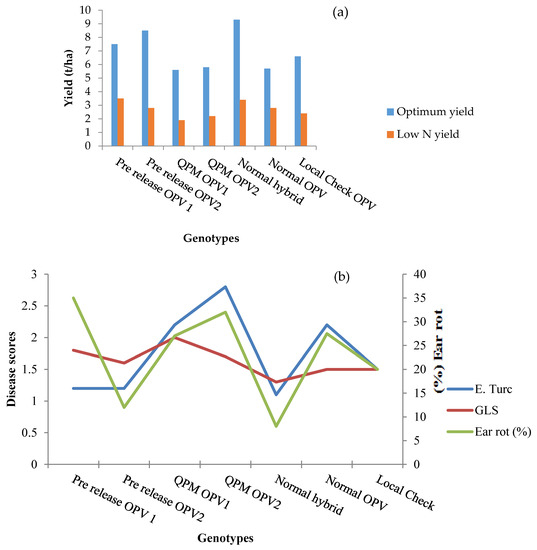