Tolerance to frequent defoliations is critical for native warm-season grasses managed for forage and wildlife habitat. Yield response of big bluestem (Andropogon gerardii), indiangrass (Sorghastrum nutans), and little bluestem (Schizachyrium scoparium) to treatments (30-, 40-, 60-, 90- or 120-d harvest intervals) and durations were assessed on early-succession mixed stands. Over three years, phased harvestings were initiated in May, on sets of randomized plots, in five replications to produce one-, two-, and three-year old stands, by the third year. Each plot had marked indiangrass and big bluestem plants which were hand-clipped on harvest-days before whole-plot harvesting. Species yields were greater in first- than second-year plots but not affected by treatments. June–September yields in 2008 were greatest for the 30-d, and more in the first- (8472 kg ha−1) than second-year (7627 kg ha−1) plots. In 2009, yields were also greater in first- than second-year plots but without treatment effects. Recovery yields showed no treatment effect, but were about 67% less for second- compared to first-year plots and much less than plots never harvested before. Data suggest that harvesting similar mixed native warm-season grass stands at 30- to 40-d intervals may provide good hay yields without compromising post-season stand recovery for multiple uses. View Full-Text
Keywords: Native grass; warm-season; harvest; forage; yield; bluestem; defoliation; recovery Native grass; warm-season; harvest; forage; yield; bluestem; defoliation; recovery
►▼ Show Figures 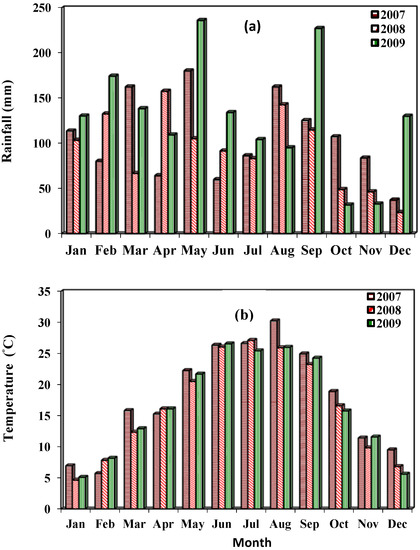