The Green Revolution has enabled Asian countries to boost their crop production enormously. However, Africa has not benefitted from this agricultural revolution since it did not consider local, but important crops grown in the continent. In addition to their versatile adaptation to extreme environmental conditions, African indigenous crops provide income for subsistence farmers and serve as staple food for the vast majority of low-income consumers. These crops, which are composed of cereals, legumes, vegetables and root crops, are commonly known as underutilized or orphan crops. Recently, some of these under-researched crops have received the attention of the national and international research community, and modern improvement techniques including diverse genetic and genomic tools have been applied in order to boost their productivity. The major bottlenecks affecting the productivity of these crops are unimproved genetic traits such as low yield and poor nutritional status and environmental factors such as drought, weeds and pests. Hence, an agricultural revolution is needed to increase food production of these under-researched crops in order to feed the ever-increasing population in Africa. Here, we present both the benefits and drawbacks of major African crops, the efforts being made to improve them, and suggestions for some future directions. View Full-Text
Keywords: African crops; orphan crops; understudied crops; crop improvement; breeding techniques African crops; orphan crops; understudied crops; crop improvement; breeding techniques
►▼ Show Figures 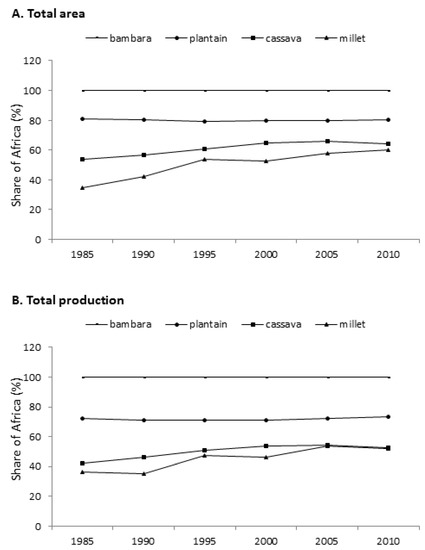