Is the Subsurface Drip the Most Sustainable Irrigation System for Almond Orchards in Water-Scarce Areas?
Previous Article in Journal

Assessing the Response of Vitis vinifera L. cv. Xynisteri to Different Irrigation Regimes and Its Comparison to cvs. Maratheftiko, Shiraz and Sauvignon Blanc

In small-clustered vine cultivars, the conditions of success for a hanging form in order to guarantee a sufficient yield and quality level could go through establishing a permanent vertical cordon to enhance vine capacity and to retain a greater number of buds without making a canopy too compact. In this case, it is also important to quantify the main source–sink relationships within the vine in terms of the vine’s general responses to water shortage. The influence of two types of spur pruned vines (head-trained (HT) vs. vertical cordon trained (VCT)) was examined in field-grown vines in the local cultivar Maturana Blanca in order to achieve an optimal yield under two irrigation regimes (non-irrigated and irrigated at 30% of ET0). For this vegetative development, yield, fruit composition, and wine volatile compounds were measured. The VCT system has demonstrated to increase yield up to 1.8-fold as compared with the HT system independently of the irrigation regime. Although clear differences were observed in the source-sink ratios between the two training systems, these differences did not affect the ripening of the grapes nor their quality. However, a reduction in berry size and the more exposed clusters in VCT vines resulted in a higher concentration of aromatic compounds in the obtained wines as compared with those of HT vines. This study indicates the improvement of the source to sink ratio of the cv. Maturana Blanca through a change in the training system, which helps to increase light interception, leading to a higher yield potential, an optimization of the leaf area to fruit ratio, and an increase in the concentration of aromatic compounds. View Full-Text
Keywords: head-trained; Vitis vinifera; yield components; vertical cordon; volatile compounds; deficit irrigation head-trained; Vitis vinifera; yield components; vertical cordon; volatile compounds; deficit irrigation
►▼ Show Figures 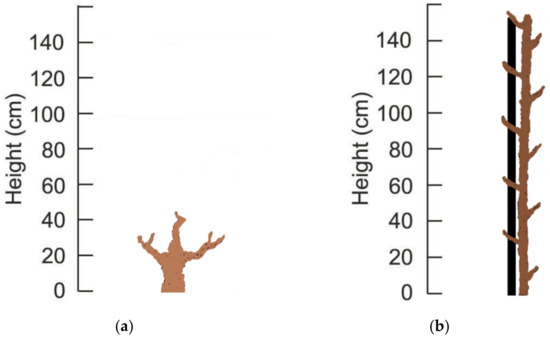