Application of Biocat G, Selenium, and Chitosan to Counteract the Negative Effects of Cd in Broccoli Plants Grown in Soilless Culture
Previous Article in Journal

Intra- and Inter-Population Genetic Diversity of “Russello” and “Timilia” Landraces from Sicily: A Proxy towards the Identification of Favorable Alleles in Durum Wheat

Climate change and global population growth call for urgent recovery of genetic variation from underexploited or unexplored durum wheat (Triticum turgidum ssp. durum) landraces. Indeed, these untapped genetic resources can be a valuable source of favorable alleles for environmental adaptation and tolerance or resistance to (a)biotic stress. In southern Italy, in addition to the widespread modern and highly productive durum wheat cultivars, various landraces have been rediscovered and reused for their adaptation to sustainable and low-input cropping systems and for their peculiar qualitative characteristics. Sicily is a semiarid area rich in landraces, some of which are independently reproduced by many farmers. Among these, “Timilia” and “Russello” have been independently grown in various areas and are now cultivated, mostly under organic systems, for their hypothetical greater benefits and height, which give them a high level of competitiveness against weeds despite their low yield potential. So far, there is little information on the genetic variations of “Timilia” and “Russello” despite their putative origin from a common funder. This work aims to dissect the genetic variation patterns of two large germplasm collections of “Timilia” and “Russello” using SNP genotyping. The analysis of intra- and inter-population genetic variation and the identification of divergent loci between genetic groups showed that (i) there are two “Russello” genetic groups associated with different Sicilian geographical areas, which differ in important traits related to gluten quality and adaptation, and (ii) the individuals of “Timilia”, although presenting wide genetic variation, have undergone a conservative selection, likely associated with their distinctive traits. This work paves the way for a deeper exploration of the wide genetic diversity in Sicilian landraces, which could be conveniently exploited in future breeding programs, and points out that intra-population genetic diversity should be taken into account when ‘conservation varieties’ are to be registered in national registers of crops. View Full-Text
Keywords: Triticum turgidum ssp. durum; landraces; divergent loci; genetic diversity; Fst; favorable alleles; adaptation; climate change Triticum turgidum ssp. durum; landraces; divergent loci; genetic diversity; Fst; favorable alleles; adaptation; climate change
►▼ Show Figures 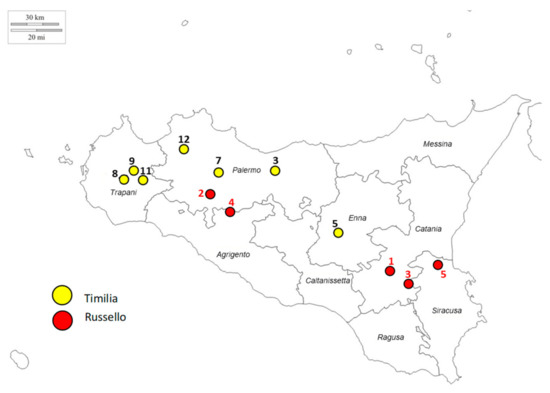