Biocontrol of Stemphylium vesicarium and Pleospora allii on Pear by Bacillus subtilis and Trichoderma spp.: Preventative and Curative Effects on Inoculum Production

Faba bean (Vicia faba L.) Algerian accessions represent an essential source of traits of interest for crop improvement, especially for tackling climate change, because their genetic background and potential have not been well studied. The purpose of this research was to assess the genetic variability of 14 Algerian faba bean accessions by means of 10 agro-morphological traits and 7 simple sequence repeat markers (SSRs). ANOVA analysis showed a large significant phenotypic variation in fruit setting (FS), seed length (SL), seed width (SW), and 100-seeds weight (HSW), which arose as the main discriminant characters as revealed by principal component analysis (PCA). In addition, SSR analysis identified a total of twenty different alleles within our collection with a mean of 2.85 alleles per locus. The polymorphism information content (PIC) ranged from 0.32 to 0.58, with a mean of 0.44. Observed heterozygosity (Ho) ranged from 0.57 to 1.00 with a mean of 0.72, while the expected one (He) varied from 0.42 to 0.67, reaching a mean of 0.57. Based on agro-morphological as well as molecular data, the 14 accessions were not clustered according to the geographical pattern, as also confirmed by principal coordinate analysis (PCoA). Moreover, AMOVA highlighted that most of the overall genetic variation within our collection was the result of strong differentiation among accessions (84%). Finally, the Mantel test revealed that there was no substantial correlation between the molecular and agro-morphological traits (r = −0.025, p > 0.05). These findings represent a first step toward faba been breeding programs establishment in Algeria, indicating that our collection exhibited optimal agro- and molecular diversity to identify specific traits useful in Mediterranean environment. View Full-Text
Keywords: agro-morphological traits; faba bean; genetic diversity; simple sequence repeat (SSR) agro-morphological traits; faba bean; genetic diversity; simple sequence repeat (SSR)
►▼ Show Figures 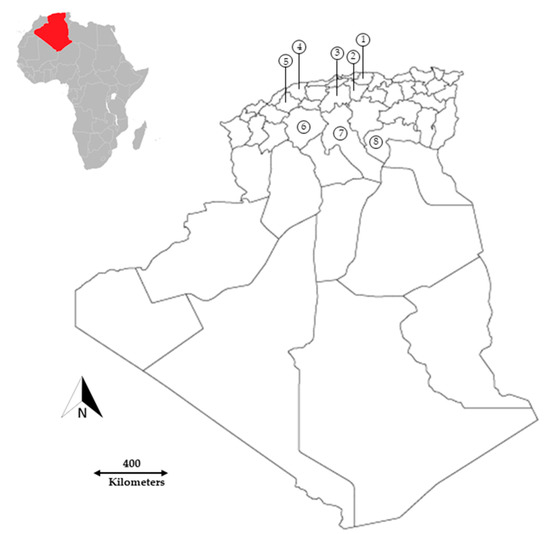