Climate Change Impacts on Cacao: Genotypic Variation in Responses of Mature Cacao to Elevated CO2 and Water Deficit
Next Article in Special Issue

Hairy root disease (HRD) caused by rhizogenic Agrobacterium biovar 1 strains affect tomato, cucumber, eggplant, and bell pepper grown in hydroponic greenhouses and can cause considerable yield losses worldwide. Recently, Paenibacillus xylanexedens strains (ST15.15/027 and AD117) with antagonistic activity against rhizogenic agrobacteria were identified. In this study, we present results of greenhouse trials of two consecutive growing seasons (2019 and 2020) to examine the potential of these two biocontrol organisms (BCOs) under practical conditions. BCO-treatment at a 107 colony forming units (CFU)/mL density resulted in a considerable reduction of the HRD infestation rate, confirming the biocontrol potential of the two P. xylanexedens strains. Results revealed that a single BCO strain (ST15.15/027) performed equally well as the mixed inoculum of both strains. The same level of biocontrol activity was even achieved when the BCO inoculum density was reduced to 105 CFU/mL. qPCR analysis further showed that Paenibacillus was still present in rockwool substrate near the end of both trials, indicating that they persist well in a rockwool environment and that application at the start of the trial is sufficient to protect tomato plants until the end of the trial. Altogether, these results are highly valuable for further optimization and exploitation of P. xylanexedens as a biocontrol product for the control of HRD in hydroponic greenhouses. View Full-Text
Keywords: biological control organism (BCO); greenhouse hydroponics; hairy root disease (HRD); Paenibacillus; rhizogenic Agrobacterium; rockwool biological control organism (BCO); greenhouse hydroponics; hairy root disease (HRD); Paenibacillus; rhizogenic Agrobacterium; rockwool
►▼ Show Figures 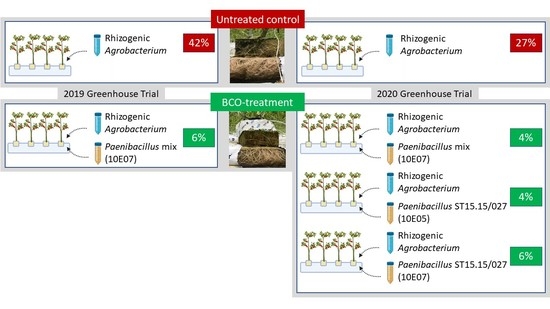