Alternaria alternata is a fungus that causes a serious disease in susceptible genotypes of citrus, particularly in mandarins. The Alternaria citri toxin (ACT) produced by the pathogen induces necrotic lesions on young leaves and fruits, defoliation and fruit drop. Here, we describe two methods of marker-assisted selection (MAS) that could be used for the early identification of Alternaria brown spot (ABS)-resistant mandarin hybrids. The first method is based on a nested PCR coupled to high resolution melting (HRM) analysis at the SNP08 locus, which is located at 0.4 cM from the ABS resistance locus, and was previously indicated as the most suitable for the selection of ABS-resistant hybrids. The method was validated on 41 mandarin hybrids of the CREA germplasm collection, and on 862 progenies generated from five crosses involving different susceptible parents. Four out of five populations showed Mendelian segregation at the analyzed locus, while a population involving Murcott tangor as male parent showed distorted segregation toward the susceptible hybrids. The second method is based on a cleaved amplified polymorphic sequences (CAPS) marker that was developed using the same primers as the nested PCR at the SNP08 locus, coupled with BccI restriction enzyme digestion. To verify the reliability of the two genotyping methods, in vitro leaf phenotyping was carried out by inoculating A. alternata spores onto young leaves of 101 hybrids, randomly chosen among the susceptible and resistant progenies. The phenotyping confirmed the SNP08 genotyping results, so the proposed method of selection based on HRM or CAPS genotyping could be routinely used as an alternative to KBioscience competitive allele specific polymerase chain reaction (KASPar) single nucleotide polymorphism (SNP) genotyping system to improve citrus breeding programs. While the study confirmed that the SNP08 marker is a reliable tool for MAS of new citrus hybrids with different genetic backgrounds, it also identified a small group of genotypes where the resistance mechanism requires further investigation. View Full-Text
Keywords: Alternaria alternata; genotyping; mandarins; single nucleotide polymorphisms Alternaria alternata; genotyping; mandarins; single nucleotide polymorphisms
►▼ Show Figures 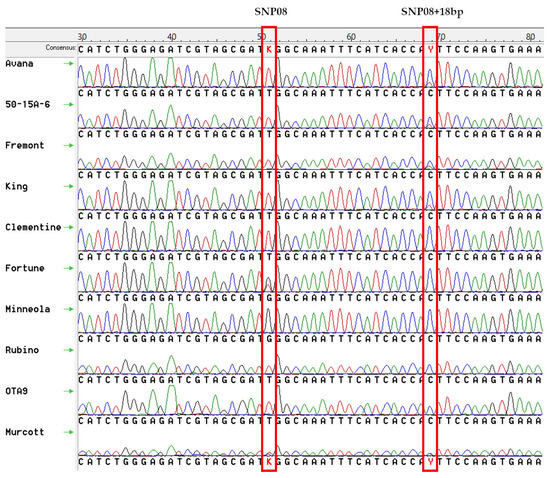