Translation of Irrigation, Drainage, and Electrical Conductivity Data in a Soilless Culture System into Plant Growth Information for the Development of an Online Indicator Related to Plant Nutritional Aspects

The development of large-scale farming has encouraged the adoption of mechanical transplanting techniques for rice production. However, the increased farming operation times that often occur under large-scale farming conditions necessitate shortening the duration of rice growth, especially that of late-season rice; therefore, rice cultivars with short growth durations are popular under such conditions. A field experiment using two short-duration rice cultivars (SRCs), i.e., Jiuliangyou 3 and Shengyou 9520, and two long-duration rice cultivars (LRCs), i.e., Shengyou 957 and Tianyouhuazhan, was conducted in the late season in Yongan and Santang, Hunan Province, China in 2017 and 2018. The grain yield and yield attributes were compared between the SRCs and LRCs, showing that the SRCs, which exhibited an 11–12-day shorter growth period, revealed similar grain yield to the LRCs. The SRCs also exhibited a 10–31% higher spikelet filling rate and a 13% higher harvest index than the LRCs. Moreover, the biomass accumulation, crop growth rate, and apparent radiation use efficiency of the SRCs were significantly higher than those of the LRCs during the postheading phase. Our results indicate that the higher spikelet filling rate, the harvest index, and the apparent radiation use efficiency of the postheading period were the underlying factors for the SRCs’ grain yield. View Full-Text
Keywords: rice; yield; harvest index; short-duration rice; double-cropping rice rice; yield; harvest index; short-duration rice; double-cropping rice
►▼ Show Figures 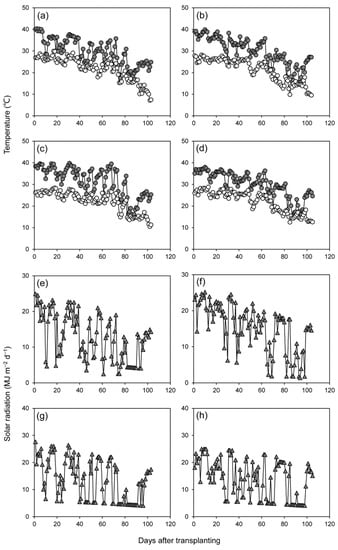