Response of Rice to Tillage, Wheat Residue and Weed Management in a Rice-Wheat Cropping System
Previous Article in Journal

Modeling Planting-Date Effects on Intermediate-Maturing Maize in Contrasting Environments in the Nigerian Savanna: An Application of DSSAT Model

The Crop Environment Resource Synthesis (CERES)-Maize model in Decision Support System for Agricultural Technology Transfer (DSSAT) was calibrated and evaluated with experimental data for simulation of response of two intermediate-maturing maize varieties to different sowing dates in the Nigerian savannas. The calibration experiments involved 14 consecutive field trials conducted in the rainy and dry seasons in Bayero University Kano (BUK), Dambatta, and Zaria between 2014–2019. Two sets of field experiments were conducted simultaneously for model evaluation in Iburu in the southern Guinea savanna zone and Zaria in the northern Guinea savanna zone during 2015 and 2016 cropping seasons. The experiments for calibration had two maize (SAMMAZ-15 and SAMMAZ-16) varieties planted under optimum conditions with no water and nutrients stresses. The trials for model evaluation were conducted using the same varieties under four different nitrogen (N) rates (0, 60, 120 and 180 kg N ha−1). A 30-year (1985–2014) term simulation was performed to determine effect of varying sowing dates on yields of two maize varieties (SAMMAZ-15 and SAMMAZ-16) in the Sudan savanna (SS), northern Guinea savanna (NGS), and southern Guinea savanna (SGS) zones. The calibration results showed that the cultivar coefficients of the two maize varieties resulted in simulated growth and development parameters that were in good agreement with observed parameters. Model evaluation showed a good agreement between simulated and observed data for phenology and growth of maize. This demonstrated the potential of the CERES-Maize model to simulate growth and yield of maize in the Nigeria savannas. Results of 30-year sensitivity analysis with 9 different sowing windows showed that in SS, sowing the intermediate maize varieties from early to mid-June produced the highest grain yields. In NGS, the optimum sowing windows were found between late June and late July for the both varieties. In SGS, the optimum sowing window is from early June to late July for SAMMAZ-15 and mid-June to late July for SAMMAZ-16. These planting windows gave the highest long-term average yields for each variety. The variety SAMMAZ-15 was found to be best performing across the three agro-ecologies. Maize performance was generally higher in NGS than in SGS. SS in the Sudan savanna recorded the lowest yield compared with other locations. View Full-Text
Keywords: CERES-Maize model; planting window; intermediate maize varieties; agro-ecologies CERES-Maize model; planting window; intermediate maize varieties; agro-ecologies
►▼ Show Figures 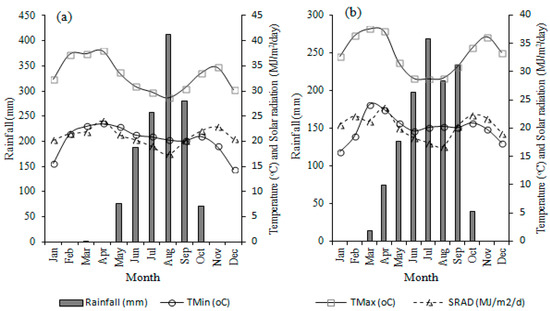