The Effects of Hydrogen Peroxide on Plant Growth, Mineral Accumulation, as Well as Biological and Chemical Properties of Ficus deltoidea
Previous Article in Journal

Paecilomyces variotii as A Plant-Growth Promoter in Horticulture

The selection of superior strawberry genotypes is a complex process due to the high variability after hybridization that is caused by the octoploid nature and the heterozygosis, making the selection of multiple traits difficult. This study aimed to select strawberry hybrids with the potential for fresh consumption and/or processing by applying multivariate analysis to obtain traits of interest simultaneously. Hybrids were obtained from the crossing among seven commercial cultivars, defining a selection of 10% of them. The experimental design consisted of an augmented block design, with two commercial cultivars, Camarosa and Camino Real, as the controls. Different variables, including the number and average mass of commercial fruits, total fruit mass, pH, soluble solids (SS), titratable acidity (TA), SS/TA ratio, reducing sugars, pectin, ascorbic acid, phenolic compounds, and anthocyanin’s, were assessed. The selection of hybrids was based on the Mulamba and Mock rank-summation index, principal component analysis, and Ward’s hierarchical cluster analysis. The selection index was based on different weights being adopted for fresh market and processing. The assessed traits had high variability between hybrids. The highest selection gains were obtained for production traits, but the different weight assignment resulted in different classifications of hybrids for both fresh consumption and processing. Most of the hybrids selected by the index remained in the same group in the principal component and hierarchical cluster analyses, which indicates that multivariate analysis is a valuable tool for assisting in the selection of superior hybrids in the strawberry crop. View Full-Text
Keywords: plant breeding; hybrids; strawberry; Mulamba and Mock plant breeding; hybrids; strawberry; Mulamba and Mock
►▼ Show Figures 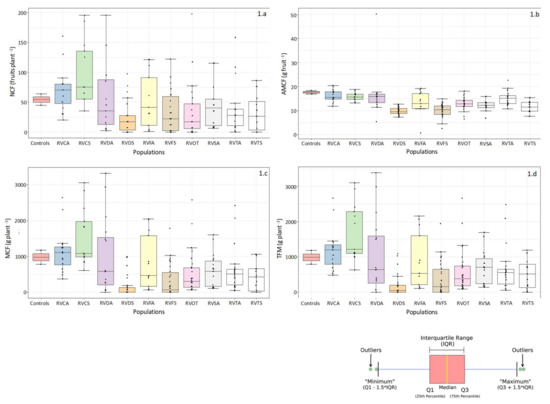