Potassium (K) is an essential macronutrient for plant growth and development. K deficiency seriously affects protein and carbohydrate synthesis in the leaves of plants. The present study was carried out with two cotton genotypes with low K tolerance to investigate the different changes on chemical composition and structure in leaves of K-efficient cotton genotypes under low K stress by using Fourier transform infrared spectroscopy (FTIR) technology. The results showed that K deficiency decreased the leaf photosynthetic pigments in both genotypes, but significant observations were noted in K-efficient genotype 103. FTIR spectra and semiquantitative analysis revealed that the cell membrane permeability, cell wall pectin, protein, and polysaccharides of leaves were greatly influenced by K deficiency, and the changes were more significant in the leaf of genotype 122, indicating a better adaptation to low K in genotype 103. The results of this study revealed that the difference of low K adaptation of these two cotton genotypes might be related to maintaining cell wall integrity and carbohydrate transport in cells. These different compositional and structural changes in the leaves of the two cotton genotypes under K-deficient level gain a new physiological mechanism of K efficiency in cotton. View Full-Text
Keywords: potassium; cotton genotypes; FTIR; composition; structure potassium; cotton genotypes; FTIR; composition; structure
►▼ Show Figures 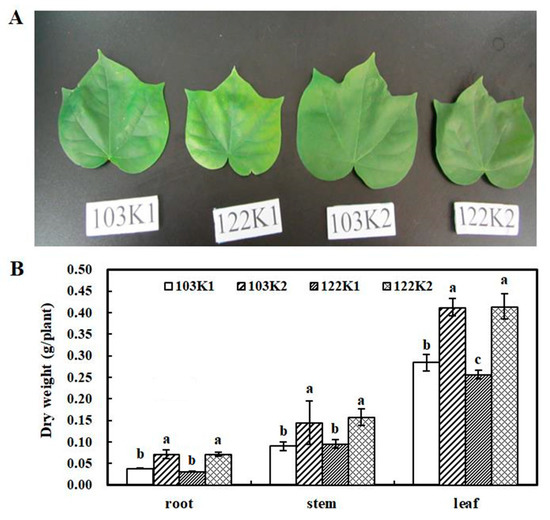