To realize quick localization of plant maize, a new real-time localization approach is proposed for maize cores at the seedling stage, which can meet the basic demands for localization and quantitative fertilization in precision agriculture and reduce environmental pollution and the use of chemical fertilizers. In the first stage, by taking pictures of maize at the seedling stage in a field with a monocular camera, the maize is segmented from the weed background of the picture. And then the three most-effective methods (i.e., minimum cross entropy, ISODATA, and the Otsu algorithm) are found from six common segmentation algorithms after comparing the accuracy rate of extracting maize and the time efficiency of segmentation. In the second stage, plant core from segmented maize image is recognized, and localized, based on different brightness of the rest part of maize core and plant. Then the geometric center of maize core is considered as localization point. the best effect of extracting maize core was found from the minimum cross entropy method based on gray level. According to experimental validation using many field pictures, under weedy conditions on sunny days, the proposed method has a minimum recognition rate of 88.37% for maize cores and is more robust at excluding weeds. View Full-Text
Keywords: minimum cross entropy; maize core; real-time localization minimum cross entropy; maize core; real-time localization
►▼ Show Figures 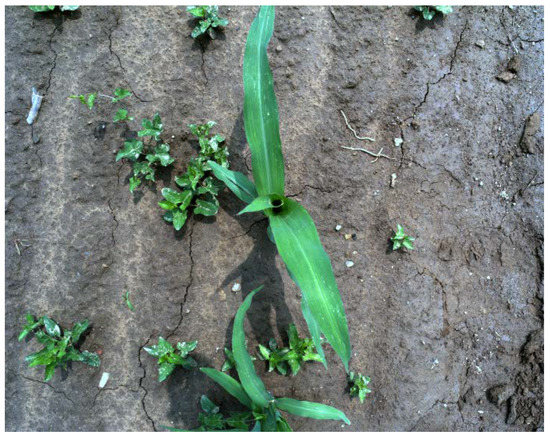