Cover crops can protect soil health and increase climate resilience of crop production systems. Agronomic crop producers in the southern USA often demand information on the best cover crops for their locality and cropping system and on the potential impacts of cover crops on stored soil water. The present research evaluated biomass production and water use efficiency (WUE) of single species and multispecies winter cover crops in South Carolina. Overall, a five-species mixture of Austrian winter pea, rye, crimson clover, hairy vetch, and oats and a single species of rye had the greatest biomass production (4600–6480 kg ha−1) at the end of the season (19 April 2017 in season-1 and 10 May 2018 in season-2). The five-species mixture also had the greatest WUE (2184–2232 g m−3). None of the cover crops depleted soil water (in 60 cm depth) greater than a weed-free fallow maintained through herbicide application and a weedy fallow (no herbicide application). Since both the seasons, in which the present study was conducted, received greater than normal rainfall, further studies should verify the applicability of the results in dry years.
Keywords: cover crop; biomass; stored soil water; water use efficiency cover crop; biomass; stored soil water; water use efficiency

Most agricultural soils in the southern USA have low soil organic matter and limited water and nutrient holding capacity [1,2]. Excessive tillage, inadequate crop rotations, crop residue removal, overgrazing, and increasingly extreme weather events have further degraded soil health in this region [3,4]. Cover crops, if chosen properly, can enhance soil health, improve soil water holding capacity [5,6,7,8], reduce the need for herbicides or cultivation for weed control [4,9,10,11], and increase the resilience of production systems to extreme weather [12,13]. Annual nationwide surveys conducted by the Sustainable Agriculture Research and Education (SARE) report increasing farmer interest in cover cropping [14]. Cover crop adoption percentage is higher in the southern USA than in other parts of the country primarily due to favorable environmental conditions [15]. The long cropping season in the southern USA is particularly conducive for winter cover crops to be rotated with warm season cash crops. Agronomic crop producers in this region often demand information regarding (a) the most suitable cover crops for their locality and cropping system, (b) labor and cost associated with planting and managing cover crops, and (c) potential impacts of cover crops on soil water, soil nutrients, and cash crop productivity [16].
Even though the specific reasons for growing cover crops vary among locations, cover crops will be beneficial to the agroecosystems mostly if they produce sufficient biomass. Reberg-Horton et al. [4] evaluated the productivity of cereal and legume cover crops in the Southeast from 2008 to 2010 and found that this region is capable of producing >9000 kg ha−1 of cover crop biomass. Several studies in the country have evaluated cover crops as a single species or mixtures for biomass production [4,10,17,18,19,20,21,22,23,24,25,26,27,28,29,30]. For example, Dunavin [19] reported that a mixture of turnip–Chinese cabbage hybrid (Brassica campestris var. rapa L. × Brassica pekinensis (Lour.) Rupr.), ryegrass (Lolium multiflorum Lam.) and crimson clover (Trifolium incarnatum L.); a mixture of rape (Brassica napus L.), ryegrass, and crimson clover; a mixture of rye, ryegrass, and crimson clover; and a mixture of ryegrass and crimson clover produced more dry matter than any of the species grown as monocultures, except ryegrass in Florida. Contrasting findings have also been reported. For example, Nielsen et al. [28] found that a single species of flax (Linum usitatissimum L.), oat (Avena sativa L.), pea (Pisum sativum subsp. arvense L. Poir.), and rapeseed (Brassica napus L.) produced more biomass than a ten-species mixture containing all those four species in Colorado and Nebraska. Available literature indicates that any advantage of increased biomass production by cover crop mixtures compared to monocultures depends upon many factors such as location, species, soil type, and soil nutrient and water conditions.
Most agronomic crop producers in the southern USA (those who do not practice double cropping) use a fallow period in fall-spring. Keeping land in fallow may increase runoff and soil erosion and deteriorate soil health by adversely affecting soil organic matter content and microbial activity [31,32,33,34]. However, this practice is often perceived as a water storage strategy for the subsequent crop simply because there are no plants to take up water. The amount of soil water stored during fallow depends on many factors, including the amount of residue on the soil surface, soil type, precipitation patterns, and weed growth [35]. A recent study conducted on summer cover crops in the Great Plains region of the USA found that soil under fallow lost up to 7.9 cm less water than under cover crops during the cover crop growth period, but captured up to 3.4 cm less water in the following spring due to lack of residues on the soil surface [36]. Cover crop studies in Tennessee [7] and Nebraska [37] found that cover crop mixtures increased plant-available water for subsequent crops compared to fallow. Earlier studies in coastal South Carolina found that available soil water at 0–60 cm and 0–37 cm was lower for corn (Zea mays L.) and soybean (Glycine max (L.) Merr.), respectively, when the crop was planted after a rye cover crop rather than after fallow [38,39]. Similarly, Ewing et al. [40] found that crimson clover depleted soil water at 0–60 cm up to 55% compared to fallow treatments, before corn planting in coastal North Carolina. In contrast, a recent study in coastal South Carolina found that a rye (Secale cereale L.) cover crop enhanced plant-available water, rooting depth, and yield in cotton (Gossypium hirsutum L.) [41]. No studies have tested the effect of cover crops on stored soil water in the upstate of South Carolina, which has a very different soil type (significantly higher clay content) compared to the southern coastal plain (primarily sandy soils).
The objective of this study was to evaluate seven cover crops (single species or mixtures) for biomass production, stored soil water, and water use efficiency (WUE). The cover crops evaluated in this study were winter cover crops that are commonly available in the southern USA.

The results from this study suggest that a five-species mixture of Austrian winter pea, rye, crimson clover, hairy vetch, and oats and a single species of rye would be good winter cover crops for the upstate of South Carolina in terms of biomass production, if planting occurs in fall. The five-species mixture would be a better choice over rye, if planting occurs in mid-late winter. Since the five-species mixture is a combination of grass and legume functional groups, it could be superior when soil health benefits are also considered. The additional planning, labor, and cost that may be associated with dealing with a mixture should also be considered before choosing it for any cropping systems.

This research was funded by the Southern Sustainable Agriculture Research and Education (SARE), grant number OS16-096. This material was based upon work supported by the NIFA/USDA, under project number SC-1700533.

The authors would like to thank the Fulbright LASPAU Board for graduate student support. The authors also thank Daniel Milam for serving as the farmer cooperator in the project team, providing land for the research, conducting field operations, and assisting with data collection. Appreciation is extended to Zolian Zoong Lwe, Jordan Withycombe, David Robb, Nicholas Accardo, and Harrison Fried for their support with field activities, and Wayne Chao for help with sample processing. This publication is Technical Contribution No. 6836 of the Clemson University Experiment Station. 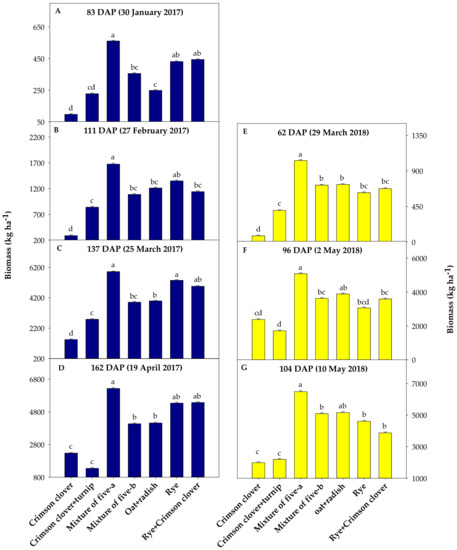 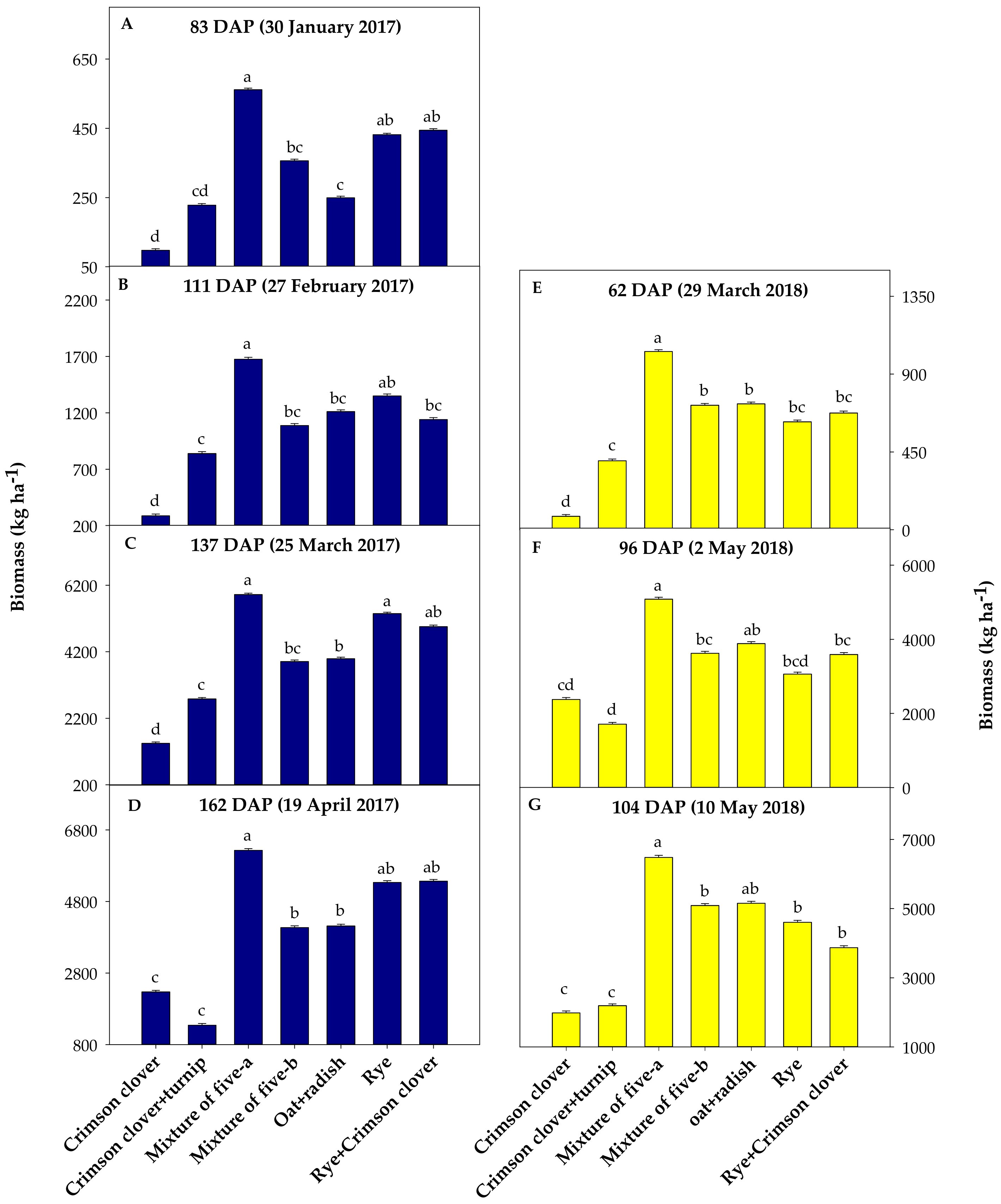