Post-flowering frosts cause appreciable losses to the Australian chickpea industry. The Northern Grains Region (NGR) of Australia, which accounts for nearly 95% of chickpea production in Australia, is frequently subjected to such events. The objective of this study was to map frost risk in chickpea in the NGR and develop strategies to minimise the impacts of such risk. The Agricultural Production System Simulator (APSIM) modelling framework was used to determine spatial and temporal trends in post-flowering frost risk. The NGR could be divided into six broad sub-regions, each delineating locations with similar frost risk. The risk was nearly two to three times greater in the Southern Downs and Darling Downs sub-regions as compared to the Central Queensland Highlands, Dawson Callide, New South Wales, and Northern New South Wales–Western Downs sub-regions. There was an increasing trend in the frequency of frost events in the Southern Downs and New South Wales sub-regions, and a decreasing trend in the Central Queensland Highlands and Dawson Callide sub-regions, consistent with the changing climate of the NGR. In each sub-region, frost risk declined with delayed sowings, but such sowings resulted in simulation of reduced water limited yield potential (unfrosted) as well. The model output was also used to compute 10, 30, 50, and 70% probabilities of the last day of experiencing −3 to 2 °C minimum temperatures and identify the earliest possible sowings that would avoid such temperatures after flowering. Choosing the earliest sowing times with a 30% frost risk could help increase overall yields in environments with high frost risk. Simulations involving genotype x environment x management interactions suggested additional opportunities to minimise frost losses through the adoption of particular cultivars of differing phenology and the use of different agronomy in various environments of the NGR. The study indicates that there is considerable variation in frost risk across the NGR and that manipulating flowering times either through time of sowing or cultivar choice could assist in minimising yield losses in chickpea due to frost. View Full-Text
Keywords: Cicer arietinum L.; APSIM; frost; yield losses Cicer arietinum L.; APSIM; frost; yield losses
►▼ Show Figures 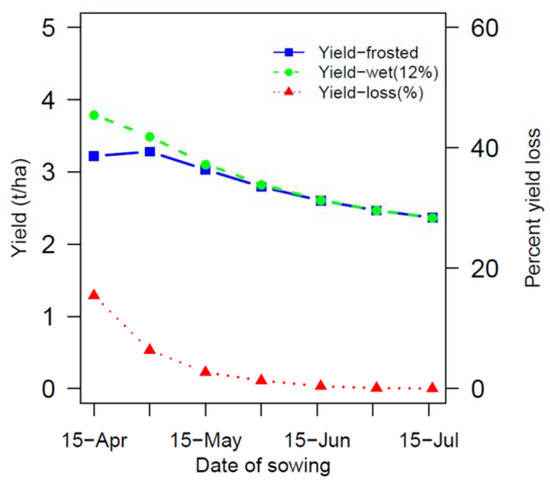