Global climate change is affecting important natural resources including water. Increasing temperature will change rate of evaporation and transpiration, leading to variations in water availability, ground water recharge, and water consumption by plants. Thus, competition for water will be a major future challenge for agriculture. Increasing water productivity at farm level is necessary to increase the efficiency of the irrigation system, plant water−use efficiency (WUE) and to optimize irrigation management. We test the hypothesis that in field−grown, drip−irrigated nectarine trees, the roots in the un−irrigated inter−row soil produce chemical signals that increase in summer to induce stomatal closure and so increase WUE. Concentrations of abscisic acid (ABA) were determined in leaf, root, and xylem sap of drip−irrigated (D) trees in which only about 25% of the soil volume was wetted and compared with those of trees irrigated using microjets (M) in which the whole soil volume was wetted. We also examined the effects of increased ABA on root−to−shoot dry matter ratio, the ratio ABA to indole−3−acetic acid (IAA), sap pH, and fruit and shoot growth. Both D and M trees were maintained at optimal water status as judged by pre−dawn leaf water potentials (about −0.3 MPa). There were no significant differences between treatments in mean fruit size (fruit diameter) or in tree yield (total fruit weight). However, shoot length was strongly reduced in D trees (to 75%) compared to M trees (100%). The concentrations of ABA in the inter−row roots of D trees were increased by 59% and that in the leaves by 13% compared to in the M trees. Despite the similar water status of D and M trees, a clear chemical signal was triggered in terms of a significant increase in the ABA/IAA ratio. This signal influenced leaf stomatal conductance which was 40% lower in D trees than in M trees. The associated responses in photosynthesis and transpiration raised the WUE of D trees by 7%–10% compared to M trees. This field study shows that in drip−irrigated trees, an ABA root−to−shoot signal issues from the inter−row roots growing in soil that dries out during a Mediterranean summer (hot, low rainfall). This ABA−induced WUE increase was achieved principally through reduced stomatal conductance and reduced transpiration. View Full-Text
Keywords: ABA; IAA; sustainable irrigation management; nectarine; hormonal interactions; drip−irrigation ABA; IAA; sustainable irrigation management; nectarine; hormonal interactions; drip−irrigation
►▼ Show Figures 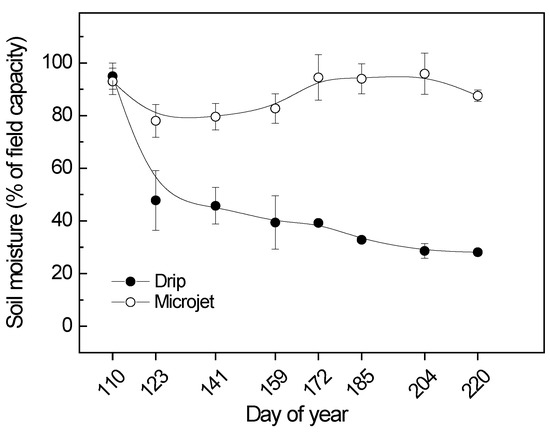