Do We Need New Crops for Arid Regions? A Review of Fruit Species Domestication in Israel
Previous Article in Journal

Comparison of the Effect of Meta-Topolin and Benzyladenine during Daphne mezereum L. Micropropagation

Meta-Topolin (mT) is one of the lesser-known and only recently discovered cytokinins that can be used as an alternative to the commonly used benzyladenine (BA). The experiment aimed to compare the effects of BA and mT on the regeneration from explants of Daphne mezereum, on the levels of several chemical components, the catalase activity, and to assess genetic diversity of microcuttings. The Murashige and Skoog medium (MS) and the woody plant medium (WPM) were used, enhanced with auxin and 1 mg·L−1 mT or 1 mg·L−1 BA. The results suggest that mT has a more positive effect on shoot regeneration. It also positively affected the levels of various compounds which are generally taken as indicative of micro cutting conditions. The levels of chlorophyll and carbohydrates were the highest in microcuttings from the WPM with 0.1 mg·L−1 NAA. Total soluble proteins and amino acids were the highest in plants from the MS medium with 1 mg·L−1 mT. Increased levels of hydrogen peroxide and catalase activity were observed on media with 1 mg·L−1 BA. Screening with 30 randomly amplified polymorphic DNAs (RAPD) and 20 inter-simple sequence repeat (ISSR) primers demonstrated a considerable level of genetic variation among regenerating plants. This variation is attributed to the condition of the starting material (seed propagated); there were no indications that the two cytokinins tested contributed to increased somaclonal variation. View Full-Text
Keywords: biochemical analyzes; cytokinins; in vitro; ISSR markers; RAPD markers; somaclonal variation biochemical analyzes; cytokinins; in vitro; ISSR markers; RAPD markers; somaclonal variation
►▼ Show Figures 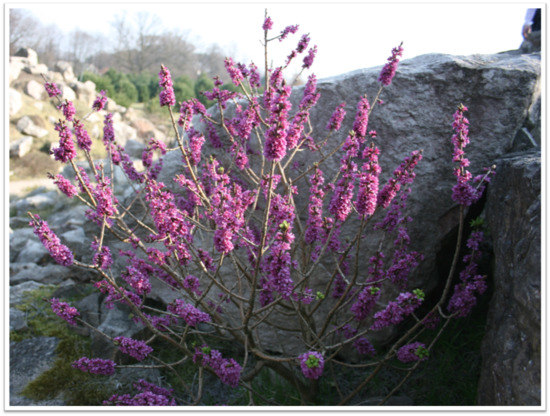