A lignin-based resin (LB) was used to improve the performance of soy flour-based adhesives. Soy flour (SF), polyamidoamine-epichlorohydrin (PAE), and LB were used to develop a plywood adhesive. The solid content and viscosity of the adhesive, the functional groups, the thermo-stability, and the crystallinity of the cured adhesives were characterized, and the performance of the resultant adhesive was evaluated by fabricating three-ply plywood. Results showed that the LB and PAE mixture used to modify the SF adhesive improved both dry and wet bond strength by 66.3% and 184.2%, respectively. Therefore, the PAE improved the wet bond strength, and the LB improved the dry bond strength. The improvement was attributed to: (1) the reaction of LB/PAE with the functions of the soy protein to form a cross-linking network; (2) a polycondensation reaction between the LB molecules improved the crosslinking density of the adhesive to form an interpenetration structure with cross-linked proteins; and (3) the easy penetration of the LB into the wood surface that enhanced interlocking between the wood and adhesive. Furthermore, the denser structure created by the LB and the PAE mixture improved thermal stability and decreased the crystallinity of the cured adhesive. The use of the LB and the PAE mixture increased the solid content by 35.5%, while still making its viscosity acceptable for industrial applications. View Full-Text
Keywords: soy flour; lignin; adhesive; plywood; bond strength soy flour; lignin; adhesive; plywood; bond strength
►▼ Show Figures 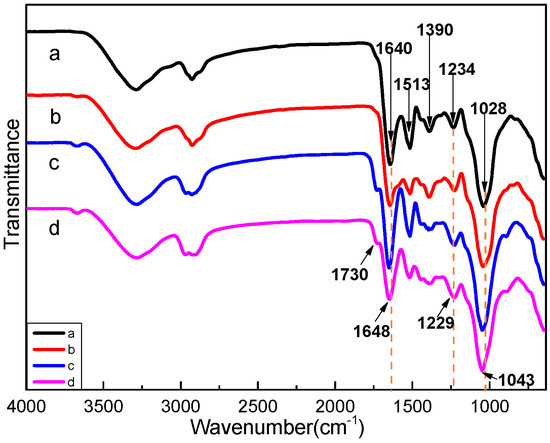