Biopolymers such as polysaccharides, proteins, and nucleic acids are common in Nature and play important in vivo roles [1,2,3]. The biological functions of polymers such as polysaccharides are achieved through both their primary chemical structures and controlled higher-order structure. Amylose is a natural linear polysaccharide with a left-handed helical conformation, which consists of glucose residues linked through α(1→4)-glycosidic linkages [3]. It is a main component of starch and functions as an energy storage molecule with the other component of starch, amylopectin. The seclusion of hydroxy groups in the glucose units to the outer side of the helix creates a hydrophobic cavity inside the helices. Therefore, amylose can act as a host to form host-guest inclusion complexes with hydrophobic guest molecules of low molecular weight through hydrophobic interactions (Figure 1) [4,5]. In addition to the traditional functions of these inclusion complexes, they can be manipulated to form higher-order materials with extended functionalities and properties suitable for specific practical applications. Polymeric guest molecules with high molecular weights are promising candidates for complexation with amylose, compared to low molecular weight guests, to achieve new functionalities. However, a limited number of studies have been reported on the complexation of amylose and polymeric guest molecules (Figure 1). Because weak hydrophobic interactions drive the incorporation of guest molecules into the amylose cavity, amylose does not have the ability to encapsulate large polymeric guests into its cavity. For the direct incorporation of polymeric guests, hydrophilic groups can be introduced at the polymer chain ends, which enhance the degree of complexation in aqueous media [6,7]. Additional methods to directly form amylose-polymer inclusion complexes include inclusion polymerization and guest-exchange approaches [8,9,10].
Recently, it has been accepted that the enzymatic approach is a powerful tool to precisely synthesize polysaccharides [11,12,13,14,15,16], and amylose with a well-defined structure can be synthesized by phosphorylase-catalyzed enzymatic polymerization of α-d-glucose 1-phosphate (G-1-P) and maltooligosaccharide as a monomer and primer, respectively (Figure 2) [17,18,19,20]. The polymerization is analogous to living polymerization because there are no significant termination or chain-transfer reactions. Accordingly, the molecular weight of the produced amylose can be controlled by monomer/primer feed ratios and typically result in narrow distributions [21]. By means of this enzymatic polymerization for the direct production of amylose, we developed an efficient method for the formation of inclusion complexes with synthetic polymers. The elongation of the short α(1→4)-glucan (maltooligosaccharide) to the longer α(1→4)-glucan (amylose) is considered to provide sufficient dynamic field for more facile complexation of polymeric guests compared to the direct complexation between the polymeric host (amylose) and guest [22,23,24,25,26,27]. The polymerization propagation is similar to the way that the vines of plants grow, twining around a rod (Figure 3). Accordingly, we proposed that this polymerization method for the production of amylose-polymer inclusion complexes should be called “vine-twining polymerization”. Furthermore, the vine-twining approach has been applied to the dynamic preparation of supramolecular networks/higher-order materials [28]. This review summarizes the preparation and material application of amylose-polymer inclusion complexes fabricated by the vine-twining polymerization approach achieved in our research group.

The vine-twining polymerization approach has been applied to the fabrication of hierarchical structured materials, such as gels and films, based on amylose-polymer inclusion complexes [28]. To construct such materials, supramolecular networks, which are hierarchically composed of inclusion complexes as crosslinking points, were designed as vine-twining polymerization products by using graft copolymers with hydrophobic graft chains. Significantly, the enzymatically produced amylose chains include the hydrophobic graft chains as guest polymers to produce inclusion complexes, which act as crosslinking points to hierarchically construct a supramolecular network structure in aqueous media, forming hydrogels (Figure 6). The hydrophobicity of the graft chains as guest polymers is necessary, while the graft copolymer should generally be water-soluble to successfully form hydrogels.
The hierarchical formation of a hydrogel was achieved by the phosphorylase-catalyzed polymerization of G-1-P from G7 in the presence of a water-soluble copolymer composed of hydrophobic PVL graft chains, poly(acrylic acid sodium salt-graft-δ-valerolactone) (P(AA-Na-g-VL)), by vine-twining polymerization (Figure 6) [39]. The enzymatic reaction mixture was completely converted into the hydrogel form. The enzymatically produced amylose included the PVL graft chains to form inclusion complexes as the polymerization progressed, which acted as cross-linking points for hydrogelation. Furthermore, the hydrogels were enzymatically disrupted and reproduced through combination of the β-amylase-catalyzed hydrolysis of amylose and the reformation of amylose by the phosphorylase-catalyzed polymerization.
A film was constructed through the hierarchical formation of a hydrogel by vine-twining polymerization using another graft copolymer, carboxymethyl cellulose sodium salt-graft-poly(ε-caprolactone) (NaCMC-g-PCL) (Figure 6). The reaction mixture was completely converted into the hydrogel by the vine-twining polymerization [40]. The film was formed by moisturizing the powdered sample prepared by lyophilization of the hydrogel.
The mechanical properties of the hydrogels obtained by vine-twining polymerization using PAA-Na-g-PVL and NaCMC-g-PCL were insufficient for further applications. To improve the mechanical properties of the hydrogels, poly(γ-glutamic acid) (PGA) was used as the main-chain of a graft copolymer (Figure 6) [41], because its shows better water retention and moisturizing properties. Indeed, vine-twining polymerization using poly(γ-glutamic acid)-graft-poly(ε-caprolactone) (PGA-g-PCL) resulted in a hydrogel with self-standing properties, indicating much better mechanical properties compared to the aforementioned hydrogels. The prepared hydrogel exhibited macroscopic interfacial healing behavior upon the phosphorylase-catalyzed enzymatic polymerization. The hydrogel formed initially from the vine-twining polymerization was cut into two pieces, and G-1-P and phosphorylase-containing sodium acetate buffer was dropped on the surface of the hydrogels. After the surfaces were placed in contact with one another, the materials were left standing for enzymatic polymerization. Consequently, the two hydrogel pieces were fused at the contacted area. Such behavior of the hydrogels on a macroscopic level was induced by the complexation of the enzymatically produced amyloses with the PCL graft chains at the interface. In addition, a porous cryogel and an ion gel were obtained by lyophilization and soaking of the hydrogel in an ionic liquid of 1-butyl-3-methylimidazolium chloride (BMIMCl) (Figure 6).
Supramolecular polymers composed of amylose-PTHF and amylose-PLLA inclusion complexes were dynamically formed by vine-twining polymerization using primer–guest conjugates, i.e., maltoheptaose-block-polytetrahydrofuran (G7-block-PTHF) and maltoheptaose-block-poly(l-lactide) (G7-block-PLLA, Figure 7a) [42,43]. In these systems, an enzymatically propagating amylose chain included a PTHF or PLLA segment of another conjugate, whereby consecutive inclusion led to the formation of linear supramolecular polymers.
Vine-twining polymerization using a branched maltoheptaose-(poly(l-lactide))2 (G7-PLLA2) conjugate resulted in a hyperbranched supramolecular polymer (Figure 7b) [44]. The hyperbranched product formed an ion gel with BMIMCl, which was further converted into a hydrogel upon exchange of the dispersion media by soaking in water. Lyophilization of the resulting hydrogel produced a porous cryogel.
The relative chain orientation of amylose and PLLA in the supramolecular polymers was investigated using two G7-block-PLLA conjugates, which were composed of a G7 moiety interconnected to the carboxylate or hydroxy terminus of PLLA [45]. Enzymatic polymerization in the presence of the two PLLA conjugates formed amylose-PLLA supramolecular polymers by vine-twining polymerization. This suggested that, regardless of the chain orientation of PLLA, the amylose cavity recognized the PLLA segment for complexation. Conversely, the phosphorylase-catalyzed enzymatic polymerization in the presence of the two G7-block-PDLA conjugates under similar conditions only resulted in the formation of amylose-PDLA diblock copolymers, which did not form an inclusion complex structure. These results indicated that chirality in PLAs affected the inclusion behavior of the amylose cavity, irrespective of the PLA chain orientation. The left-handed helices of both the amylose and PLLA induce inclusion complexation, whereas complexation was not significantly affected by the orientation of the methyl substituents in PLA, which oppositely change according to the relative chain orientation.

The authors are indebted to the co-workers, whose names are found in references from their papers, for their enthusiastic collaborations. The authors also gratefully thank for financial supports from a Grant-in-Aid for Scientific Research from Ministry of Education, Culture, Sports, and Technology, Japan (No. 14550830, 17550118, 19550126, 24350062, and 17K06001) and Sekisui Foundation.

The manuscript was written through contributions of all authors. All authors have given approval to the final version of the manuscript. 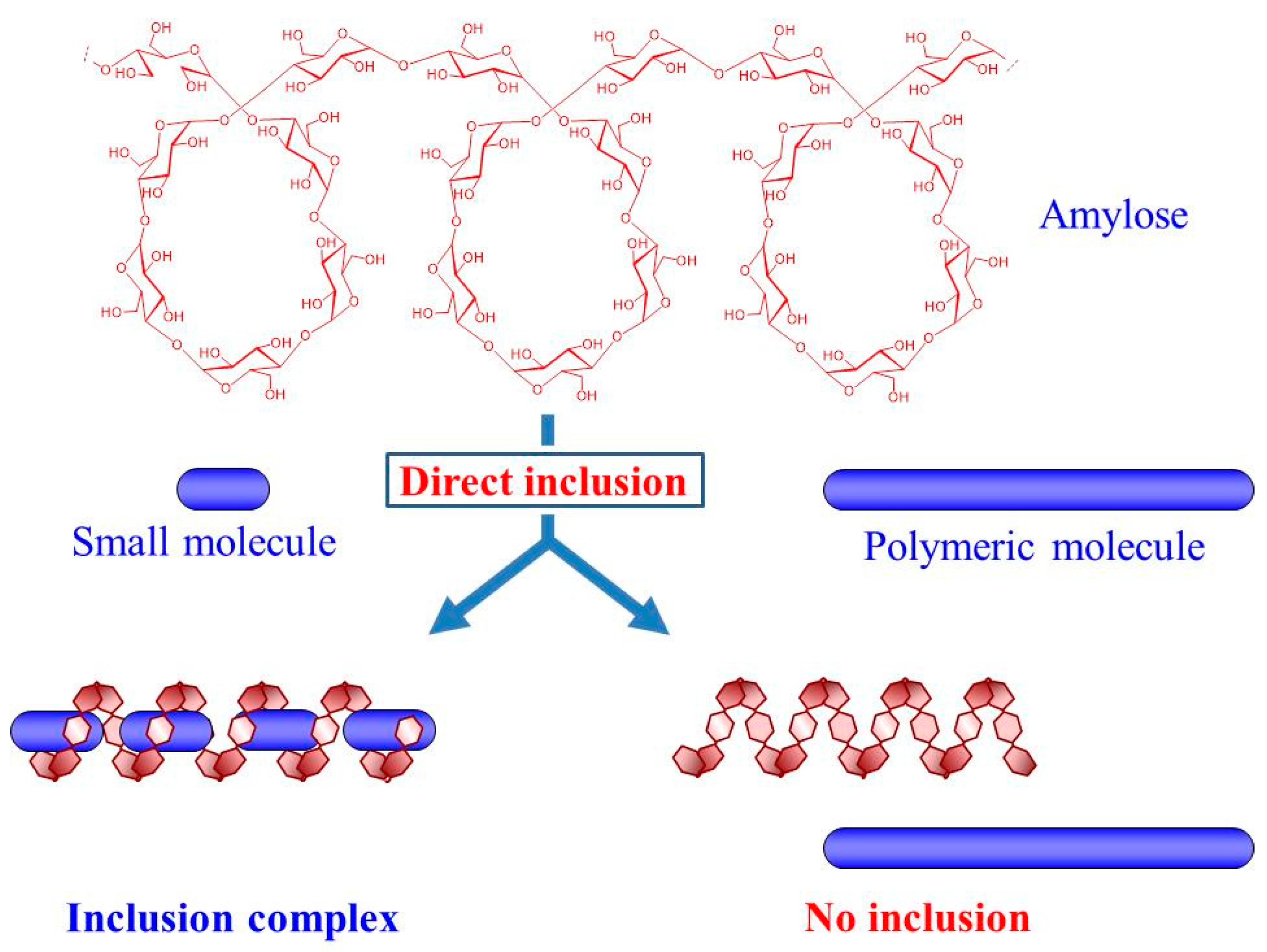 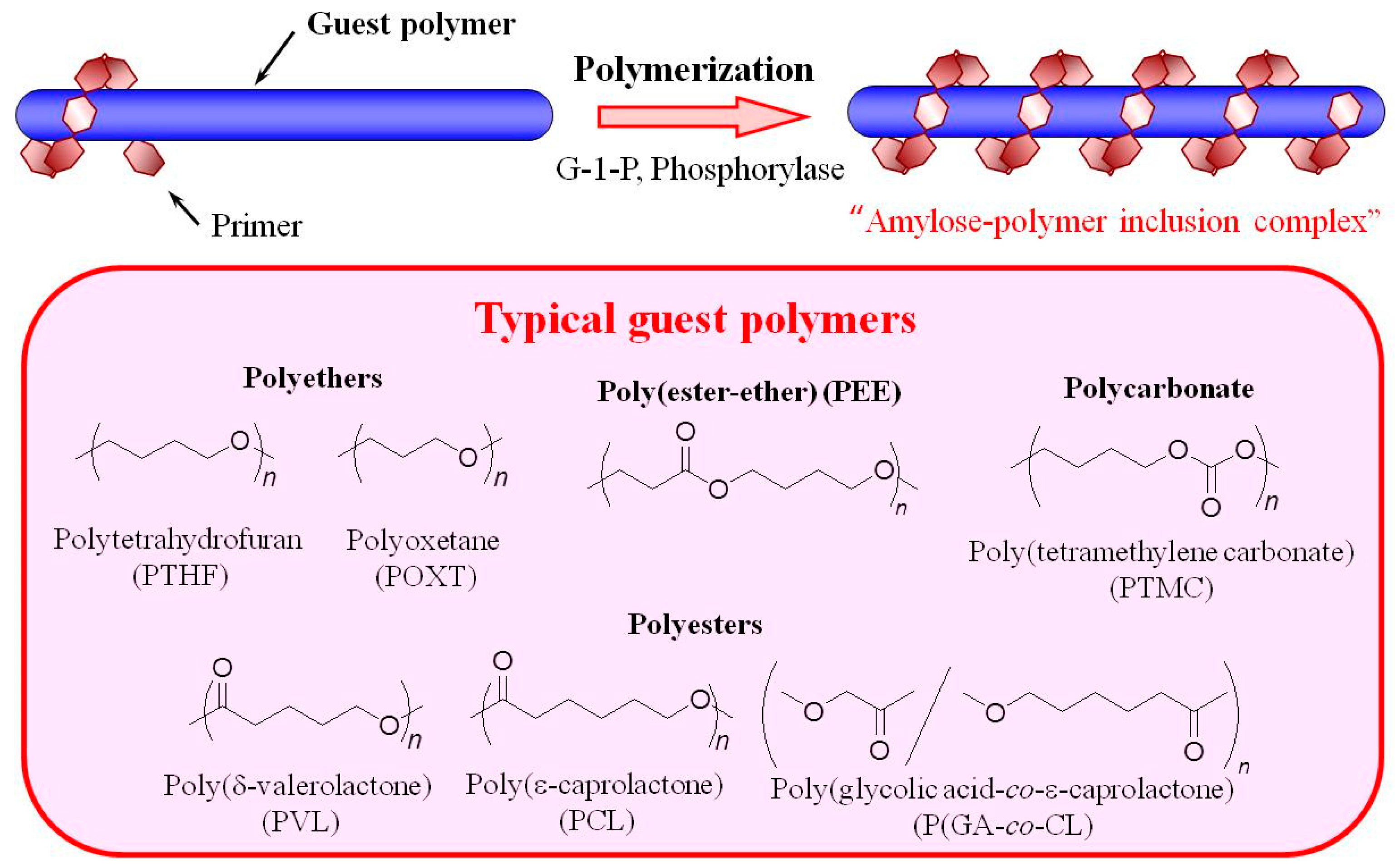 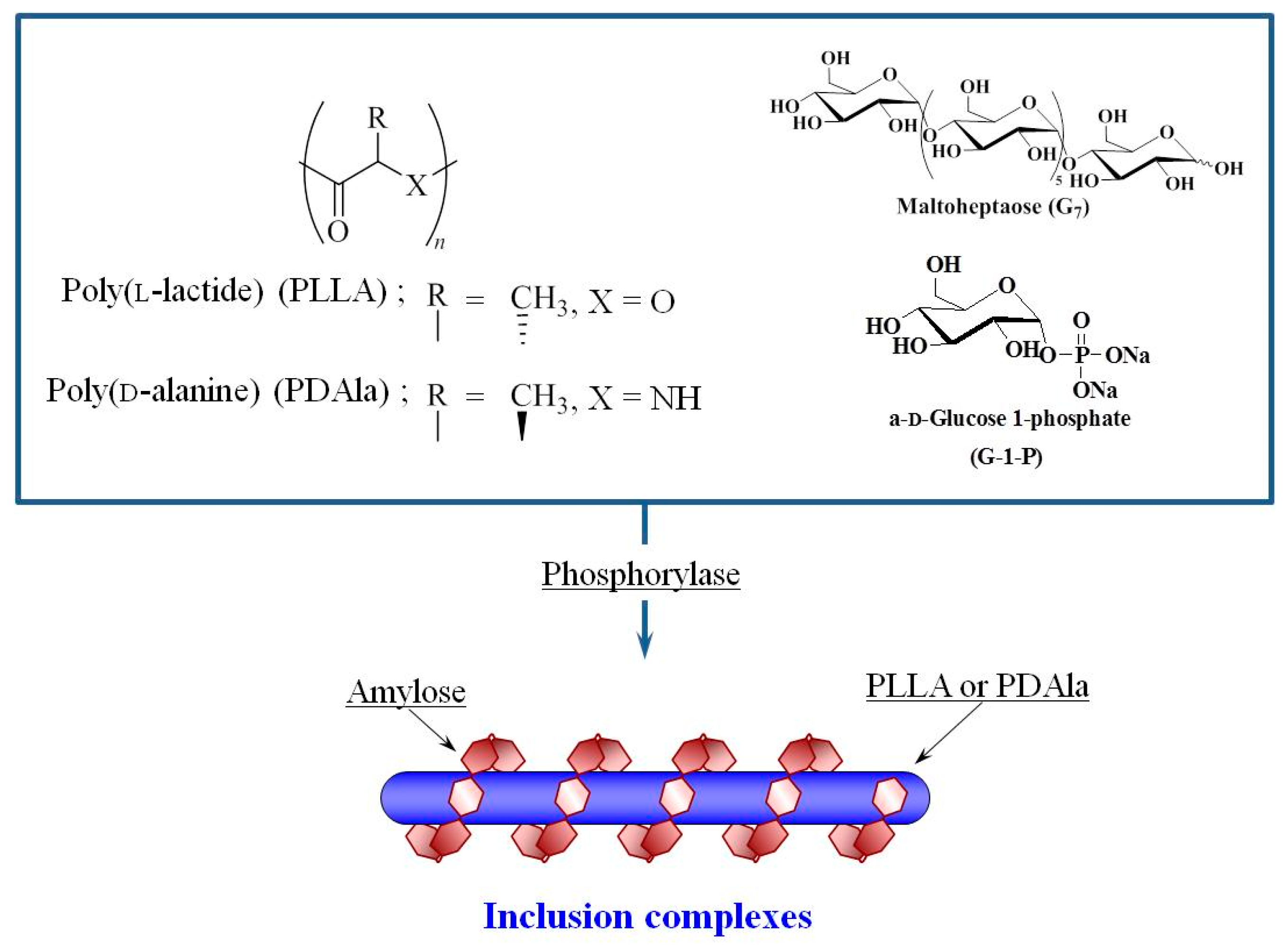 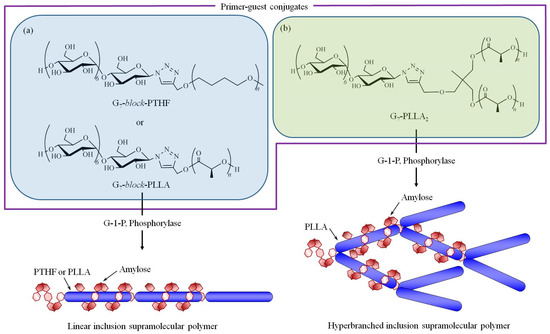 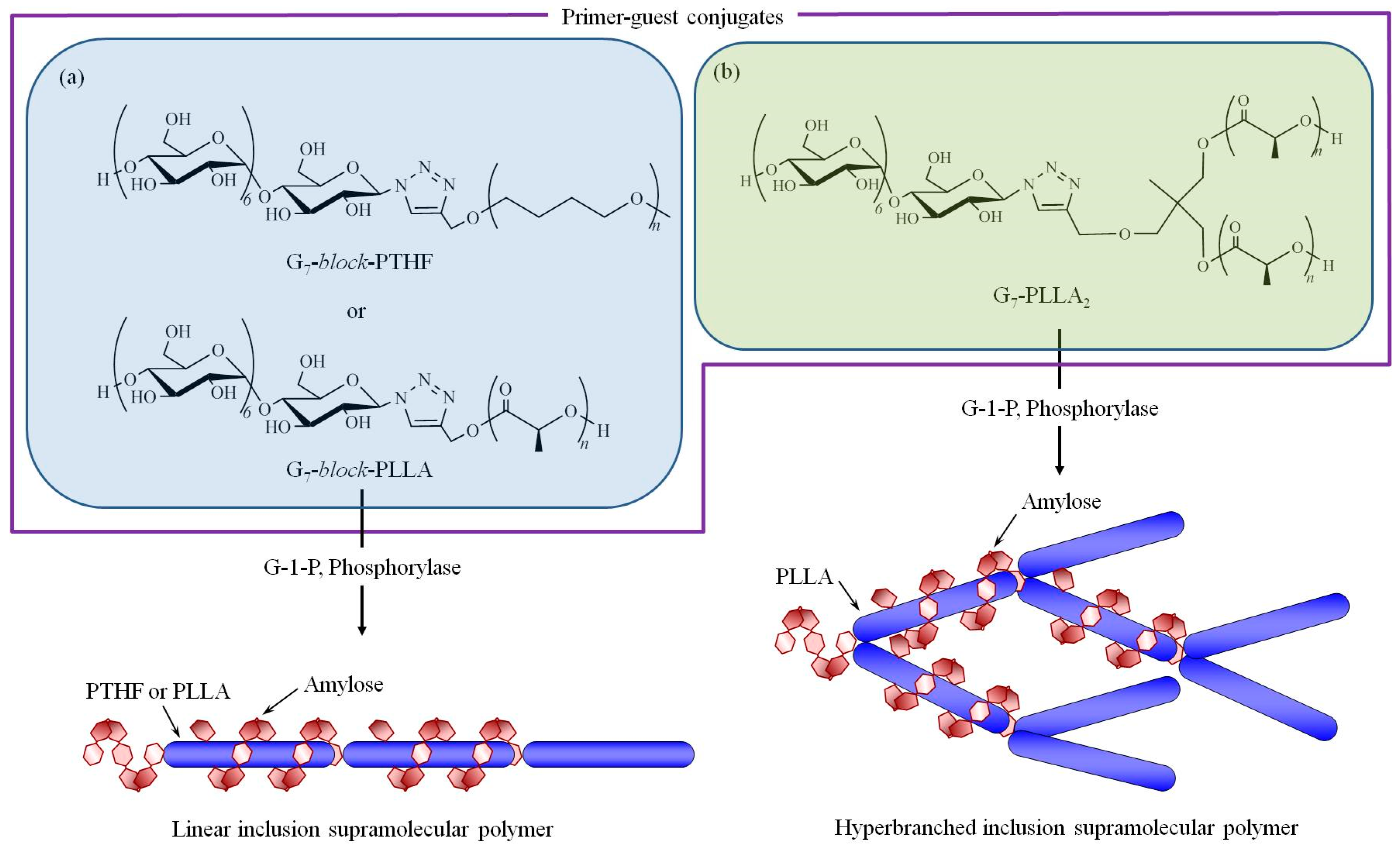