This paper reviews the development of new high-temperature polymeric materials applicable to plastic substrates in image display devices with a focus on our previous results. Novel solution-processable colorless polyimides (PIs) with ultra-low linear coefficients of thermal expansion (CTE) are proposed in this paper. First, the principles of the coloration of PI films are briefly discussed, including the influence of the processing conditions on the film coloration, as well as the chemical and physical factors dominating the low CTE characteristics of the resultant PI films to clarify the challenges in simultaneously achieving excellent optical transparency, a very high Tg, a very low CTE, and excellent film toughness. A possible approach of achieving these target properties is to use semi-cycloaliphatic PI systems consisting of linear chain structures. However, semi-cycloaliphatic PIs obtained using cycloaliphatic diamines suffer various problems during precursor polymerization, cyclodehydration (imidization), and film preparation. In particular, when using trans-1,4-cyclohexanediamine (t-CHDA) as the cycloaliphatic diamine, a serious problem emerges: salt formation in the initial stages of the precursor polymerization, which terminates the polymerization in some cases or significantly extends the reaction period. The system derived from 3,3′,4,4′-biphenyltetracarboxylic dianhydride (s-BPDA) and t-CHDA can be polymerized by a controlled heating method and leads to a PI film with relatively good properties, i.e., excellent light transmittance at 400 nm (T400 = ~80%), a high Tg (>300 °C), and a very low CTE (10 ppm·K−1). However, this PI film is somewhat brittle (the maximum elongation at break, εb max is about 10%). On the other hand, the combination of cycloaliphatic tetracarboxylic dianhydrides and aromatic diamines does not result in salt formation. The steric structures of cycloaliphatic tetracarboxylic dianhydrides significantly influence the polymerizability with aromatic diamines and the CTE values of the resultant PI films. For three isomers of hydrogenated pyromellitic dianhydride, the steric structure effect on the polymerizability and the properties of the PI films is discussed. 1,2,3,4-Cyclobutanetetracarboxylic dianhydride (CBDA) is a very unusual cycloaliphatic tetracarboxylic dianhydride that is suitable for reducing the CTE. For example, the PI system derived from CBDA and 2,2′-bis(trifluoromethyl)benzidine (TFMB) yields a colorless PI film with a relatively low CTE (21 ppm·K−1). However, this PI is insoluble in common organic solvents, which means that it is neither solution-processable nor compatible with the chemical imidization process; furthermore, the film is somewhat brittle (εb < 10%). In addition, the effect of the film preparation route on the film properties is shown to be significant. Films prepared via chemical imidization always have higher optical transparency and lower CTE values than those prepared via the conventional two-step process (i.e., precursor casting and successive thermal imidization). These results suggest that compatibility with the chemical imidization process is the key for achieving our goal. To dramatically improve the solubility in the CBDA-based PI systems, a novel amide-containing aromatic diamine (AB-TFMB), which possesses the structural features of TFMB and 4,4′-diaminobenzanilide (DABA), is proposed. The CBDA(70);6FDA(30)/AB-TFMB copolymer has an ultra-low CTE (7.3 ppm·K−1), excellent optical transparency (T400 = 80.6%, yellowness index (YI) = 2.5, and haze = 1.5%), a very high Tg (329 °C), sufficient ductility (εb max > 30%), and good solution-processability. Therefore, this copolymer is a promising candidate for use as a novel coating-type plastic substrate material. This paper also discusses how the target properties can be achieved without the help of cycloaliphatic monomers. Thus, elaborate molecular design allows the preparation of highly transparent and low-CTE aromatic poly(amide imide) and poly(ester imide) systems. View Full-Text
Keywords: polyimides; optical transparency; low linear coefficients of thermal expansion (CTE); toughness; solution-processability; plastic substrates in image display devices polyimides; optical transparency; low linear coefficients of thermal expansion (CTE); toughness; solution-processability; plastic substrates in image display devices
►▼ Show Figures 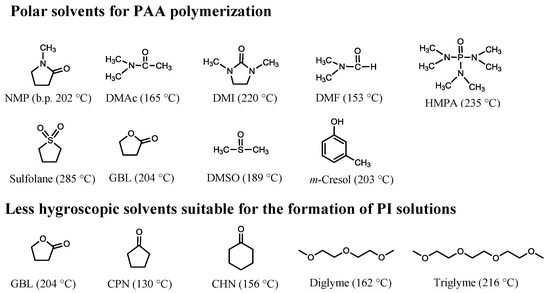