Influence of Chain Stiffness, Grafting Density and Normal Load on the Tribological and Structural Behavior of Polymer Brushes: A Nonequilibrium-Molecular-Dynamics Study

:
A new route towards embedding fibrillated cellulose in a non-polar thermoset matrix without any use of organic solvent or chemical surface modification is presented. It is shown that microfibrillated lignocellulose made from cellulose with high residual lignin content is capable of stabilising an emulsion of unsaturated polyester resin in water due to its amphiphilic surface-chemical character. Upon polymerisation of the resin, thermoset microspheres embedded in a microfibrillated cellulose network are formed. The porous network structure persists after conventional drying in an oven, yielding a mechanically stable porous material. In an application experiment, the porous material was milled into a fine powder and added to the polyester matrix of a glass fibre-reinforced composite. This resulted in a significant improvement in fracture toughness of the composite, whereas a reduction of bending strength and stiffness was observed in parallel.
Keywords:
microfibrillated cellulose; unsaturated polyester resin; suspension polymerization; composite reinforcement

The enormous potential of nanocellulose, i.e., nano-scale cellulose fibrils or crystals, towards novel composite materials with improved or wholly new functionalities is widely acknowledged [1,2,3,4,5,6]. Among the challenges to be overcome on the way to realising this potential for industrial applications, the lack of inherent surface-chemical compatibility between essentially hydrophilic cellulose and many hydrophobic polymers and organic solvents is of high relevance. Chemical surface modification is capable of fine-tuning the degree of hydrophobicity of nanocellulose, and highly capable of producing excellent dispersions of nanocellulose in hydrophobic media [7]. However, even though highly efficient when dealing with small quantities of material in the laboratory, the up-scaling of chemical modification raises questions concerning its feasibility at reasonable cost. Drying, another option for transferring nanocellulose from its native aqueous state to non-aqueous environments, is energy-intensive and of limited efficiency with regard to preserving the nano-scale morphology of nanocellulose [8]. Thus, the challenges of interfacial compatibility and the lack of a technically- and economically efficient drying method need to be overcome with regard to a widespread utilisation of nanocellulose in thermoplastic or thermoset matrix composites. Compared to thermoplastic matrices, literature on nanocellulose-thermoset composites is relatively sparse. Procedures described in the latter case usually involve the infiltration of an existing nanofiber network with reactive oligomers, which is followed by solvent evaporation and curing [9,10,11,12].
Emulsions were proposed as novel and elegant routes to the compounding of nanocellulose with hydrophobic media [13]. For example, a stable nanocomposite dispersion was obtained by miniemuelsion polymerisation of acrylic monomers in the presence of cellulose nanocrystals and a silane coupling agent [14]. Polystyrene-nanocellulose composite microbeads were polymerised from emulsion [15]. Polymethylmethacrylate-nanocellulose composites were successfully obtained in suspension polymerization [16,17]. Bacterial cellulose hydrophobised by means of silylation or acetylation, respectively, was used to stabilise medium and high internal phase water-in-acrylated soybean oil emulsions in the production of fully bio-based macroporous thermosetting cellulose nanocomposite [18]. Microbeads and hollow microcapsules were obtained by self-assembly of pickering magneto-responsive nanocellulose [19]. Finally, a route for the compatibilisation of aqueous dispersions of cellulose nanofibrils with a non-polar polystyrene matrix was introduced using an emulsion route involving non-ionic surfactants [20]. A comparable approach was recently realised for chitin nanofibers and an acrylic resin [21]. In this study, an emulsion of resin was produced and stabilised by chitin nanofibers. Instead of polymerisation directly in suspension, however, filtration was performed, yielding a resin-nanofibre compound which was subsequently dried and cured to obtain a solid nanofiber-reinforced polymer sheet.
Recently, it was shown that the surface-chemical amphiphilicity of lignin benefits the dispersion of nanocellulose in non-polar anorganic media [22,23,24]. Using the example of styrene monomer, lignocellulose nanofiber-reinforced composites with superior impact strength were produced from polystyrene-lignocellulose composite microspheres obtained in suspension polymerization [25]. Notably, neither chemical surface modification, nor drying or transfer to organic solvent were used in this study in order to arrive at a high-performance composite of essentially polar nanocellulose and polystyrene.
In the present study, we show that—in a similar way—microfibrillated lignocellulose stabilises emulsions of unsaturated polyester resin in water which, upon polymerisation, produces polyester-lignocellulose composite microspheres. A potential application perspective of this material as additive to the matrix of fibre-reinforced polyester composites is presented.

The production of microfibrillated lignocellulose used in the present study is described in detail in Ref. [25]. Briefly, beech wood chips were partly delignified in an autoclave by means of a water/ethanol (50/50 weight) mixture containing 0.75 wt % H2SO4 as a catalyst. The temperature during the 90 min treatment was kept at 170 °C, resulting in a pressure of 1.5 MPa. After depressurisation and cooling the treated material was repeatedly washed and disintegrated into nano-scale fibrillary materials by subsequent treatment with a disc-refiner, a Masuko supermasscollider, and an APV high-pressure homogeniser. The material produced this way is termed microfibrillated lignocellulose (MFLC). For reference purposes, standard microfibrillated cellulose (MFC) was obtained from the University of Maine and was homogenized before use (15 cycles, 80 MPa).

The unsaturated polyester resin used was Palatal U 569 TV-01 obtained from R&G Composite Technology, Waldenbuch, Germany. Methylethylketoneperoxide hardener (2% w/w) was added before use. The resin was dispersed in 90 mL of aqueous fibril suspension containing 0.5% (w/w) fibrils by means of an ultra-turrax device. The amounts of resin added were 1, 2, 5, and 10 mL. For polymerisation, 6 mL of the mixture was enclosed in a 10 cm−3 sealable polytetrafluoroethylene reaction vessel and left in an oven at 103 °C for 2 h. After de-pressurisation and cooling the reaction product was dried conventionally in the same oven at 103 °C. For characterisation and further experiments, the dry reaction product was either milled to rectangular shape using a razor blade or disintegrated into fine powder by means of a ceramic mortar.

The same unsaturated polyester resin with 2% hardener mentioned above was either used as received, or modified by adding 1% (w/w) of cellulose-polyester powder. Plain weave glass fibre mats with an area weight of 163 g·m−2 obtained from R&G Composite Technology, Germany, were impregnated with a roller and stacked to 15 plies. Curing was performed in a press operated at room temperature and a platen distance of 2.5 mm, resulting in a volumetric fibre content of roughly 25% in the composite sheets. Before characterisation the composites were post-cured in an oven at 80 °C for 12 h as recommended by the manufacturer. In parallel, samples of resin were also cured without adding glass fibre in order to characterise pure resin properties.

The surface chemistry of dry microfibrillated cellulose was characterised by means of X-ray photoelectron spectroscopy (XPS) using a K-Alpha spectrometer (Thermo Fischer Scientific, Waltham, MA USA). Survey scans were done with a pass energy of 200 eV and a step size of 1.0 eV. High resolution scans of the carbon peak region were done with a pass energy of 50 eV and a step size of 0.1 eV. All spectra were normalized to the Au peak. The average chemical composition was calculated from wide scan spectra. The peaks in the high resolution spectra were fitted using a Gaussian/Lorentzian mixed function employing Shirley background correction.
MFLC was characterised with atomic force microscopy (AFM). AFM was done in tapping mode using a Dimension Icon AFM (Bruker, Karlsruhe, Germany) and standard tapping mode probes by the same manufacturer. Sample preparation for AFM was accomplished by placing a drop of the respective 0.001 wt % aqueous fibril suspension onto freshly cleaved mica, and evaporating the water at ambient conditions.
Liquid emulsions of unsaturated polyester resin were observed with a Zeiss Axioplan fluorescence microscope using Nile Red, Nile Blue and Calcoflour white stain. SEM of dry polymerised material was carried out using a Quanta™ 250 scanning electron microscope (FEI Europe B.V., Vienna, Austria) with a Shottky field emission gun after sputter coating the samples with gold.
Mechanical characterisation was carried out in three-point bending tests with a Zwick-Roell 20 kN universal testing machine equipped with a 20 kN load cell. Testing was done at a free tested sample length of 60 mm and a cross-head speed of 10 mm·min−1. Impact bending was performed on a Zwick-Roell instrumented Charpy 5N impact pendulum at a support distance of 60 mm (i.e., tested length). For both tests, 10 replicate samples with a total length of 100 mm and a width of 10 mm were used. Interlaminar shear strength testing was carried out in short beam shear testing according to ASTM (American Society of the International Association for Testing and Materials) D2344.
Thermogravimetric analysis (TGA) of unmodified and modified cured polyester resin was done with an STA 409PC/PG (Netzsch, Selb, Germany). Using aluminium crucibles 10 mg of sample were analysed in nitrogen atmosphere at a heating rate of 5 °C·min−1.

The results presented above demonstrate that MFLC is capable of stabilising emulsions of unsaturated polyester resin in water. This enables the direct polymerisation of the resin in suspension, leading to a porous fibrillary compound of polyester microspheres and micro-fibrillar MFLC. One potential application route of this new material in terms of modifying the matrix polymer in glass fibre reinforced composites was examined and a positive effect on impact performance was obtained, whereas bending strength and stiffness were diminished.

The authors are very grateful for financial support from Special Fund for Forestry Research in the Public Interest (Project 201204702) and the support from the China Scholarship Council (CSC). 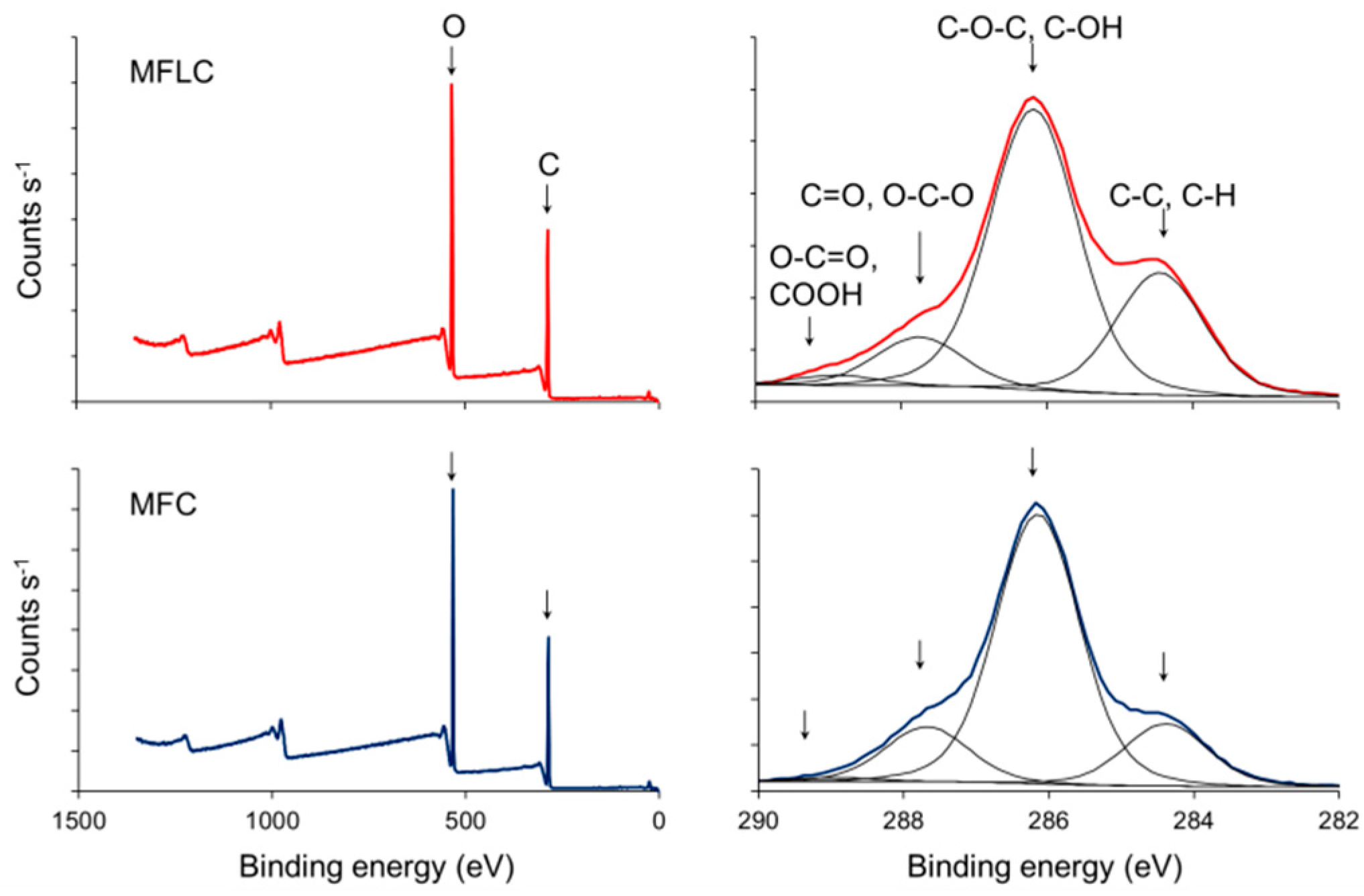 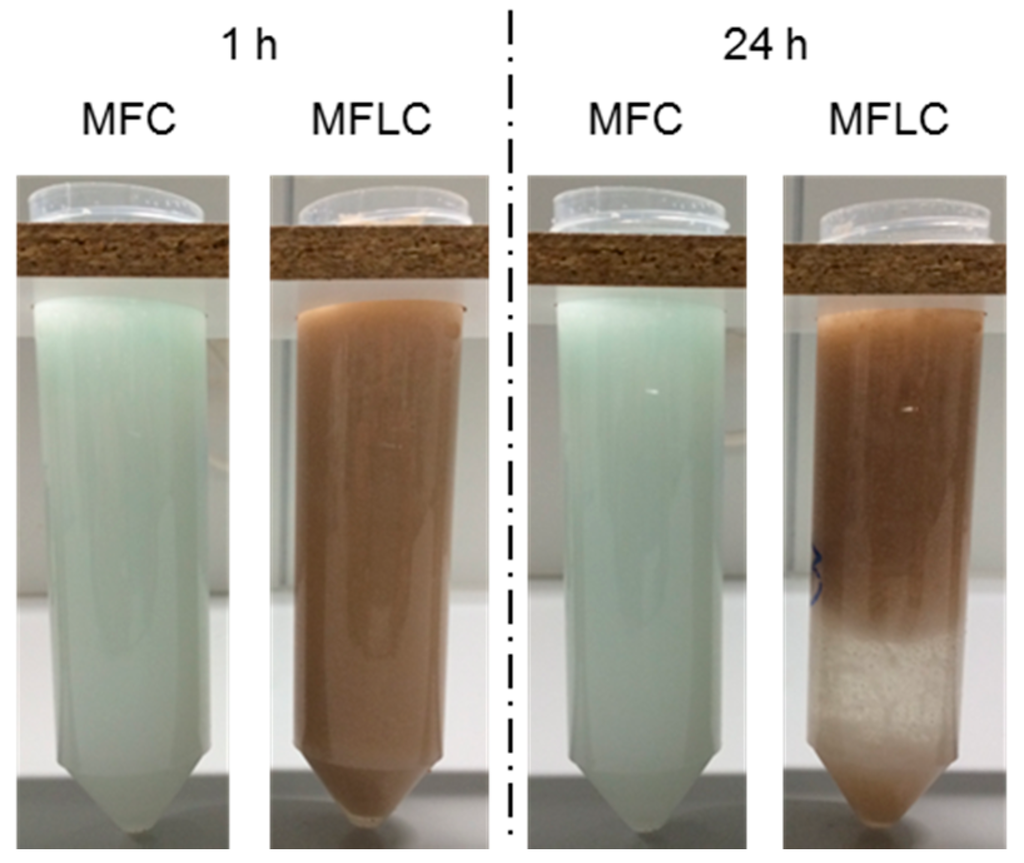 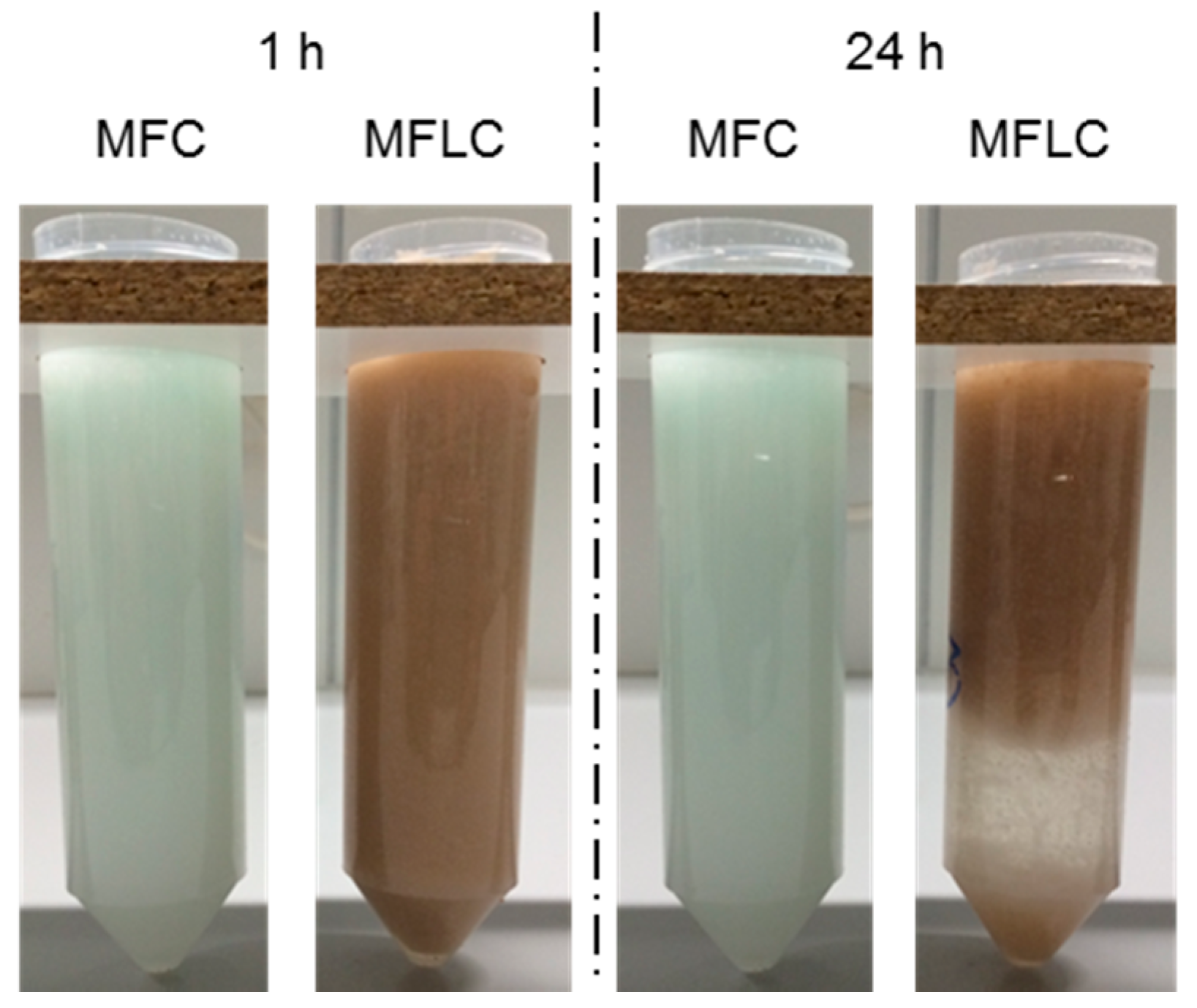 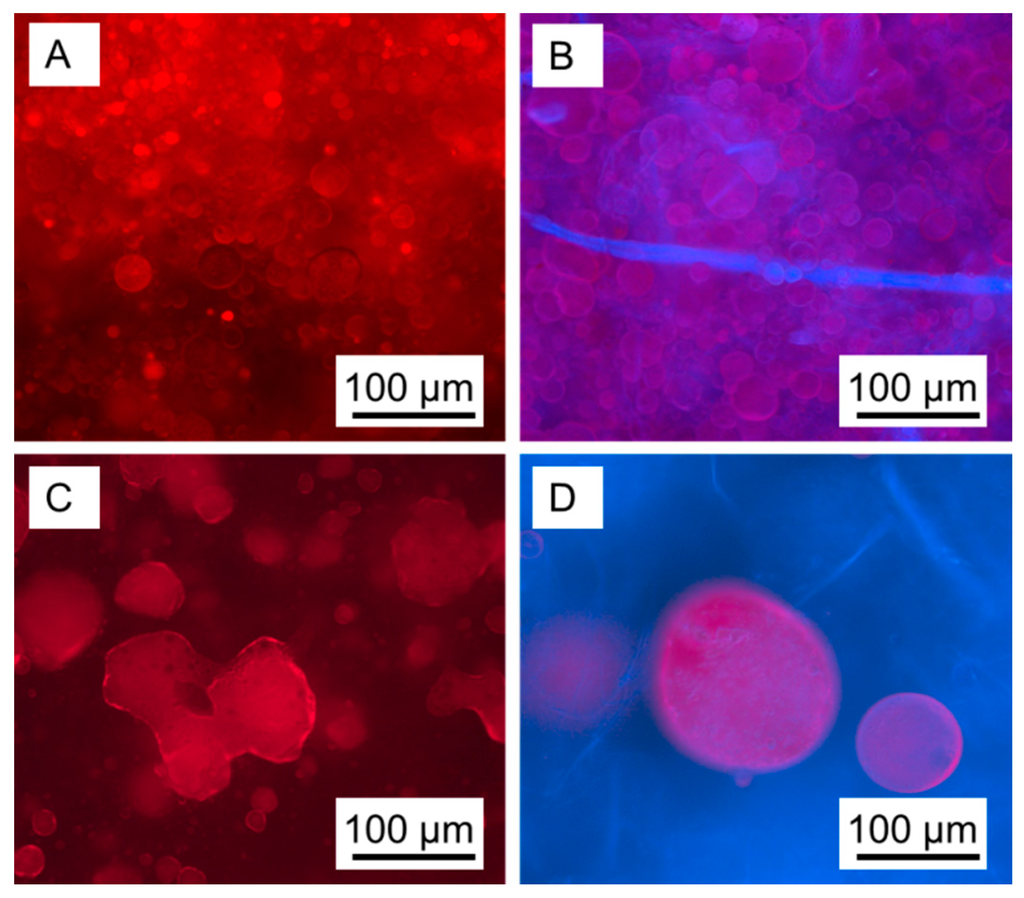 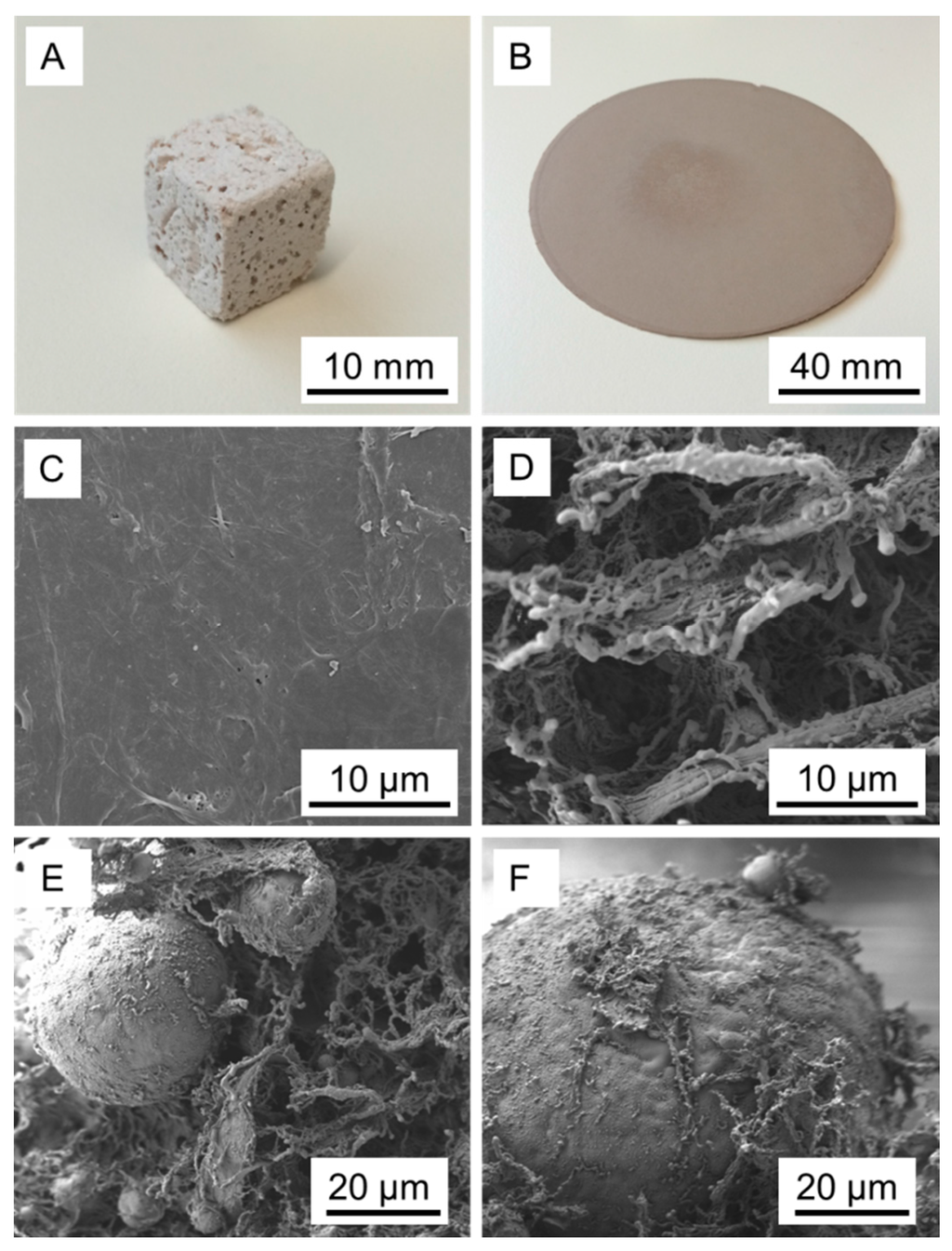 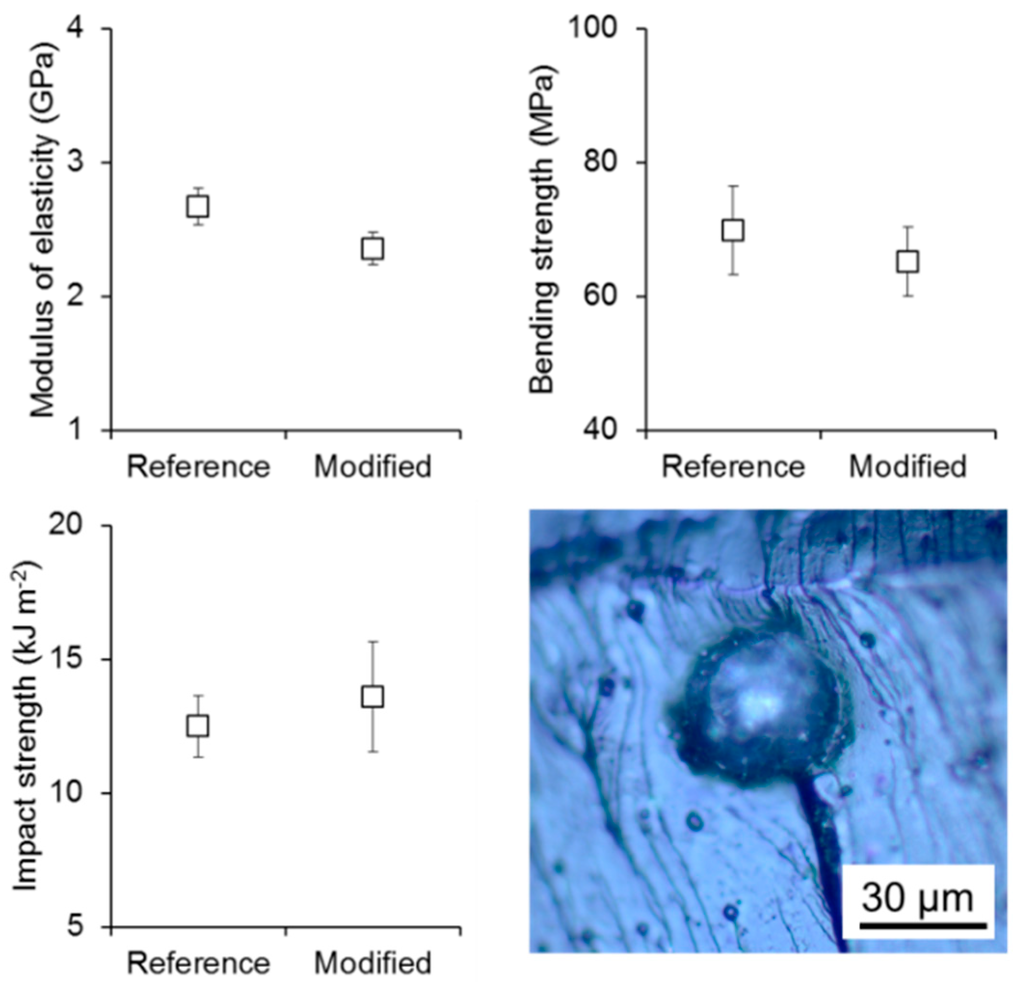 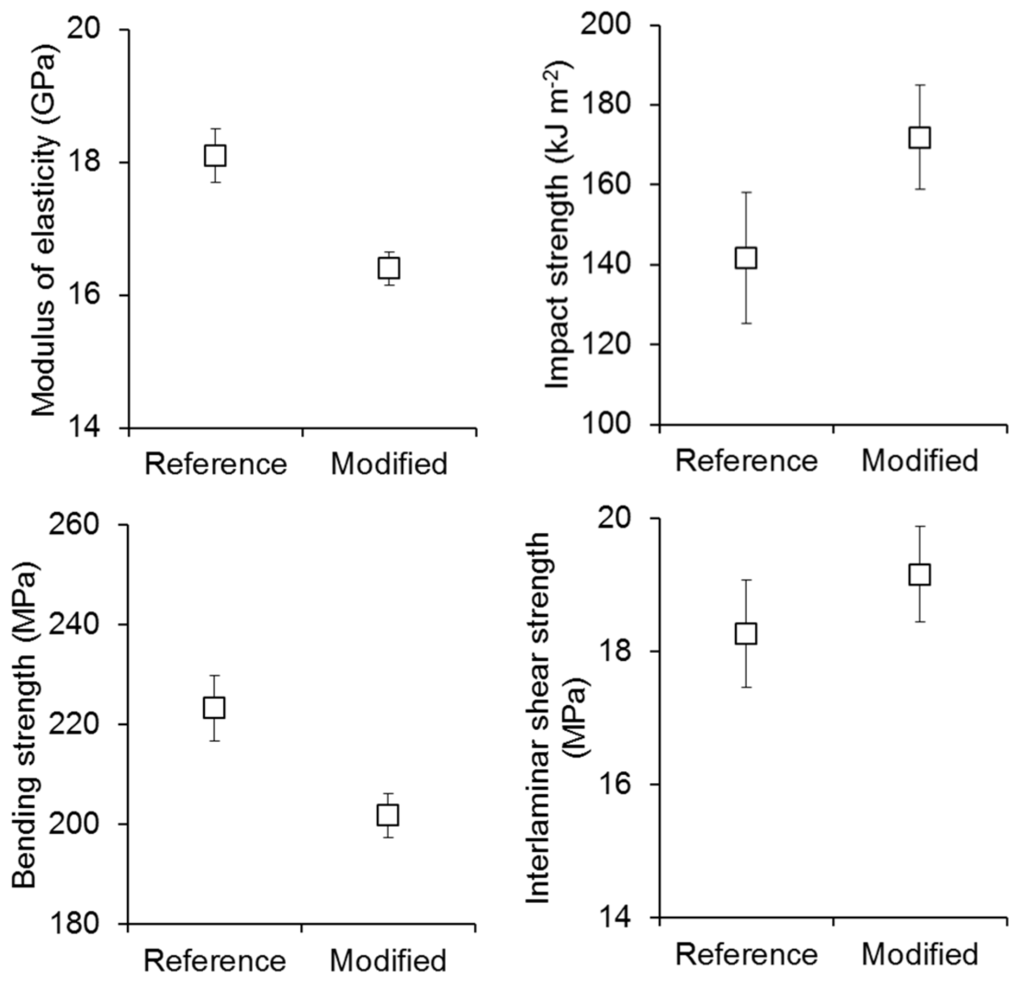