Atom Transfer Radical Polymerization (ATRP) is an important polymerization process in polymer synthesis. However, a typical ATRP system has some drawbacks. For example, it needs a large amount of transition metal catalyst, and it is difficult or expensive to remove the metal catalyst residue in products. In order to reduce the amount of catalyst and considering good biocompatibility and low toxicity of the iron catalyst, in this work, we developed a homogeneous polymerization system of initiators for continuous activator regeneration ATRP (ICAR ATRP) with just a ppm level of iron catalyst. Herein, we used oil-soluble iron (III) acetylacetonate (Fe(acac)3) as the organometallic catalyst, 1,1′-azobis (cyclohexanecarbonitrile) (ACHN) with longer half-life period as the thermal initiator, ethyl 2-bromophenylacetate (EBPA) as the initiator, triphenylphosphine (PPh3) as the ligand, toluene as the solvent and methyl methacrylate (MMA) as the model monomer. The factors related with the polymerization system, such as concentration of Fe(acac)3 and ACHN and polymerization kinetics, were investigated in detail at 90 °C. It was found that a polymer with an acceptable molecular weight distribution (Mw/Mn = 1.43 at 45.9% of monomer conversion) could be obtained even with 1 ppm of Fe(acac)3, making it needless to remove the residual metal in the resultant polymers, which makes such an ICAR ATRP process much more industrially attractive. The “living” features of this polymerization system were further confirmed by chain-extension experiment. View Full-Text
Keywords: ICAR ATRP; organometallic catalyst; Fe(acac)3 ICAR ATRP; organometallic catalyst; Fe(acac)3
►▼ Show Figures 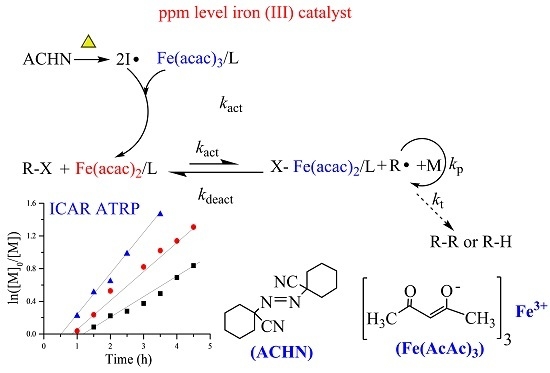