Functionalization, Compatibilization and Properties of Polyolefin Composites with Natural Fibers

Tri-n-Butylborane/WaterComplex-Mediated Copolymerization of Methyl Methacrylate with Proteinaceous Materials and Proteins: A Review

Previous studies of tri-n-butylborane–initiated graft copolymerization of methyl methacrylates with hydrated proteinous materials and proteins have focused on the number of grafted-poly (MMA) branches as well as the percent graft and graft efficiency. The number of branches in silk fibroin is 1.3, whereas the number in collagen, gelatin, ovalbumin and wool are 0.1, 0.04, 0.02 and 0.03, respectively. The number of grafted-PMMA branches in synthetic poly-L-peptides is approximately 10-fold less than that in gelatin, and decline, in the order poly-Ala > poly-Ser > poly-Pro > poly-Glu > poly-Lys. By contrast, poly-Gly, poly-Tyr and poly-Leu have no branches. The co-catalytic effect (the ratio of the number of polymer formed relative to that of control) of amino acids on tri-n-butylborane-initiated polymerization of MMA in the presence of water has been linearly correlated with their ionization potential (IPkoopman); |Äå HOMO (Highest Occupied Molecular Orbital)| (r2 = 0.6, outliers: Cys and His); Äå HOMO = [åHOMOaqua − åHOMOvacuum] calculated using the semiempirical AM1 method. Also, a significant exponential relationship between the number of branches of poly-L-polypeptides and the Äå HOMO of the corresponding amino acids has been observed (r2 = 0.9). A possible grafting site of protein (polypeptide) is discussed. View Full-Text
Keywords: tri-n-butylborane; graft copolymerization; MMA; water; poly-L-peptides; collagen; gelatin; silk fibroin tri-n-butylborane; graft copolymerization; MMA; water; poly-L-peptides; collagen; gelatin; silk fibroin
►▼ Show Figures 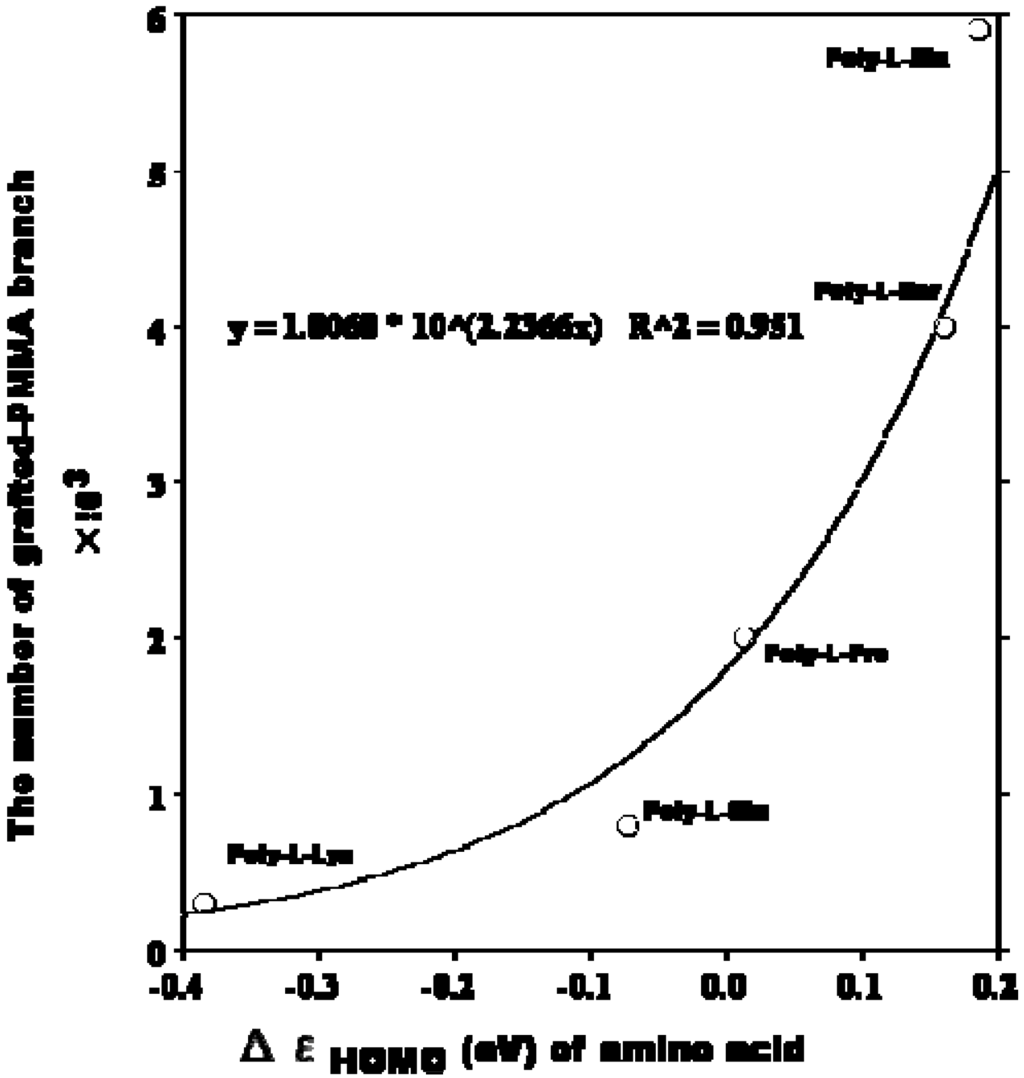