Mikto-Arm Stars as Soft-Patchy Particles: From Building Blocks to Mesoscopic Structures
Next Article in Special Issue

:
Novel versatile hydrogels were designed and composited based on covalent bond and noncovalent bond self-assembly of poly(methacrylic acid) (PMAA) networks and nanohybrids doped with graphene oxide (GO). The structures and properties of the neat PMAA and the prepared PMAA/GO hydrogels were characterized and analyzed in detail, using X-ray diffraction (XRD), scanning electron microscopy (SEM), Fourier transform infrared (FTIR) spectroscopy, swelling and cationic absorption, etc. The swelling results showed that the water penetration follows the non-Fick transport mechanism based on swelling kinetics and diffusion theory. The swelling capacity of PMAA and composited PMAA/GO hydrogels toward pH, Na+, Ga2+, and Fe3+ was investigated; the swelling ratio was tunable between 4.44 and 36.44. Taking methylene blue as an example, the adsorption capacity of PMAA/GO hydrogels was studied. Nanohybrid doped GO not only self-associated with PMAA via noncovalent bonding interactions and had a tunable swelling ratio, but also interacted with water molecules via electrostatic repulsion, offering a pH response of both the network and dye absorption. Increases in pH caused a rise in equilibrium swelling ratios and reduced the cumulative cationic dye removal.
Keywords:
nanohybrid hydrogel; ion and pH response; cationic dyes adsorbent 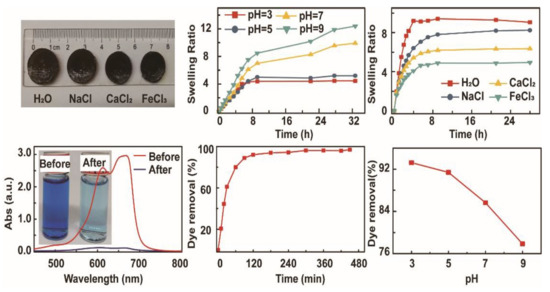 Hydrogels, either chemically or physically crosslinked, are mostly spontaneously formed as they capture water within their structure, having excellent and unique characteristics such as high hydrophilicity, elastic structure, and smart stimulus response, suitable for biomedicine [1,2], artificial muscles [3], robot actuators [4,5], adsorbents of toxic chemicals and wastewater [6,7], and drug delivery [8,9,10,11] applications. Their characteristics are dependent on changes in the external environment, such as pH, ionic strength, electrical stimulation [12], and temperature. The advantages of physical hydrogels over chemical hydrogels are that they form a crosslinked structure by associative forces capable of forming noncovalent crosslinks, and do not require any crosslinking agents. With physical crosslinking, the polymer chains are held by entanglements or by some physical interactions, such as hydrogen bonding [13,14] and ionic interactions [15,16,17]. However, industrial waters and natural waters are often contaminated by toxic or carcinogenic impurities, causing ecological disequilibrium and severe public health problems [18]. Despite the considerable advances in the field of water treatment [19,20], until now, less research has been conducted on the elimination of organic pollutants such as cationic dyes. Recently, attention has been paid to producing pollutant adsorbents from acrylic polymers [21] such as methacrylic acid due to their advantages: abundance, mild reaction conditions, and being biodegradable in nature [22]. Wu et al. synthesized vitamin C (VC)-modified reduced graphene oxide hydrogel (V-RGOH) using a green and facile self-assembly process with the assistance of biocompatible VC molecules for high-performance NH3 and NO2 [23]. Alammar et al. engineered nanocomposite hydrogels based on sustainable cellulose acetate for water treatment [24]. Cao et al. applied the open framework structure Na3V2(PO4)3@C as a novel faradaic electrode in the hybrid capacitive deionization (HCDI) system, and its outstanding performance demonstrated its promise as a material for desalination [25].
Graphene oxide (GO), which is prepared by chemical oxidation of natural graphite, is a precious nanomaterial used for many applications, such as for medical [26], energy storage [27], flexible sensor [28], and wastewater treatment [29] purposes, due to the abundant oxidic groups on its surface and its excellent specific surface area [30]. GO can be evenly dispersed into an aqueous phase to form strong interactions with polymers [14,31], which can accelerate the gelation of organic pollutant solutions. Sarkar et al. synthesized a new graphene oxide-based two-dimensional (2D) crosslinker (GOBC), and exploited the functionality of this crosslinker for the enhancement of toughness and stretchability of a poly(acrylic acid) (PAA) hydrogel [32]. This hydrogel will be used for cutting-edge applications in biomedical engineering. Ren et al. reported the facile preparation of a 3D regenerated cellulose/graphene oxide composite [33]. Alammar et al. developed polybenzimidazole (PBI), graphene oxide (GO), and reduced GO (rGO) nanocomposite membranes by the common blade coating and phase inversion technique, which can be used for the treatment of water produced by the oil and gas industry. This nanocomposite membrane exhibits the expected long-term performance (up to 180 days), and excellent reusability [34]. Zhang et al. developed a simple and green in situ assembly and reduction approach that can be used for the fabrication of reduced graphene oxide-supported palladium nanoparticles (Pd/rGO). The material was reported to have excellent catalytic performance and reusability (at least six times) [35]. Mikhaylov et al. proposed a green synthesis method, combined with graphene oxide reduced by tin disulfide, to obtain a highly stable sodium-ion battery anode [36].
In this context, the aim of our study was to prepare a cationic dyes absorbent. We carefully constructed a synthetic scheme, and a novel nanohybrid hydrogel was designed and developed in which a self-assembly approach was introduced by the hydrogen-bonding association of GO with covalently linked PMAA hydrogels. We discussed the swelling capacity of PMAA and PMAA/GO hydrogels toward pH, Na+, Ga2+, and Fe3+. The adsorption capacity of PMAA/GO hydrogels to methylene blue dye was investigated. The removal rate was as high as 96.92%. Increasing pH values resulted in increasing equilibrium swelling ratios, and in cumulative removal being reduced from 93.24% to 77.85%.

The modified Hummers method [37,38] was used to prepare GO. First, 1 g high-purity scaly graphite with 30 mL concentrated sulfuric acid, 0.8 g KPS, and 0.8 g P2O5 were mixed and reacted at 80 °C for 4 h and stirred in a round-bottom flask. After the reaction mixture was cooled to room temperature, it was diluted with 1 L ultrapure water to obtain a black mixture, and then the mixture was left to stand overnight. We filtered the overnight mixed solution, using the ultrapure water to remove the residual acid, and then dried the reactant overnight at 60 °C. The product was dispersed in 40 mL concentrated sulfuric acid at 0 °C again, and 5 g KMnO4 was slowly added to the mixture under an ice bath, mixed, and stirred for 2 h at 35 °C. The final mixed solution turned grass green. We slowly added 83.4 mL ultrapure water to dilute the mixed solution, continued to stir the solution for 2 h, and then added 234 mL ultrapure water and 6.7 mL 30 wt% hydrogen peroxide slowly and sequentially. The color of the mixed solution turned bright yellow. The mixed solution was dialyzed to neutral, then centrifuged and freeze-dried to obtain GO, which was stored in a dry environment until use.

In situ synthesis was used to prepare the PMAA/GO hydrogel. We weighed MAA to obtain a 3 mol/L aqueous solution, and a certain amount of GO was dissolved in ultrapure water to obtain a 4 mg/mL GO dispersion, which was then mixed with 2 mL MAA (3 mol/L), 2 mL ultrapure water, and MBA uniformly, in which the MBA/MAA molar ratios were 0.25, 0.5, 1, 2, 3, and 4 mol%. Then, we added the initiator KPS, in which the KPS/(MAA + MBAM) molar ratios were 0.5, 1, 2, 3, and 4 mol%. Finally, the solution was reacted at 70 °C for 12 h. For the synthesis of GO composite hydrogel, we ensured that the molar ratio of KPS/(MBAM + MAA) was 1 mol%, and the other amounts remained unchanged. We replaced the ultrapure water with 2 mL of 4 mg/mL GO dispersion.

In this study, the hydrogel was freeze-dried and fractured with liquid nitrogen, and then the fractured surface was sprayed with gold to obtain an SEM sample. Next, an EVO18 analytical scanning electron microscope (SEM, Zeiss, Germany) was used to characterize the appearance of the hydrogel. We used a UV-2700 UV–vis spectrophotometer (Shimadzu, Japan) to determine the absorbance of the MB solution, a Nicolet IS10 infrared spectrometer to analyze the components of the sample, and a BRUKER D8 ADVANCE X-ray powder diffractometer to analyze whether the composite hydrogel was successfully composited.

The hydrogel samples were naturally dried at room temperature. Then, the samples were weighed and immersed in deionized water under ambient conditions. Afterward, the sample was removed at regular intervals, the surface water was wiped off with filter paper, and the sample was weighed. We estimated the swelling rate of the sample according to [39]: where Wt is the weight of the samples after swelling at a certain point and Wd is the weight of the dried sample. The WA values of samples in the NaCl, CaCl2, and FeCl3 saline solutions (1 mM) were analyzed. At room temperature, the swelling rates at different pH values (3.0, 5.0, 7.0, and 9.0) were tested.

In this study, GO nanomaterials were introduced based on the PMAA hydrogel system, and PMAA/GO composite hydrogels that can adsorb the cationic dye methylene blue (MB) were obtained. The composite hydrogel was characterized by SEM, FTIR, and XRD, and the results showed that a PMAA/GO composite hydrogel was successfully produced. The swelling performance of the composite hydrogel was studied under different pH values and different salt ion solutions. The results showed that its water absorption increases with increasing pH values (from 4.44 at pH 3 to 12.4 at pH 9) and decreases with the increasing valence state from 8.24 to 4.95. In addition, taking methylene blue (MB) dye as an example, the effects of adsorbent quality, pH, and adsorption time on adsorption performance were studied, and the adsorption kinetics were analyzed. The results showed that the adsorption capacity for cationic dye MB can reach 119.01 mg/g, and the removal rate can reach 96.92%. Therefore, this work contributes to the development of new cationic adsorbents with dye removal performance, and has potential applications in the field of water treatment.

We are grateful for the test platform provided by the Analytical and Testing Center of Chongqing University.

We declare that we have no financial or personal relationships with other people or organizations that can inappropriately influence our work. 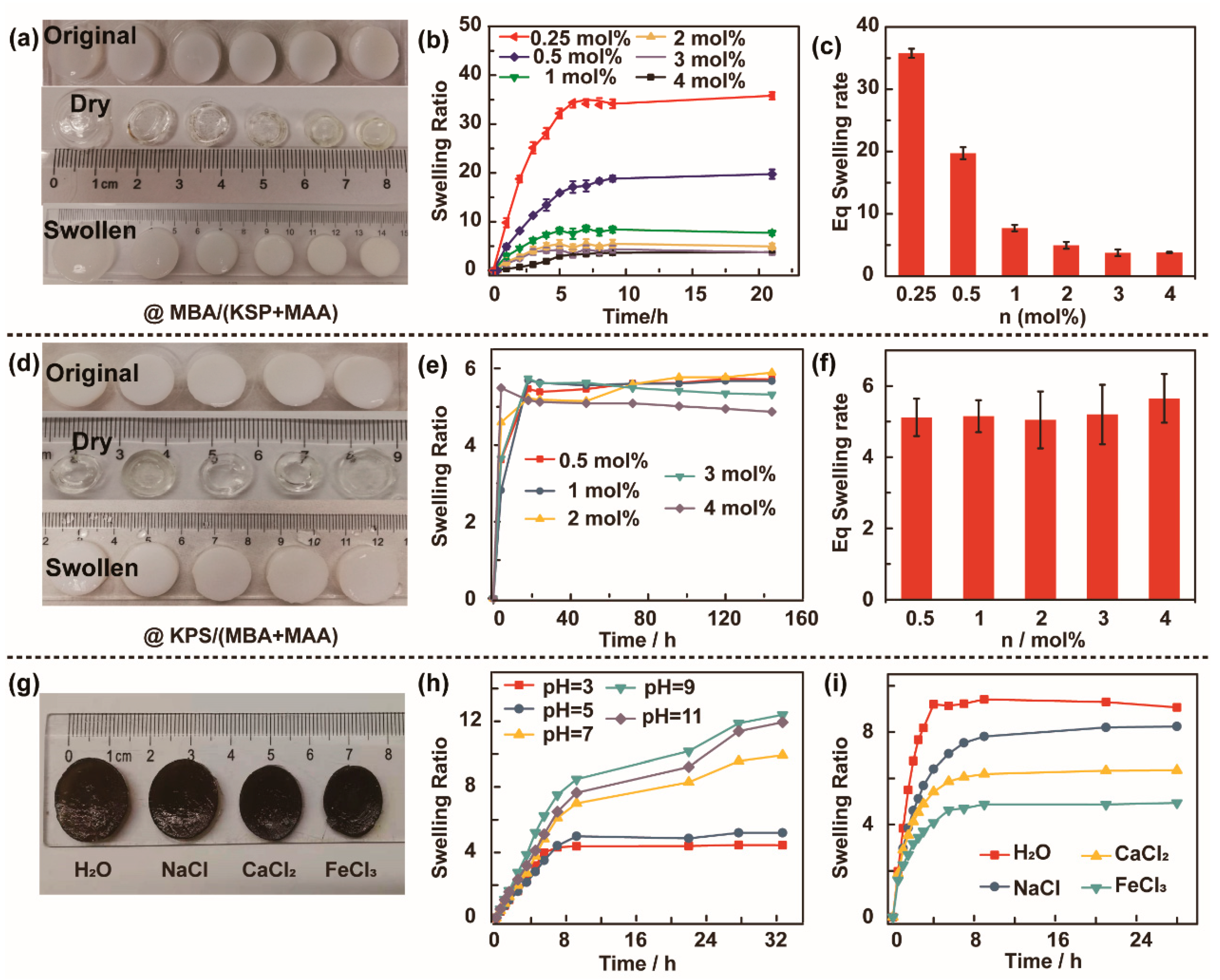