Adhesion Improvement between PE and PA in Multilayer Rotational Molding

The aim of this study is to investigate a multilayer structure made of polyethylene and polyamide by rotational molding. Due to the different polarity of these polymers, it is difficult to ensure enough adhesion between created layers. Two methods leading to improve adhesion are introduced. Plasma modification of polyethylene powder, after which new functional groups are bound to the treated surface, may enhance specific adhesion by forming hydrogen bonds with-CONH groups of polyamide. Different strategies of adding material to the mold give rise to complicated interlayer which increases joint strength by mechanism of the mechanical adhesion. Mechanical tests show a significant improvement of joint strength, where treated samples reached two-fold values of peel strength (7.657 ± 1.024 N∙mm−1) against the untreated sample (3.662 ± 0.430 N∙mm−1). During bending test, delamination occurred only in samples that were made of the untreated polyethylene. Adding polyamide during the melting stage of polyethylene powder in rotomolding resulted in the formation of entanglements which improve the peel strength almost eight times in comparison with the sample where the polyethylene was left to completely melt and create smooth interlayer surface.
Keywords: multilayer rotational molding; adhesion; plasma treatment; polyethylene; polyamide multilayer rotational molding; adhesion; plasma treatment; polyethylene; polyamide

Two types of rotational molding polymer powders were used in this study. The commercially available linear low-density polyethylene Dowlex™ 2629.10UE (PE) from Dow Chemical Company and the polyamide 11 Rilsan® Roto 11 (PA) from Arkema company. The Figure 1 shows the micrographs of the used powders. The particles have an elongated and rounded shape with a relatively low aspect ratio. No tails, whose presence leads to high void content within the part wall, are visible. Some polymer properties provided by the producers are summarized in Table 1.
The plasma modification of polyethylene powder (TPE) was performed with an industrial scaled device LA 650 by Surface Treat, a.s., Turnov, Czech Republic. The plasma was generated by two microwave power sources with a total power up to 2 kW operating in a pulsed regime. The working atmosphere consisted of atmospheric air with a gas flow of 600 sccm. The treatment time was 9 min.
The thermal behavior of the used materials was analyzed by differential scanning calorimetry (Netzsch STA 409PG LUXX). The results showed that plasma modification did not affect the thermal properties of PE powder. The melting temperature of both untreated and treated PE was 127.5 °C, the enthalpy of fusion of untreated PE was 91.8 J∙g−1, plasma modified PE had the enthalpy of fusion 93.4 J∙g−1. Based on this result it can be assumed that untreated and treated PE will behave equally during the heating in the rotomolding process. PA 11 had a melting temperature of 187.6 °C and enthalpy of fusion 42.1 J∙g−1.

2.2. Description of the Rotomolding Machine

The “rock and roll” type laboratory test machine (Figure 2a) was used for preparation of the specimen. The motion of the oven, and therefore also the mold, is ensured by two stepper motors. The first one, which is located at the front of the machine (1), provided rotation of the mold inside the oven. Its swinging is enabled by a belt drive connected to a second electric motor (2). The oven is heated by four electric resistance heaters placed at the bottom (3). Cooling is performed by a fan located underneath the oven. The temperature is measured by two sensors; the first one is in the oven (4) and the second one in the mold (5). The temperature sensor in the oven is fixed, while the temperature sensor in the mold can be pulled out of the working space. Through this gap, the next layers of material can be sequentially added to the mold during the process.

The specimens were prepared in a cube-shaped aluminum form. The internal dimensions of the mold and the external dimensions of the molded specimen, respectively, are 96 × 96 × 160 mm. The temperature inside the oven was set at 250 °C. The peak internal air temperature (PIAT) was 210 °C concerning results of the differential scanning calorimetry (DSC) analysis and the experience from the article [37]. At the higher temperatures, a significant degradation of the polyamide surface occurred. Figure 2b shows the thermograph plotted during the rotational molding. When the heating cycle starts, the temperature of the air in the oven (Toven) increases steadily towards the set temperature. In response to the increasing oven temperature, the temperature of the air inside the mold (Tmold) also increases. This lower curve enabled the estimate of moment at which it would be appropriate to add another layer of the material. In this study, the next layer was added during or after melting of the first PE layer. The melting stage can be identified when a visible plateau appears on the thermograph due to absorbing most of the heat input from the oven which is used for melting of the polymer particles. After this stage, the whole volume of the powder batch adheres to the mold and the majority amount of the particles are completely melted. At this point, thermal energy is directly put into to the mold again. Tmold has a similar rate as before melting stage and increases continuously. When the PIAT is reached, the cooling stage begins and Toven, and subsequently Tmold start to decrease. During cooling, solidification and crystallization occur. The process cycle is completed, when Tmold reaches 100 °C.
Two types of specimens were evaluated, specifically two-layer and three-layer. The prepared specimens were tested for peeling and with a three-point bend test. Samples with different thicknesses are suitable for these tests; therefore, samples intended for peeling or bending were molded from different amounts of material, as will be described below.

The effect of the plasma treatment and various preparation strategies were characterized by the mechanical tests and the methods of optical microscopy. The joint strength of the layers was evaluated by the peeling test, according to the modified standard ISO 11339:2010. Due to the size of the mold used, the dimensions of the test specimens had to be changed in comparison with this standard. Thus, they were cut to a length of 140 mm and a width of 20 mm. After that, the layers were separated from each other by a cross section through the center of the specimen wall to a distance of 25 mm. The specimens were clamped in the grips of the testing machine by these unbonded ends. According to the standard, a less flexible polyamide layer was attached to the movable grip. The measurement was performed on the universal testing machine MTS Exceed E42. The separation rate was set to 100 mm∙min−1. The peel strength (P.S.) was evaluated as the average value of force from the working diagrams by the MTS TestSuite software. Ten specimens were tested for each series.
The peel test was suitable for evaluating and quantifying adhesion between layers. However, the real components will not be stressed in this way. For this reason, a three-point bending test was performed according to ISO 178:2019. A specimen with a thickness of 5 mm was made from 300 g of raw material. The test specimens were cut to a width of 15 mm and a length of 110 mm. The flexural properties were measured by MTS Exceed E42. The distance between the supports was set to 80 mm, the test speed was 100 mm∙min−1. The measurement was performed by placing of the specimens on the supports with a polyamide side; the polyethylene layer was in contact with the loading edge. The flexural strength was calculated according to the equation:
σfm = (3 Fm L)/(2 b h2),
where Fm is the maximum force detected during loading; L is the span of the supports; the width—b and the thickness—h of the specimen. The mean value was determined from five measurements. Furthermore, it was reported whether delamination of the layers occurred or not.
The fracture surfaces after the T-peel test were optically analyzed with the digital microscope Olympus DSX1000. Some roughness parameters, namely arithmetical mean deviation of the roughness profile (Ra), mean height of the profile elements (Rc) and maximum height of the profile (Rz) were inspected on stitched images of the total surface area of 8 mm2 with inbuilt software. The formed interlayer was observed on 10-µm thin microtomed cross sections by polarizing microscope Nikon Eclipse ME600.

A new method for production of two-layer PE/PA system using rotational molding technology is presented. The system is based on the application of plasma-treated polyethylene powder for sintering the first polyethylene layer. Polar hydroxyl groups formed on the surface of the sintered TPE layer form an additional adhesion mechanism, probably based on hydrogen bonding with amide groups of the subsequent polyamide layer and improve specific adhesion between these polymers. Adding the second layer during heating and melting of the first layer leads to the creation of a more-structured interface between the outer TPE layer and inner PA layer. In this case, the joint strength was additionally improved by the combination of chemical bonding and mechanical anchoring.

This research was supported by the MPO of the Czech Republic, project No. FV40315 and partially by the ESIF, EU Operational Programme Research, Development and Education, and from the Center of Advanced Aerospace Technology (CZ.02.1.01/0.0/0.0/16_019/0000826), Faculty of Mechanical Engineering, Czech Technical University in Prague. 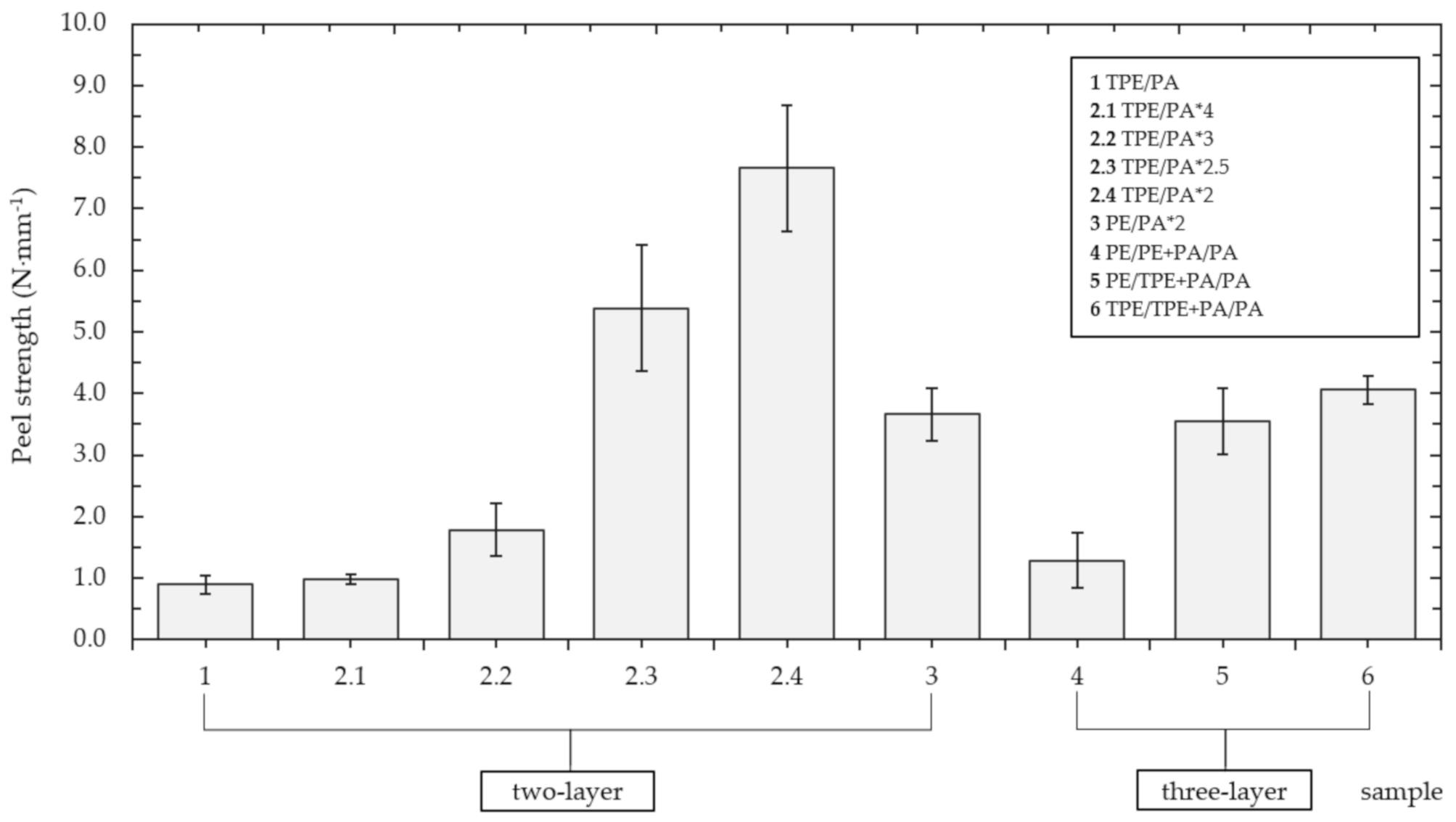 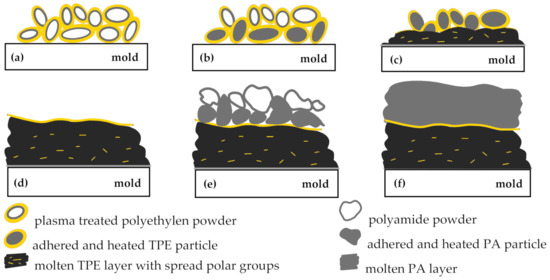