:
One of the major challenges currently in the field of material science is finding natural alternatives to the high-performing plastics developed in the last century. Consumers trust synthetic products for their excellent properties, but they are becoming aware of their impact on the planet. One of the most attractive precursors for natural polymers is tannin extracts and in particular condensed tannins. Quebracho (Schinopsis balansae) extract is one of the few industrially available flavonoids and can be exploited as a building block for thermoset resins due to its phenol-like reactivity. The aim of this study was to systematically investigate different hardeners and evaluate the water resistance, thermal behavior, and chemical structure of the quebracho tannin-based polymers in order to understand their suitability as adhesives. It was observed that around 80% of the extract is resistant to leaching when 5% of formaldehyde or hexamine or 10% of glyoxal or furfural are added. Additionally, furfuryl alcohol guarantees high leaching resistance, but only at higher proportions (20%). The quebracho-based formulations showed specific thermal behavior during hardening and higher degradation resistance than the extract. Finally, these polymers undergo similar chemistry to those of mimosa, with exclusive reactivity of the A-ring of the flavonoid.
Keywords:
flavonoid; resin; bio-sourced; bioplastic; wood adhesives; polymerization

In a context of growing interest in sustainable products and a circular economy, the need for high-performing bio-based solutions is rising exponentially [1,2]. In particular, bioplastics are an attractive alternative, because they have the potential to combine the high performance we are used to having with a lower environmental impact compared to oil-based synthetic resins [3,4].
Among the main natural resources of particular interest as building blocks for thermosetting resins, condensed tannins are one of the most attractive alternatives due to their availability and their phenol-like chemistry [5,6]. These polyphenols are industrially extracted from mimosa (Acacia mearnsii) and quebracho (Schinopsis balansae) for several applications, especially in the leather tannery row [7,8], in oenology [9,10], as antitumor and anti-oncogenic activities in pharmaceutical and medical applications [11,12], for thermal valorization [13,14], and water remediation [15,16]. As previously mentioned, these extracts were proved to crosslink with several hardeners, exploiting their phenol-like chemistry. In the study of Pizzi et al., as well as in that of Yurtsever and Sengil, stable polymers were formed by the reaction between quebracho and formaldehyde [17,18]. This flavonoid substrate was also used for the preparation of wood preservatives and adhesives for bio-based composites in combination with hexamine [19,20,21]. Quebracho’s chemistry was also exploited for the preparation of insulating foams, where furfuryl alcohol was applied as comonomer [22,23]. Another attractive reaction of Quebracho flavonoids occurs with dimethyl carbonate and hexamine, where Thébault et al. were able to produce urethane without the use of isocyanate [24,25]. Further successful exploitation of quebracho was the blending with commercial phenol–formaldehyde (PF) resins [26]. Here, the role of the condensed tannin was useful not only in decreasing the synthetic part but also in enhancing the physical properties and containing the formaldehyde emissions of the resulting resin [27]. Despite the number of studies performed, a systematic assessment of the polymerization parameters has not yet been presented [28].
In our work, industrially available quebracho extracts are proposed as building blocks for thermoset resins. Several curing agents were selected: formaldehyde, hexamine, glyoxal, maleic anhydride, furfural, and furfuryl alcohol. The effects of pH and hardener concentration in the curing process were investigated, and the resulting polymers were characterized for their leaching resistance, thermomechanical (TMA), and thermal (TGA) behavior as well as for their chemical structure (FT-ATR and solid-state 13C-NMR). Therefore, this research provides an overview of the properties of quebracho tannin-based sustainable polymers and the most suitable conditions for their synthesis.

Quebracho tannin water solutions were prepared at 50% by weight under vigorous stirring. The pH of the homogeneous solution (pH = 6.7) was modified to 2, 4, 6, and 8 by adding 33% wt. solutions of sulfuric acid and sodium hydroxide. Subsequently, 5 g of the tannin solution was introduced into plastic test tubes and added to 1, 2.5, 5, 10, or 15% of hardener based on solid tannin. The test tubes were then tightly screwed and exposed to 100 ± 5 °C for 24 h to cure. The solid obtained was removed and ground with a mortar to obtain a fine powder that was stabilized over 24 h at room temperature. Table 1 summarizes the experimental design of this study.

The test consisted of keeping 1 g of dried tannin polymer powder in 50 mL of deionized water under magnetic stirring for 1 h. The solution was then filtered (paper filter 125 µm), and the leaching resistance was calculated by weighing the dried filtered material according to the following formula:

Thermomechanical analysis was carried out with a TMA/SDTA840 Mettler Toledo (Mettler Toledo, Columbus, OH, USA) instrument equipped with a three-point bending probe. The samples were prepared by applying about 20 mg of tannin-based formulations (before curing) between two beech wood plies (15 mm × 5 mm × 1.5 mm). A non-isothermal method was applied: a 10 °C/min heating rate was set, and a cycle of 0.1/0.5 N force was applied on the specimens, with each force cycle lasting 12 s (6 s/6 s).
Through the relationship between force and deflection, Young’s modulus MOE was calculated for each tested case. The equation used to calculate the modulus of elasticity is shown below: where L is length, b the width, and h the height of the samples. F is the force applied, and f the deflection due to the applied load.

An SDT 2960 Simultaneous DSC-TGA TA instrument (Waters—TA instruments, New Castle, DE, USA) was used to measure the thermogram of cured samples, applying a 10 °C/min heating rate from 30 °C up to 800 °C. The weight loss of the samples was recorded as a function of temperature. The tests were carried out under an N2-flow inert environment.

Solid-state NMR experiments of the tannin-cured and leached polymers (with 15% hardener) were performed on a Bruker AVANCE NEO 400 MHz NMR spectrometer (Bruker, Billerica, MA, USA) using a 4 mm CP-MAS probe. The sample spinning frequency was 15 kHz. The 1H-13C CP-MAS NMR experiments consisted of excitation of protons with a p/2 pulse of 3.5 ms, CP block of 2 ms, and signal acquisition with high-power proton decoupling. A total of ca. 2000 to 15,000 scans were accumulated with a repetition delay of 5 s. The chemical shifts were referenced externally using adamantine.

The same samples analyzed by 13C-NMR were analyzed with a Thermo Fisher Nicolet NEXUS B70 (Thermo Fisher Scientifics, Waltham, MA, USA) FT-IR instrument equipped with an ATR accessory with a diamond crystal. The spectra were acquired with 32 scans from 4500 to 600 cm−1, and the region between 1800 to 600 cm−1 was reported and discussed.

Quebracho tannin extract can be successfully polymerized with five hardeners: formaldehyde, hexamine, glyoxal, furfural, and furfuryl alcohol. The leaching resistance of these polymers reaches values of around 80%, suggesting that part of the extract does not take part in the curing process and can be removed easily. The hardeners used cured with different kinetics: hexamine and glyoxal cured quickly in a one-step process, and furfural cured more stepwise. The produced polymers show enhanced thermal resistance compared to the quebracho extract, because the networking facilitates the rearrangement during pyrolysis. The polymerization of the formulations was also spectroscopically proven. Quebracho polymers are connected exclusively through the A-ring with every hardener, and the crosslinking products are similar to those occurring with the mimosa extract. Evidence of structure tightening can be seen in both spectroscopies, including band broadening and a decrease in C-H bending vibrations. The quebracho tannin-based formulations developed in this study can be proposed as alternative thermosetting polymers to replace phenolic resins in adhesives, coatings, insulation materials, and other molded products of the construction sector.

The present study was financed by the PhD LERH program of the University of Padua—TESAF department.

The data of this study are guarded by authors.

The authors gratefully acknowledge the support of the project BIRD 2021 funds, TESAF department, University of Padua—Italy, as well as the CERIC-ERIC Consortium for access to solid state 13C-NMR experimental facilities. 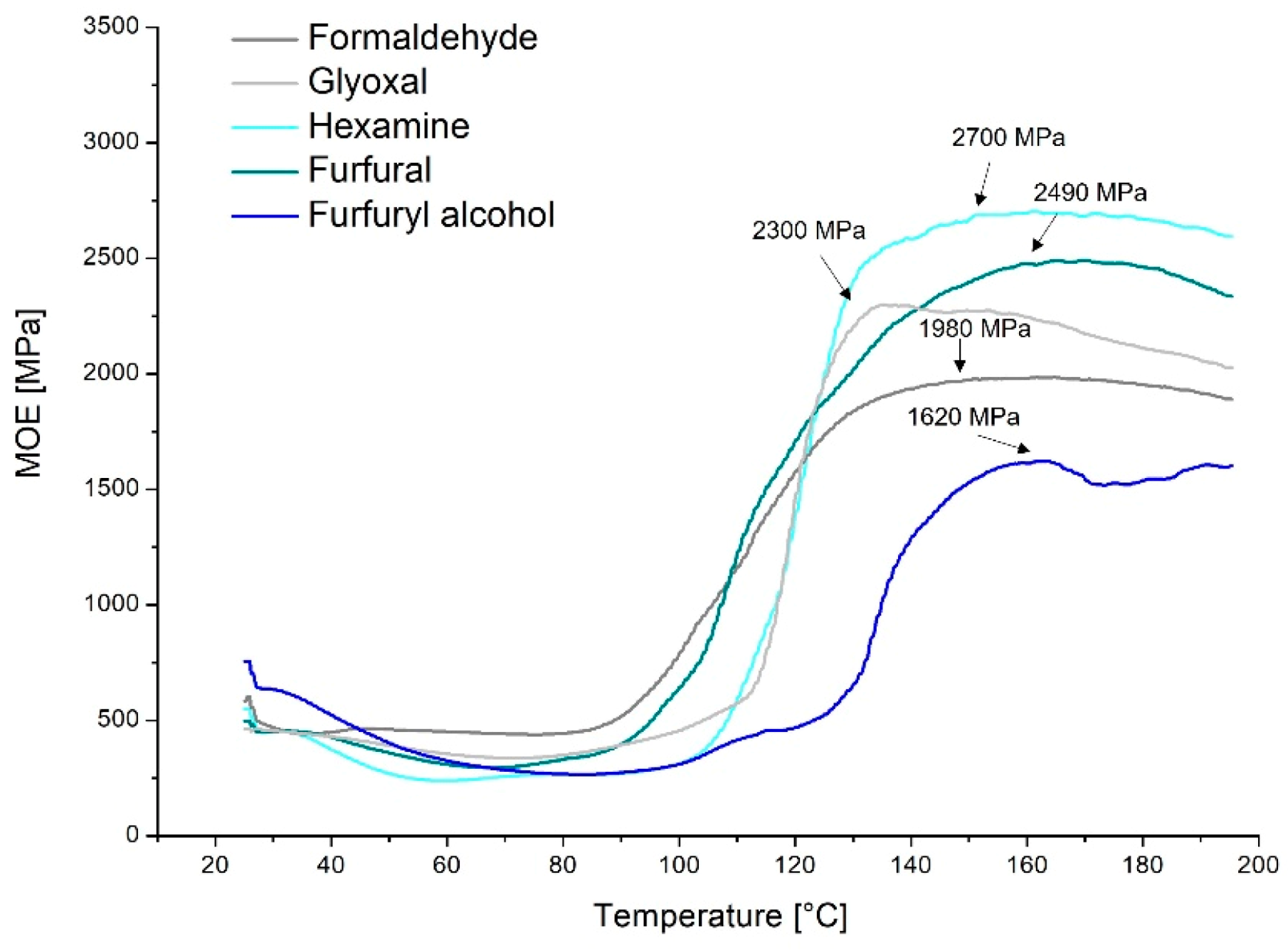 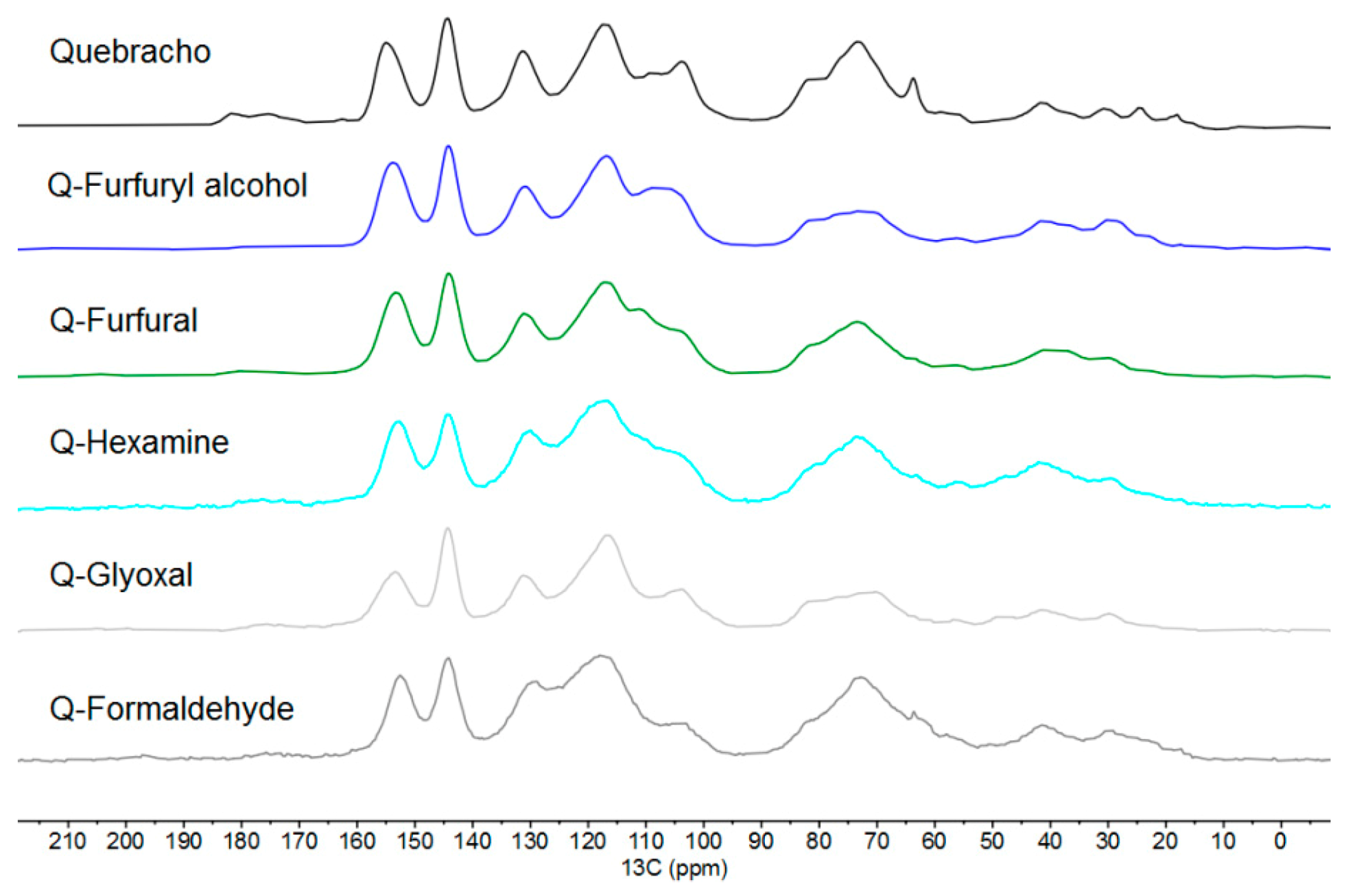 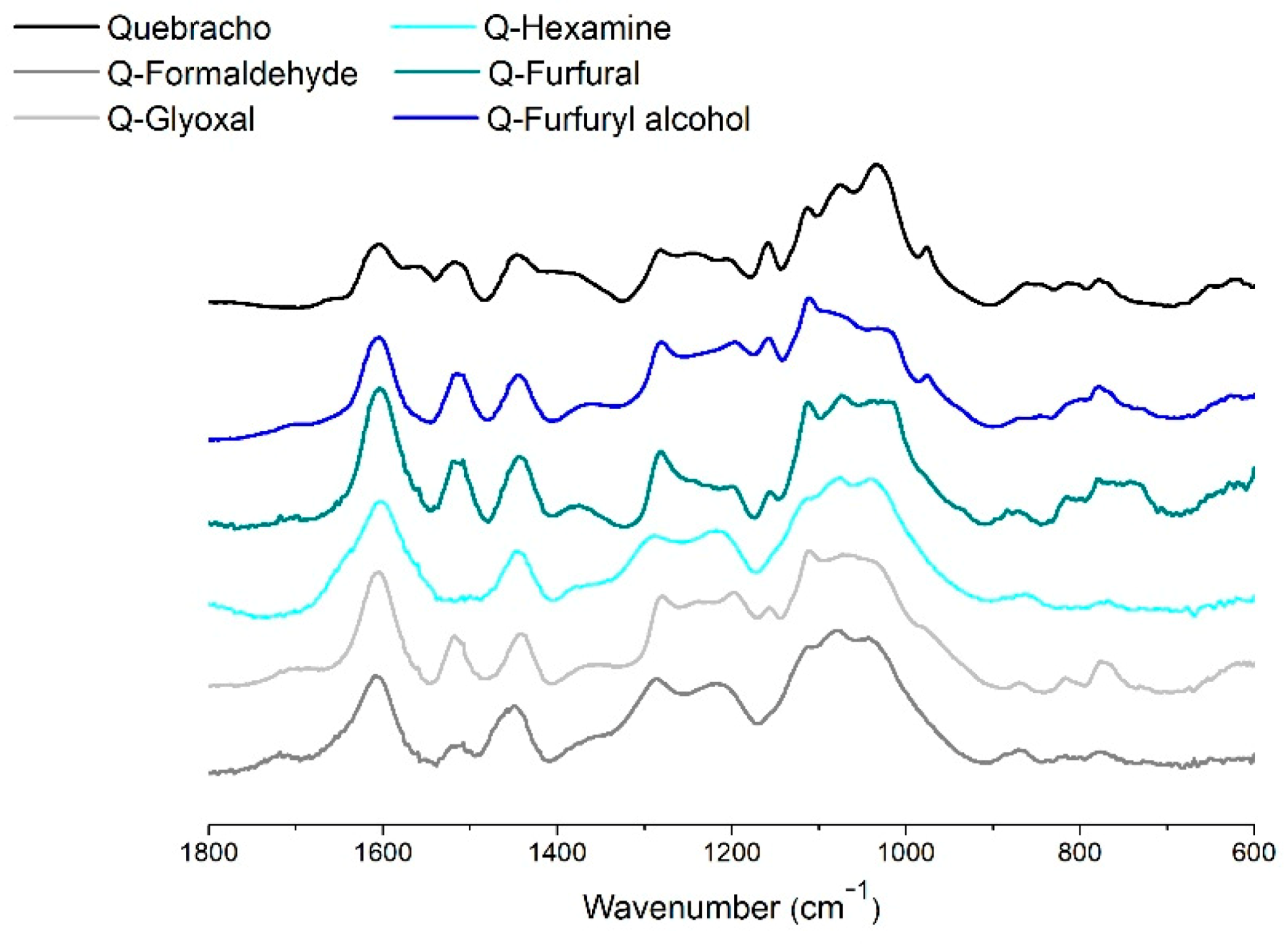