The study reports results of using a CO2-laser in continuous wave (3 W; 2 m/s) and quasi-pulsed (13.5 W; 1 m/s) modes to treat films prepared by solvent casting technique from four types of polyhydroxyalkanoates (PHAs), namely poly-3-hydroxybutyrate and three copolymers of 3-hydroxybutyrate: with 4-hydroxybutyrate, 3-hydroxyvalerate, and 3-hydroxyhexanoate (each second monomer constituting about 30 mol.%). The PHAs differed in their thermal and molecular weight properties and degree of crystallinity. Pristine films differed in porosity, hydrophilicity, and roughness parameters. The two modes of laser treatment altered these parameters and biocompatibility in diverse ways. Films of P(3HB) had water contact angle and surface energy of 92° and 30.8 mN/m, respectively, and average roughness of 144 nm. The water contact angle of copolymer films decreased to 80–56° and surface energy and roughness increased to 41–57 mN/m and 172–290 nm, respectively. Treatment in either mode resulted in different modifications of the films, depending on their composition and irradiation mode. Laser-treated P(3HB) films exhibited a decrease in water contact angle, which was more considerable after the treatment in the quasi-pulsed mode. Roughness parameters were changed by the treatment in both modes. Continuous wave line-by-line irradiation caused formation of sintered grooves on the film surface, which exhibited some change in water contact angle (76–80°) and reduced roughness parameters (to 40–45 mN/m) for most films. Treatment in the quasi-pulsed raster mode resulted in the formation of pits with no pronounced sintered regions on the film surface, a more considerably decreased water contact angle (to 67–76°), and increased roughness of most specimens. Colorimetric assay for assessing cell metabolic activity (MTT) in NIH 3T3 mouse fibroblast culture showed that the number of fibroblasts on the films treated in the continuous wave mode was somewhat lower; treatment in quasi-pulsed radiation mode caused an increase in the number of viable cells by a factor of 1.26 to 1.76, depending on PHA composition. This is an important result, offering an opportunity of targeted surface modification of PHA products aimed at preventing or facilitating cell attachment. View Full-Text
Keywords: P(3HB); copolymers; films; CO2 laser; SEM; AFM; water contact angles; MTT assay; NIH 3T3 fibroblasts P(3HB); copolymers; films; CO2 laser; SEM; AFM; water contact angles; MTT assay; NIH 3T3 fibroblasts
►▼ Show Figures 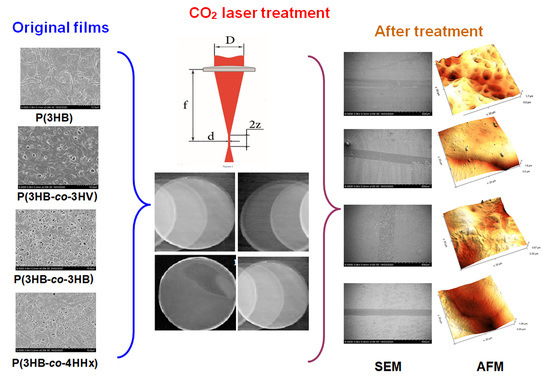