Impact of Ergothioneine, Hercynine, and Histidine on Oxidative Degradation of Hyaluronan and Wound Healing

A high-molecular weight hyaluronan is oxidatively degraded by Cu(II) ions and ascorbate—the so called Weissberger biogenic oxidative system—which is one of the most potent generators of reactive oxygen species, namely •OH radicals. Ergothioneine, hercynine, or histidine were loaded into chitosan/hyaluronan composite membranes to examine their effect on skin wound healing in ischemic rabbits. We also explored the ability of ergothioneine, hercynine, or histidine to inhibit hyaluronan degradation. Rotational viscometry showed that ergothioneine decreased the degree of hyaluronan radical degradation in a dose-dependent manner. While histidine was shown to be potent in scavenging •OH radicals, however, hercynine was ineffective. In vivo results showed that the addition of each investigated agent to chitosan/hyaluronan membranes contributed to a more potent treatment of ischemic skin wounds in rabbits compared to untreated animals and animals treated only with chitosan/hyaluronan membranes. View Full-Text
Keywords: free/•OH radicals; rotational viscometry; skin injuries; thiol compounds free/•OH radicals; rotational viscometry; skin injuries; thiol compounds
►▼ Show Figures 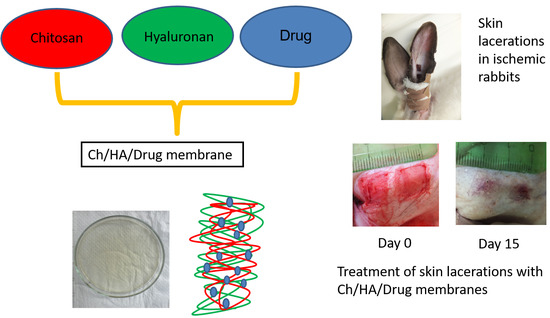 Maurice N. Collins
Dr Maurice N. Collins is a Senior lecturer at the School of Engineering and Principal Investigator at the Bernal Institute and the Health Research Institute, all at the University of Limerick. He is the Lead Principal investigator and coordinator of the H2020 funded LIBRE consortium (lignin for carbon fiber), the largest consortium in biobased carbon fibre research in Europe as well as being Co-PI on multiple national funded projects. His research interests include Tissue Engineering, hydrogels and biobased carbon fibre precursor materials as well as the development of 3D printable Polymers. Dr Collins has a strong track record in attracting research funding. His work has led to 2 licencing agreements and 6 patent applications. Coupled to this, he has authored >150 publications on Polymer Science related topics. He is a reviewer for several international Journals. He sits on the editorial board of Carbohydrate Polymers, Heylion and MDPI Materials. He is the editor of the international journal of biological macromolecules published by Elsevier. He was recently awarded the Bernal Institute senior researcher of the year award. His work to date has led to >3.5k citations with a current h -index of 33.
Zoom | Orient | As Lines | As Sticks | As Cartoon | As Surface | Previous Scene | Next Scene
We use cookies on our website to ensure you get the best experience. Read more about our cookies here.
Accept
We have just recently launched a new version of our website. Help us to further improve by taking part in this short 5 minute survey here. here.
Never show this again