Table 1 lists the chemical compositions of the materials used in the experiments. The chemical composition analysis of red clay and ordinary Portland cement (OPC) was performed by X-ray fluorescence (XRF) method. Samples were prepared in powder form and then subjected to pretreatment and measured using a Wavelength Dispersive X-ray Fluorescence spectrometer (Bruker Korea, Seongnam, Republic of Korea). After the red clay was allowed to dry naturally, it was sieved using a 2 mm sieve to ensure a uniform particle size. For the cement, OPC of type KS L 5201 (Asia cement, Seoul, Republic of Korea) was used. The density of the cement was 3.12 g/cm³, and the fineness was 3500 cm2/g.
The aqueous polymer solution was in the form of poly(AA-co-AM), in which the monomer acrylic acid (AA) and acrylamide (AM) were copolymerized. The intrinsic viscosity of the polymer aqueous solution was 2–3 dL/g.
Table 2 and Table 3 list the physical and chemical properties of the epoxy and hardener used in these experiments, respectively [17]. The epoxy (KEM-101-50, KUKDO CHEMICAL, Seoul, Republic of Korea), which is a solid epoxy resin created in liquid form, is a general quick-drying epoxy with a water-based coating. The hardener (KH-700, KUKDO CHEMICAL, Seoul, Republic of Korea), which contains a polyamine, is a general hardener with excellent water and chemical resistance, high gloss, and a water-based coating.

The experimental plan of this study is summarized in Table 4. A total of three formulation levels for the specimens were configured: RP (red clay + polymer aqueous solution), RPC (red clay + polymer aqueous solution + cement), and RPE (red clay + polymer aqueous solution + epoxy emulsion). During mixing, 5 wt% binder was added to the cement through internal replacement. For the polymer aqueous solution and epoxy emulsion, 8 wt% binder was added through external replacement considering the polymerization conditions and material viscosity. To ensure uniform consolidation, a universal testing machine was used to manufacture the specimen to a consolidation degree of 2 MPa. Curing was conducted at a constant temperature of 20 °C and relative humidity of 60%. In terms of the evaluation indices, the compressive strength and water loosening were measured to determine the curing properties. To investigate the deformation, the shrinkage and rate of mass change were measured. Microstructural analyses were performed using scanning electron microscopy (SEM, SEC, Suwon, Republic of Korea) and mercury intrusion porosimetry (MIP, Micromeritice, Norcross, GA, USA). Moreover, to investigate the curing properties of the red clay binder with varying temperature, the compressive strength under different curing conditions was measured.

A mortar mixer was used to mechanically mix the formulation with the red clay binder. First, the sample was weighed, poured into the mixer container, and dry mixed for 30 s. The additives were then added uniformly, and the sample was mixed for an additional 1 min. The binder that had become attached to the bottom and wall surfaces of the mixer container was then removed and collected in the center of the container, after which it was mixed again for 1 min. In the epoxy emulsion, to prevent agglomeration due to the viscosity of the epoxy and hardener, the epoxy and hardener were each weighed using a 20 mL laboratory syringe in a beaker in which the polymer aqueous solution had previously been weighed. The epoxy emulsion was then mixed for at least 1 min using a reagent spoon and added to a mortar mixer container.
To produce a specimen with a size of 50 mm × 50 mm × 50 mm, 240 g of the red clay binder was weighed. One-third of the weighed sample was then placed into each of three molds and consolidated to 2 MPa using a universal material tester to ensure uniform compaction. After reaching 2 MPa, the consolidation was maintained for 1 min to produce the specimen. The prepared specimens were cured at a constant temperature of 20 °C and relative humidity of 60%.

Shrinkage and Rate of Mass Change

Powder samples taken at 24 h of aging were coated with platinum, and the microstructure was observed at magnifications of ×3000 and ×5000 using a scanning electron microscope (SNE-3200M) at an acceleration voltage of 15 kV.

Powder samples collected at 24 h of aging were completely dried in a drying furnace at a temperature of 60 °C. Non-wetting mercury was then pressurized at 0–60,000 psi, and the total cumulative porosity and pore diameter of the samples were measured based on the amount of intrusion using a porosimeter (AutoPore IV 9520).

Figure 3 shows the compressive strength results for the red clay binder specimens. The compressive strength was measured at 3, 6, 12, and 24 h of aging. The compressive strength of the RPE (red clay + polymer aqueous solution + epoxy emulsion) specimens was substantially higher compared with that of the RP (red clay + polymer aqueous solution) and RPC (red clay + polymer aqueous solution + cement) specimens. This is attributed to the curing mechanisms of the epoxy and hardener in the epoxy emulsion. In the epoxy curing mechanism, the molecular structure of the epoxy group (C–O–C) has a triangular shape of primary bound amines. This then binds with a hydroxy group (–OH) to form the secondary amine form, which is a polymer chain. Owing to the increase in binding reactions, the size of the molecular bonds increases, and the viscosity increases as the epoxy cures [19,20,21,22]. Meanwhile, the hardener breaks the bond of the epoxy group (C–O–C) molecular structure, which is the primary amine form of the epoxy, resulting in the formation of two chains and an increase in the effectiveness of the epoxy [23,24].
The RPE specimen reached a compressive strength of 2.4 MPa within just 12 h of aging, which satisfies the requirement for earthen walls specified in the ACP-EEC rammed earth construction regulations at 28 d of curing [8]. This suggests that the epoxy emulsion can be applied as an additive for strength development at an early age, which is a requirement for materials used for autonomous rammed earth construction.

3.3. Shrinkage and Rate of Mass Change

Figure 6 shows SEM micrographs of the red clay binder specimens at 24 h of aging. The RP and RPC specimens (Figure 6a,b), which did not contain the epoxy emulsion, showed partially smooth surfaces. This is likely to be because the solid polymer content in the aqueous polymer solution effectively formed hydrogen bonds with the silica particles in the red clay as secondary bonds, causing the red clay binder to agglomerate.
On the other hand, the RPE specimen (Figure 6c), which contained epoxy emulsion, exhibited a wider and smoother plate-shaped surface than the other two specimen types at the same magnification. This is attributed to an increase in the effect of uniform red clay particle agglomeration, which is caused by the increase in molecular bonding of secondary amines through bonding with the hydroxyl group (–OH) in the primary amines of the epoxy, as well as the curing mechanism of the hardener that promotes this reaction. Notably, as the RPE sample achieved curing in a shorter time than the other two formulations, a wider and smoother plate shape overall was confirmed.

Figure 7 shows the MIP results for the red clay binder specimens at 24 h of aging, where Figure 7a,b depicts cumulative and incremental intrusion, respectively. The RPE specimens, which contained the epoxy emulsion, exhibited larger pore diameters than the other two formulations, although the total cumulative pore volume was smaller. In this regard, as noted in the SEM results, adding the epoxy emulsion caused a wider and smoother plate shape to form compared to the formulations without the epoxy emulsion. Although the total cumulative pore volume between the plate-shaped particles created as the red clay particles agglomerated is small, the gaps between the plate-shaped particles due to the wider plate shape increased, thus resulting in larger pore diameters in the RPE specimen than in the other two formulations.

This study evaluated the performance of a red clay binder with the addition of an epoxy emulsion by analyzing the compressive strength, water loosening, shrinkage, and microstructure of the red clay binder. The compressive strength characteristics were also evaluated under different curing conditions. In these evaluations, the formulation condition of the epoxy emulsion was varied. The following conclusions were obtained in this study. 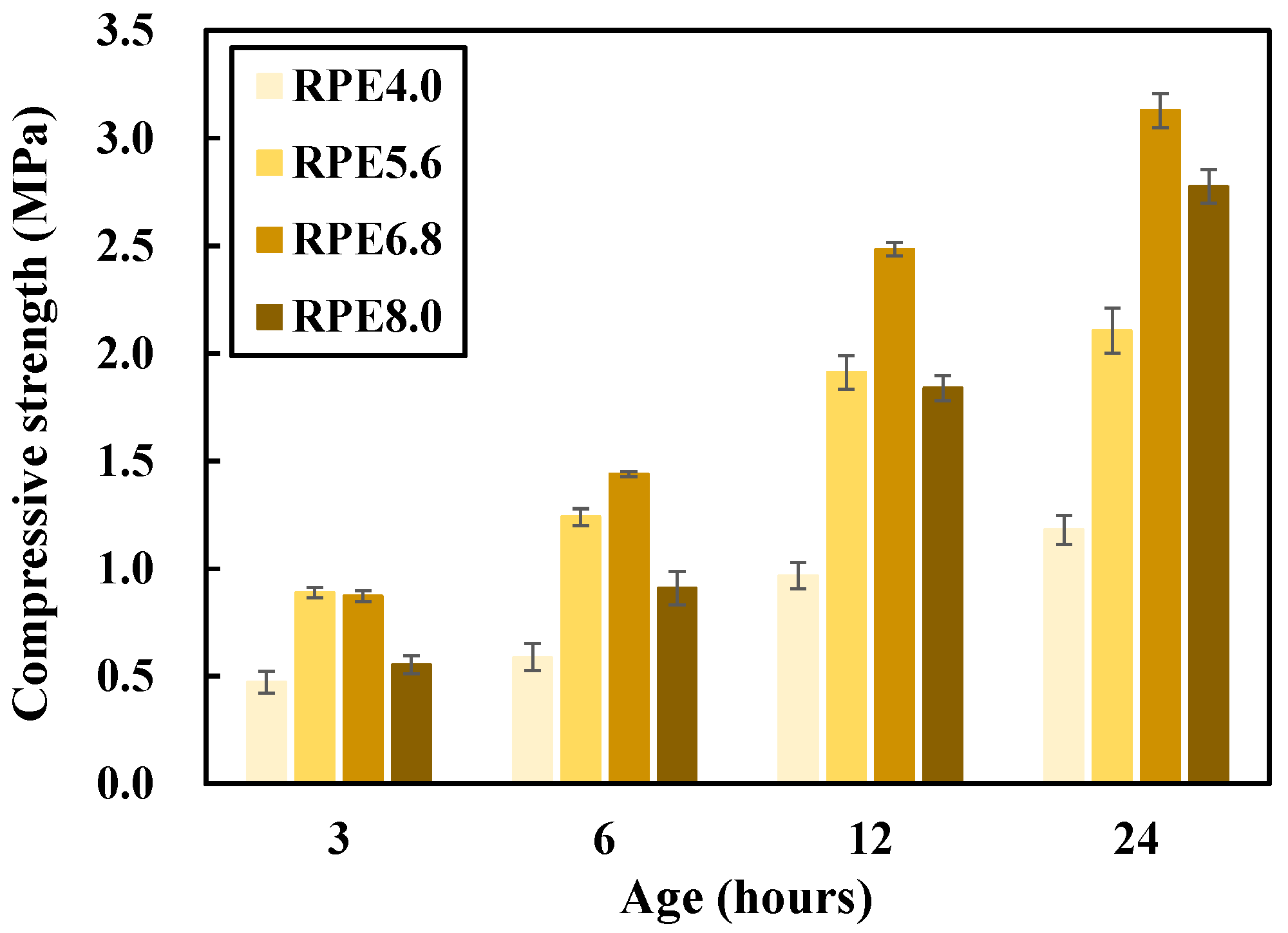 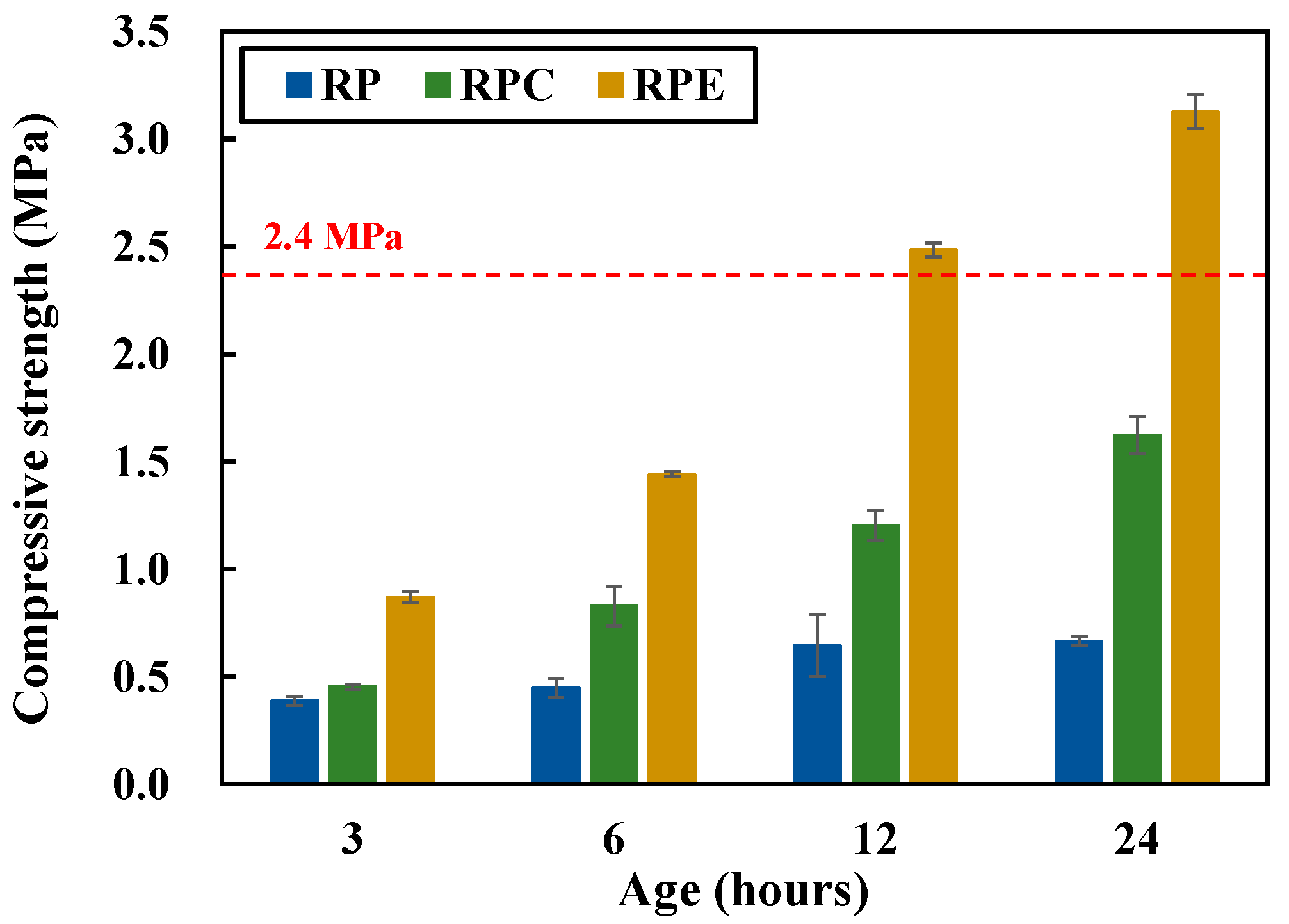 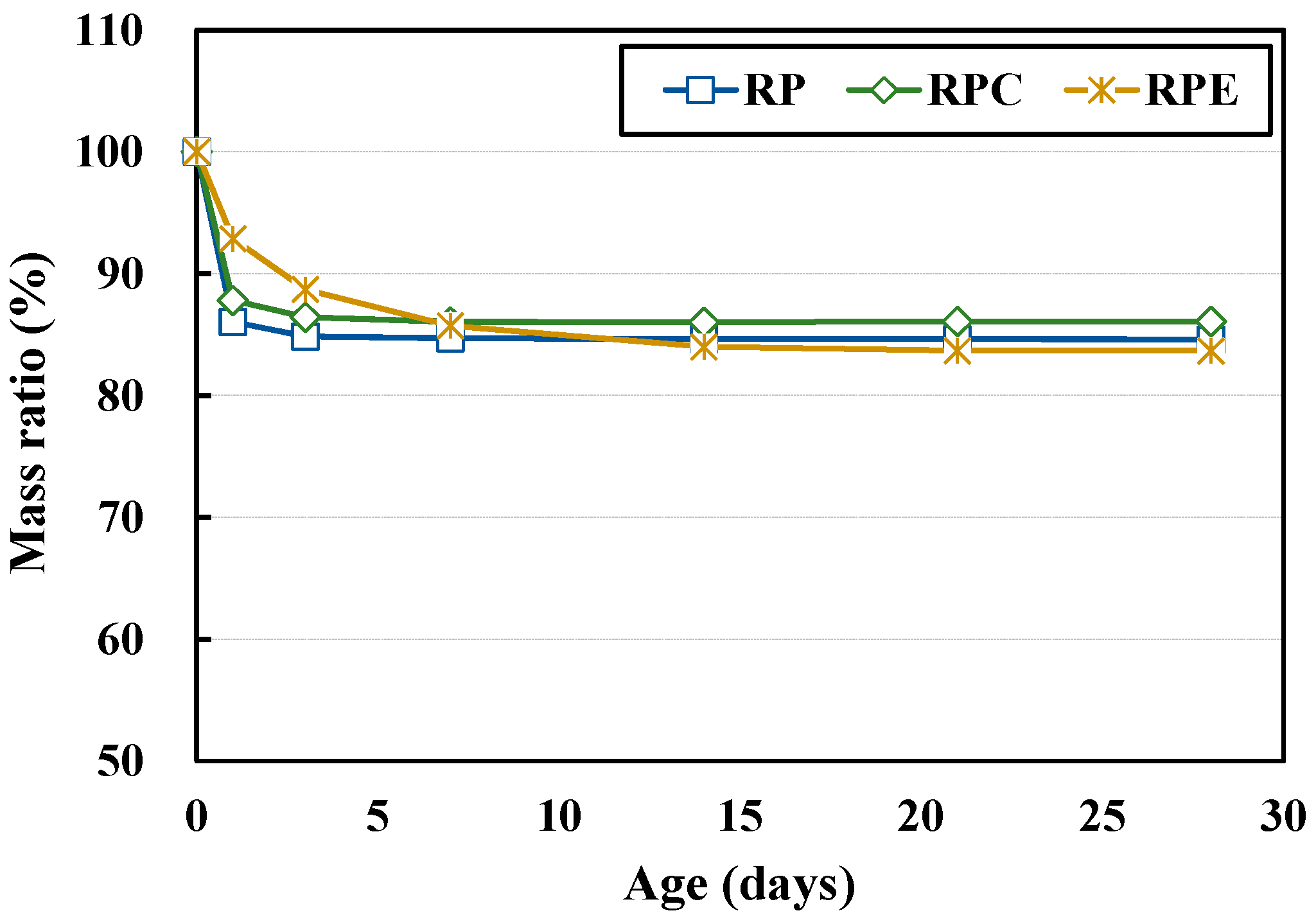