In recent years, solution-processible conjugated polymers have garnered a great deal of attention for the practical printing of organic field-effect transistors (OFETs), organic photovoltaics, and interface materials due to their low cost and large-area processability [1,2,3,4,5,6]. Typically, they have been utilized and studied as active materials for OFETs because of their semiconducting properties, arising from the extended π-conjugation of unhybridized Pz carbon orbitals along the backbone [7]. However, OFETs based on conjugated polymers commonly exhibit a low charge transport due to the low degree of intra- and intermolecular ordering (i.e., low crystallinity) in semiconductor films, resulting in significant limitations on their practical commercialization [8,9,10,11]. In general, semicrystalline polymer films are generated via solution processing of conjugated polymers; small crystallites are randomly distributed within a largely amorphous matrix [12,13]. This morphological feature is apt to involve grain boundaries and trap sites that prevent efficient charge hopping between crystalline domains [14,15].
To date, thermal annealing has been commonly used as a representative approach to increase the degree of crystallinity, and thus the charge carrier mobility, of conjugated polymer thin films for high performance OFETs. While this approach is quite effective, it leads to degradation of the favorable properties of the conjugated polymer itself and is somewhat limited in achieving a high degree of crystallinity [16,17]. Recently, an alternative approach, solvent vapor annealing (SVA), has been preferably used to improve the crystallinity and concomitant charge transport of conjugated polymer thin films because of its ease of use and outstanding effectiveness at room temperature [18,19]. In a typical process, solvent molecules penetrate into a conjugated polymer thin film at room temperature and increase the movement of polymer chains by their ability to serve as a plasticizer, resulting in increased crystallinity of resultant films [20,21,22].
More recently, conjugated polymer nanowires (NWs) that are preaggregated in solutions via a solution treatment, such as sonication or ultraviolet (UV) irradiation, have been incorporated into conjugated polymer films to enhance intra- and intermolecular interactions (i.e., crystallinity) of polymer chains [23,24]. In general, strong noncovalent π–π interactions between polymer chains lead to the nucleation and growth of one-dimensional (1-D) crystalline NWs. Accordingly, charge transport favorably occurs along the direction of the long axis of the NWs [25]. So far, several reports have demonstrated successful enhancement in molecular ordering and charge transport of a conjugated polymer thin film by the incorporation of the 1-D NWs of the corresponding polymer [9,26,27,28,29,30]. Post-solvent vapor annealing is envisioned to further enhance molecular ordering of NW-embedded conjugated polymer thin films commensurate with efficient charge transport. However, there are few reports that study the solvent vapor annealing of conjugated polymer films with the incorporation of preformed crystalline NWs [31,32,33,34].
Herein, we systematically study SVA of poly(3-hexylthiophene) (P3HT) thin films embedded with preformed crystalline P3HT NWs and demonstrate that SVA can improve the molecular ordering and concomitant charge transport properties of the resultant P3HT films, resulting in the additional formation of crystalline P3HT NWs within the corresponding films. It was discovered that 20 min of chloroform (CF) vapor annealing can result in a maximized charge carrier mobility of the P3HT-NW-embedded P3HT films, which is highly superior compared to those of pristine P3HT films with or without P3HT NWs. The influence of SVA on the molecular ordering, morphologies, and charge transport characteristics of the P3HT-NW-embedded P3HT films was investigated using UV–VIS absorption spectroscopy, atomic force microscopy (AFM), polarized optical microscopy (POM), and grazing incident X-ray diffraction (GIXRD), and charge carrier mobility measurements. Further, the correlation between the solvent-annealing parameters, molecular ordering, morphologies, and charge transport characteristics of the resultant films is elucidated.

Materials: Poly(3-hexylthiophene) with a regioregularity of 96% and a molecular weight of 51 kDa was purchased from Rieke Metals Inc. (Lincoln, NE, USA). Chloroform (anhydrous grade) was purchased from Sigma-Aldrich (Milwaukee, WI, USA). All chemicals were used without further purification.
Preparation of P3HT NWs in Solution: The P3HT solutions were prepared by mixing ten milligrams (10 mg) of P3HT into 2 mL of chloroform, followed by heating at 55 °C for 60 min for complete dissolution. To generate P3HT NWs in solution, the as-prepared P3HT solutions were treated by UV irradiation, following the procedure reported in previous literature [24].
OFET Fabrication and Solvent Vapor Annealing: The FET devices with bottom-gate bottom-contact geometries were manufactured by following the reported procedure [35]. All P3HT films were coated onto precleaned devices via spin-coating at a rate of 2000 rpm for 60 s in ambient condition. Subsequently, the as-prepared OFET devices were placed on a polytetrafluoroethylene (PTFE) platform (3 cm × 3 cm × 1 cm) in a sealed glass container (7 cm in diameter and 2 cm in height) filled with 12 mL CF, and then annealed with CF vapor for a specified time at room temperature. Finally, the as-annealed devices were placed in a vacuum chamber (1 Torr) overnight at 55 °C for the removal of the residual solvent.
Characterizations: A Keithly 4200 semiconductor analyzer (Keithley, Cleveland, OH, USA) was utilized to test the OFET devices in a N2 filled glovebox. The charge mobility was calculated in the saturation regime at a drain-source voltage (VDS) of −80 V and a gate-source voltage (VGS) of −80 V [21,22]. UV–VIS spectra of P3HT films were recorded by using a UV–VIS spectrometer (Optizen 2120, Mecasys, Daejeon, Korea). Polarized optical microscopy (POM) images were obtained using a LEICA DM 7500PT with an iCM 3.0 IMT i-Solution Inc. digital camera (i-Solution Inc., Seongnam, Korea). For UV–VIS and POM characterization, P3HT thin films were spin-coated on a precleaned glass substrate. Grazing incidence X-ray diffraction (GIXRD) data were collected using a PANalytical X’pert Pro system (Cu X-ray source operating at 45 kV and 40 mA, Malvern Panalytical, Malvern, United Kingdom). The grazing-incidence angle was fixed at 0.2° and the detector was scanned from 3 to 20°. The surface morphologies of P3HT films were measured by using an atomic force microscopy (XE-100, park systems, Suwon, Korea) operated in tapping mode with a silicone tip (OMCL-AC160TS, park systems, Suwon, Korea).

In conclusion, we investigated the effects of SVA on the molecular ordering, morphology, and charge transport properties of the P3HT films containing preformed P3HT NWs. SVA using CF vapor greatly facilitated the formation of crystalline P3HT nanofibrillar structures via strong π–π interactions between P3HT chains. In particular, the generation of crystalline P3HT NWs was more prominent in the P3HT films obtained from the solutions exposed to UV irradiation upon CF vapor annealing, probably due to the presence of nucleation sites and small crystallites, compared to pristine P3HT films. It was revealed that the annealing time profoundly influences the molecular ordering, morphology, and charge transport characteristics of P3HT films. As the annealing time was increased up to 20 min, increasingly, the degree of molecular ordering was enhanced and the generation of the P3HT NWs was promoted. As a result, the P3HT-NW-film CF vapor annealed for 20 min exhibited a mobility of ~10.2 × 10−2 cm2 V−1 s−1, which is 32% greater than that of the pristine P3HT-NW films (~7.8 × 10−2 cm2 V−1 s−1) and 340% greater than that of the pristine P3HT films (~2.3 × 10−2 cm2 V−1 s−1). The studies presented here provide new insights into post-deposition processes, such as solvent vapor annealing and thermal annealing, for the fabrication of low-cost flexible high performance organic electronic devices.

This work was financially supported by the National Research Foundation of Korea (NRF) grant by the Korea government (MSIT, Ministry of Science and ICT) (NRF-2017R1C1B1004605). This work was also supported by the Basic Science Research Capacity Enhancement Project through the Korea Basic Science Institute (National Research Facilities and Equipment Center) grant funded by the Ministry of Education.

The authors thank the center for Research Facilities at the Chonnam National University for their assistance in the analysis of the samples using AFM and XRD. 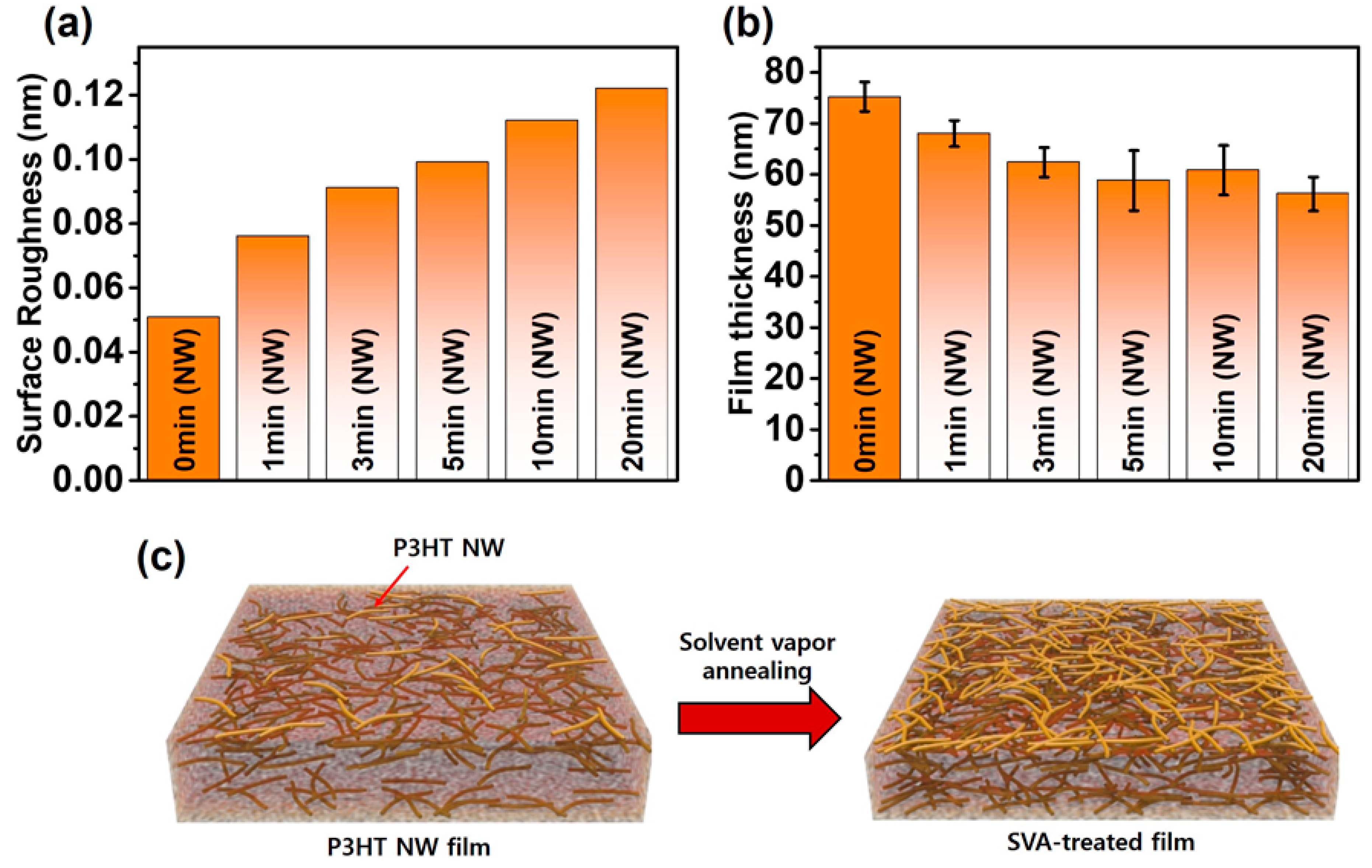