Study on Adsorption and Aggregation in the Mixed System of Polyacrylamide, Cu(II) Ions and Innovative Carbon–Silica Composite

The paper presents an original study on adsorption and aggregation phenomena in a mixed system consisting of a macromolecular compound, heavy metal ions and an innovative adsorbent. The authors used ionic polyacrylamides (PAM), Cu(II) ions and carbon–silica composite (C-SiO2) in the experiments. Such a system has not yet been described in the literature and therefore, the article is of significant novelty and great importance. The composite was prepared by mixing phenol–formaldehyde resin with silica and pyrolysis at 800 °C. The adsorbed amounts of Cu(II) ions and PAM were determined spectrophotometrically. C-SiO2 was characterized using potentiometric titration, microelecrophoresis and Fourier Transform Infrared Spectroscopy (FTIR) analysis. In turn, the C-SiO2 aggregation was established turbidimetrically as well as using a particle size analyzer. The obtained results indicated that both Cu(II) ions and ionic polyacrylamide were adsorbed on the composite surface at pH 6. The highest noted adsorbed amounts were 9.8 mg/g for Cu(II) and 35.72 mg/g for CT PAM-25%. Cu(II) ions increased the anionic PAM adsorbed and reduced the cationic PAM one. The adsorption of anionic PAM (50 ppm) stimulated the solid aggregation significantly. What is more, Cu(II) ions enhanced this process. The size of particles/aggregates formed without additives equaled 0.44 μm, whereas in the mixed Cu(II)/AN PAM system, they were even at 1.04 μm. View Full-Text
Keywords: mixed adsorption layer; adsorption and aggregation mechanism; particle sizeanalysis; turbidimetry; flocculation mixed adsorption layer; adsorption and aggregation mechanism; particle sizeanalysis; turbidimetry; flocculation
►▼ Show Figures 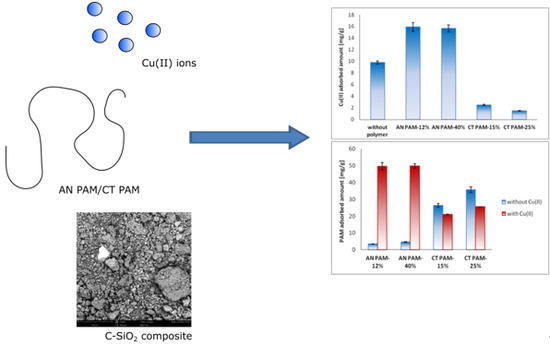