Hybrid Polymerisation: An Exploratory Study of the Chemo-Mechanical and Rheological Properties of Hybrid-Modified Bitumen
Next Article in Special Issue

Metals used for food canning such as aluminum (Al), chromium-coated tin-free steel (TFS) and electrochemically tin-plated steel (ETP) were coated with a 2–3-µm-thick layer of polyaleuritate, the polyester resulting from the self-esterification of naturally-occurring 9,10,16-trihydroxyhexadecanoic (aleuritic) acid. The kinetic of the esterification was studied by FTIR spectroscopy; additionally, the catalytic activity of the surface layer of chromium oxide on TFS and, in particular, of tin oxide on ETP, was established. The texture, gloss and wettability of coatings were characterized by AFM, UV-Vis total reflectance and static water contact angle (WCA) measurements. The resistance of the coatings to solvents was also determined and related to the fraction of unreacted polyhydroxyacid. The occurrence of an oxidative diol cleavage reaction upon preparation in air induced a structural modification of the polyaleuritate layer and conferred upon it thermal stability and resistance to solvents. The promoting effect of the tin oxide layer in such an oxidative cleavage process fosters the potential of this methodology for the design of effective long-chain polyhydroxyester coatings on ETP. View Full-Text
Keywords: bio-based polymers; fatty polyhydroxyesters; can coatings; esterification kinetics; melt-polycondensation bio-based polymers; fatty polyhydroxyesters; can coatings; esterification kinetics; melt-polycondensation
►▼ Show Figures 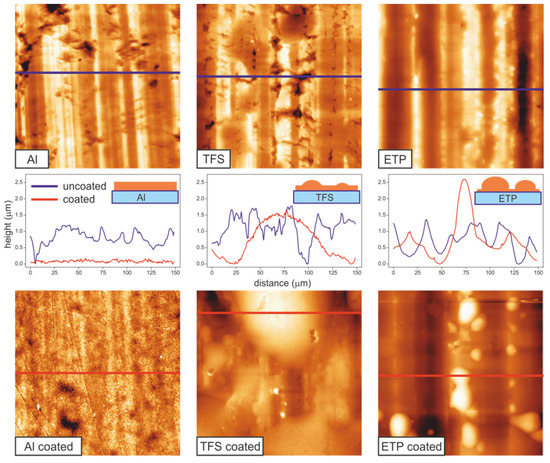