In this research, it was proposed to use carrot cellulose nanofibrils (CCNF) isolated from carrot pomace modified with silver nanoparticles (AgNPs) as a filler of polylactic acid (PLA) composites matrix. The new procedure was based on two steps: first, the preparation of nanocellulose modified with metal nanoparticles, and then the combination with PLA. Two concentrations—0.25 mM and 2 mM—of AgNO3 were used to modify CCNF. Then, PLA was mixed with the filler (CCNF/AgNPs) in two proportions 99:1 and 96:4. The influence of CCNF/AgNPs on mechanical, hydrophilic, thermal, and antibacterial properties of obtained nanocomposites was evaluated. The greatest improvement of mechanical properties was observed for composite containing CCNF with 2 mM of AgNPs, which obtained the lowest Young modulus and highest strain at break. The degradation temperature was lower for PLA with CCNF/AgNPs, but crystallization temperature wasn’t influenced. The addition of CCNF/AgNPs also increased hydrophilicity. The transmission rates of oxygen, nitrogen, and carbon dioxide also increased after the addition of CCNF/AgNPs to PLA. The antibacterial function against Escherichia coli and Bacillus cereus was obtained after the addition of AgNPs but only at the contact surface with the material made, suggesting the lack of migration of nanoparticles from the composite. View Full-Text
Keywords: polylactic acid; nanocellulose; silver nanoparticles; composites; mechanical properties; antibacterial properties polylactic acid; nanocellulose; silver nanoparticles; composites; mechanical properties; antibacterial properties
►▼ Show Figures 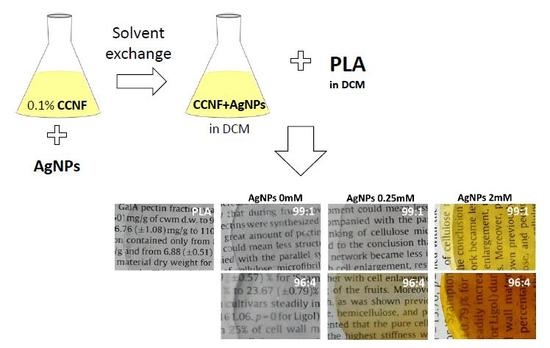