Hyperbranched Polycarbosiloxanes: Synthesis by Piers-Rubinsztajn Reaction and Application as Precursors to Magnetoceramics
Previous Article in Journal

Although the anomalous low crystallinity of octyl β-D-glucoside (β-OGlu) was first proposed more than 30 years ago, many fundamental aspects of its crystal structure and of the crystalline phase behavior of the pure substance have remained uncertain. In this paper, we employ grazing-incidence wide-angle X-ray-diffraction measurements using a two-dimensional detector (2D-GI-WAXD) and perpendicularly aligned crystalline films to demonstrate that β-OGlu forms crystal structures consisting of an intermediate phase—like a ripple phase with two large crystal-lattice constants, a and c, comparable to the lengths of its bilayer structures. Furthermore, solid-to-solid phase transitions accompanied by latent heat confirm the existence of a solid-solution-like phase consisting of a crystalline and a liquid-crystal (LC) phase, which persists over a 20 °C temperature range, in a single-component system. In addition, the system forms a superlattice, accompanied by a change in packing of the component sugars in the partial-melting state; this shift is different from the gel-crystal transition observed for a typical lipid system. These facts indicate that even in the crystalline phase formed from a single component, each individual β-OGlu molecule in a single-component phase plays a versatile role in the crystallisation and melting processes. These findings must somewhat explain the specific co-assembling features with proteins of β-OGlu, which has long been used empirically in biochemistry. View Full-Text
Keywords: octyl β-D-glucoside; crystal structure; phase transition; GI-WAXD; superlattice octyl β-D-glucoside; crystal structure; phase transition; GI-WAXD; superlattice
►▼ Show Figures 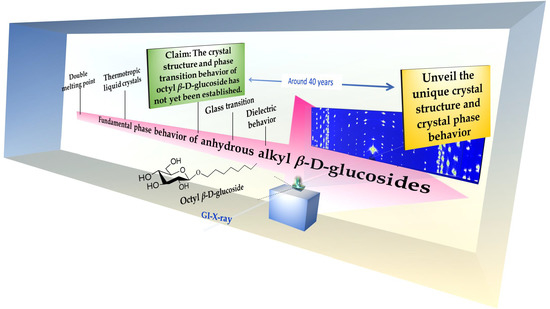