:
Thermally stable composites obtained by the low-temperature carbonization of an elastomeric matrix filled with hard dispersed silicon carbide particles were obtained and investigated. Evolution of the microstructure and of mechanical and thermal characteristics of composites during thermal degradation and carbonization processes in a wide range of filling from 0 to 450 parts per hundred rubber was studied. For highly filled composites, the compressive strength values were found to be more than 200 MPa; Young’s modulus was more than 15 GPa. The thermal conductivity coefficient of composites was up to 1.6 W/(m·K), and this magnitude varied slightly in the temperature range of 25–300 °C. Coupled with the high thermal stability of the composites, the observed properties make it possible to consider using such composites as strained friction units instead of reinforced polymers.
Keywords:
composites; rubbers; carbonization; thermal destruction; silicon carbide; thermal conductivity 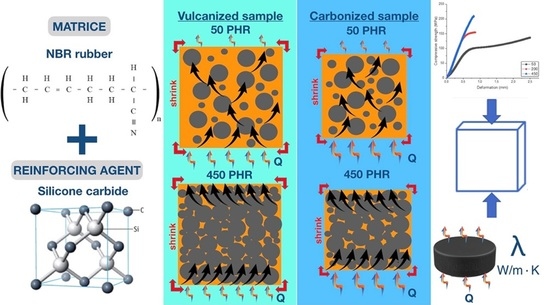 The use of reinforced polymer materials makes it possible to create structures with high weight efficiency and optimal combinations of mechanical, antifriction and thermal properties, which allows them to replace traditional metal and ceramic materials successfully. Some of the factors limiting the use of polymers and polymer based composites are low operating temperatures due to low melting points and/or low temperature of the beginning of intense thermal degradation of polymers, and low thermal conductivity, which for a most of polymers lies within 0.05–0.35 W/m·K [1,2,3].
The thermal conductivity of polymers can be increased by creating heat-conducting structures based on fillers with high thermal conductivity, such as carbon nanotubes [4], graphene [5], graphite [6], hexagonal boron nitride (BN) [7], aluminum nitride (AlN) [8], alumina (Al2O3) [9], silicon carbide (SiC) [10], etc. The percolation threshold in such compositions, at which a significant increase in thermal conductivity occurs, usually lies at filling degrees of above 20 vol.% [11]. However, at such high filling degrees, the mechanical characteristics of the materials usually decrease drastically [12]. Therefore, elaboration of polymer composites with both high thermal conductivity and high strength characteristics is an urgent task.
Heat resistance and the operating temperatures of polymer-based composites are limited by the heat resistance of matrix polymer. Carbon matrices obtained by pyrolysis of various polymer binders [13,14,15], coal tar [16,17,18] and petroleum [19,20,21] pitches have exceptionally high heat resistance. A direct approach in getting carbon matrices via classical carbonization is the rapid implementation of the pyrolysis process, which ends with the formation of char at temperatures of about 500–550 °C, followed by the formation of a carbon matrix at temperatures of 900–1700 °C. It is known that thermal degradation results in an increase in the given polymer material’s thermal stability; however, at the same time, thermal degradation results in a decrease in the strength and deformation characteristics of materials [22,23,24].
Recently, we presented an alternative approach, consigning in the formation of a heat-resistant matrix during thermal degradation via low rate heating. Heating regimes in this case are selected to make the rates of consolidation processes (i.e., rate of cross-linking process and the rate of depolymerization reactions chains termination) higher than the rate of the elastomeric binder’s thermo-oxidative destruction. Volatile pyrolysis products such as N2, NO2, CO and bound water are removed from the material during heating, and the amount of carbon in the remaining material increases [25,26]. The materials obtained show both high thermal conductivity and good strength characteristics in a wide range of filling amounts. In present study we used this approach to create highly filled composites reinforced with silicon carbide, which is widely used as filler for polymer composites with advanced thermal conductivity [10,12,27,28].
Nitrile butadiene rubber (NBR) is one of the most widespread elastomers, characterized by low cost, high resistance to oil products and high resistance to thermal oxidative degradation. Due to its advanced properties, NBR is widely used as a matrix material in composites reinforced with carbon black [29,30], graphene [31], graphene oxide [32,33], SiO2 [34], Al2O3 [32] and other inorganic particles. There are some reports related to NBR-based materials’ thermal degradation and aging at the temperatures less than 200 °C [35,36,37], whereas no data on the NBR carbonization behavior was observed.

BNKS-18 AMN TU 38.30313-2006 nitrile butadiene rubber (NBR) (JSC Krasnoyarsk Synthetic Rubber Plant, Krasnoyarsk, Russia) with a mass fraction of acrylonitrile of 17–20 wt% was used as a matrix material. Mooney viscosity MML 1 + 4 (100 °C) for this elastomer was 42–45 units, and the ash content was 0.4 wt%.
Finely dispersed SiC powder (grade 64C, Litpromabrasiv Ltd., Moscow, Russia) was used as a filler when creating elastomeric compositions. The initial SiC powders contained mainly one carbide modification, i.e., polytype II (PSC hP12/14, structural type P6.3mc), with a lattice parameter a = 0.3081 nm. Total content of SiC in powder was not less than 98.0 wt%, and the powder contained impurities of Fe (not more than 0.4 wt%) and C (not more than 0.4 wt%).
SiC particle size distribution was studied using a laser diffraction particle size analyzer Fritsch Analysette-22 Nanotech (Fritsch GmbH, Idar-Oberstein, Germany), by ISO 24235: 2007 Ceramic composites. The determination of the particle size distribution of ceramic powders by laser diffraction method is shown in Figure 1.
The SiC powder has a bimodal particle size distribution, with 20% of the particles having sizes less than 400 nm. The d10, d50 and d90 values for the filler were of 0.110, 1.93, and 4.84 µm, respectively, and the average volumetric diameter D [4.3] was 2.28 µm. The bulk density of SiC was 0.579 g/cm3, and the tapped density, measured by Tapped Density Analyzer—Quantachrome Instruments, in accordance with ISO 787-11, was found to be of 0.985 g/cm3. As will be discussed below, SiC particle size distribution affects strongly the structures and properties of composite materials.

To study the effect of the SiC filling on the composite properties, samples containing from 0 to 450 parts per hundred rubber (PHR) with a filling step of 50 parts by weight of SiC were prepared. Sample formation includes preparing the initial components, introducing of filler and a vulcanization agent into the elastomer, vulcanization of elastomer samples and low-temperature carbonization in an inert atmosphere.
Before being added to the elastomeric mixture, SiC powder was dried at 115 °C for 6 h. The filler was introduced into NBR using laboratory rubber mixing rollers BL-6175-A (Dongguan Baopin Precision Instrument Co., Ltd., Dongguan, China). The shaft speed ratio was 1:1.25; the complete mixing and mixture homogenization time was 40 min. Dicumyl peroxide (linear formula (C6H5C(CH3)2O)2, CAS Number 80-43-3, Aldrich 329541, 98.0 mass. % purity, melting point of 38 °C, Sigma-Aldrich Corp., St. Louis, MO, USA) was used as a vulcanizing agent. Vulcanization of composite samples in the form of plates with dimensions of 210 × 290 × 4 mm was carried out in steel mold at a temperature of 170 °C for 10 min using an AVPM-901 vulcanization press (Tesar-Ingeneering Ltd., Saratov, Russia) with a mold constant clamping force of 5 MPa.
For the final formation of the composite samples, the obtained plates were subjected to low-temperature carbonization in an inert atmosphere (argon) with constant heating from room temperature to 340 °C for 12 h in a PM-16M muffle furnace (Electropribor LLC, Saint Petersburg, Russia). Samples for investigation were made by mechanical processing using a diamond tool.

2.3. Characterization of the Samples’ Structures

The densities of vulcanized and carbonized samples were measured by hydrostatic weighing in distilled water and ethyl alcohol according to ISO 1183-1: 2019 (Plastics—Methods for determining the density of non-cellular plastics) using an AND GR 202 analytical balance (A & D Limited, Tokyo, Japan) equipped with a hydrostatic weighing AD-1653.

Three-point bending and compression tests were carried out at room temperature using Zwick/Roell Z020 universal tensile testing machine (Zwick GmbH, Ulm, Germany) using a MultiXtens high-precision strain measurement system. Before testing all the samples were conditioned in accordance with ISO 291: 2008 (Plastics—Standard atmospheres for conditioning and testing) under a standard 23/50 atmosphere for 88 h. The total number of specimens tested at one point in compression and three-point bending tests was not less than 7.
Flexural tests were carried out in accordance with ISO 178: 2019 (Plastics—Determination of flexural properties); the studied samples were 80 × 10 × 4 mm. The samples were loaded until fracture at a test speed of 2 mm/min.
Compression tests of carbonized samples were performed according to ISO 604:2002 (Plastics—Determination of compressive properties). The breaking force was measured using specimens with dimensions of 10 × 10 × 4 mm, and elastic modulus was measured using samples with dimensions of 50 × 10 × 4 mm. The test speed was 2 mm/min. To obtain elastic modulus value the load was applied to the samples while taking into account the required correction of the initial part of strain–stress plot in accordance with ISO 604:2002.

Thermal diffusivity was measured in the temperature range from 25 to 300 °C in accordance with ASTM E1461-07 (Standard Test Method for Thermal Diffusivity by the Flash Method) using the NETZSCH LFA447 NanoFlash device (Netzscg GmbH, Selb, Germany). The study was carried out using cylindrical specimens each having a 12.7 mm diameter and a thickness of 1–1.5 mm.
Specific heat capacities Cp of composite materials in the temperature range from 25 to 300 °C were measured using a NETZSCH DSC 204 Phoenix F1 differential scanning calorimeter (Netzscg GmbH, Selb, Germany) in accordance with ISO 11357-4: 2014 (Plastics—Differential scanning calorimetry (DSC)—Part 4: Determination of specific heat capacity). Sapphire was used as standard reference. The tests were carried out on pieces 5 mm in diameter and weighing 24–25 mg, in a protective argon atmosphere.
Thermal conductivity was calculated using formula: where λ(t) is thermal conductivity coefficient at a certain temperature t, W/(m·K); a(t) is thermal diffusivity at certain temperature t, mm2/s; dk is material density, g/cm3; Cp(t) is specific heat capacity, J/(g·K).

The study of the thermodynamic stability of vulcanized and carbonized samples was performed by thermogravimetric analysis (TGA) using a TGA Q500 TA Instruments thermogravimetric analyzer (TA Instruments, New Castle, DE, USA). The study was carried out in an atmosphere of an inert gas (argon, purity 99.998%) in the mode of heating to a temperature of 600 °C at a rate of 5 K/min, followed by isothermal holding. 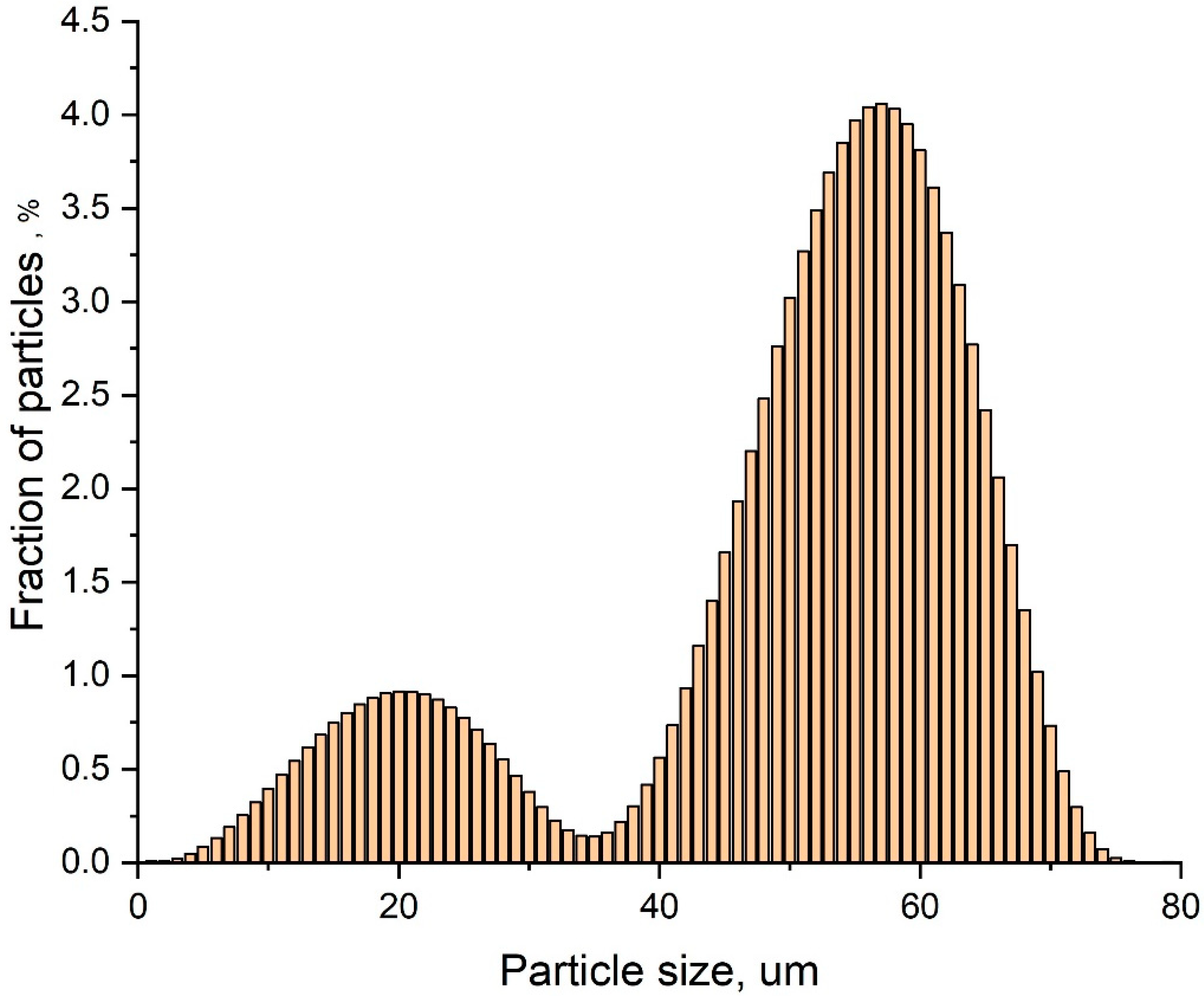 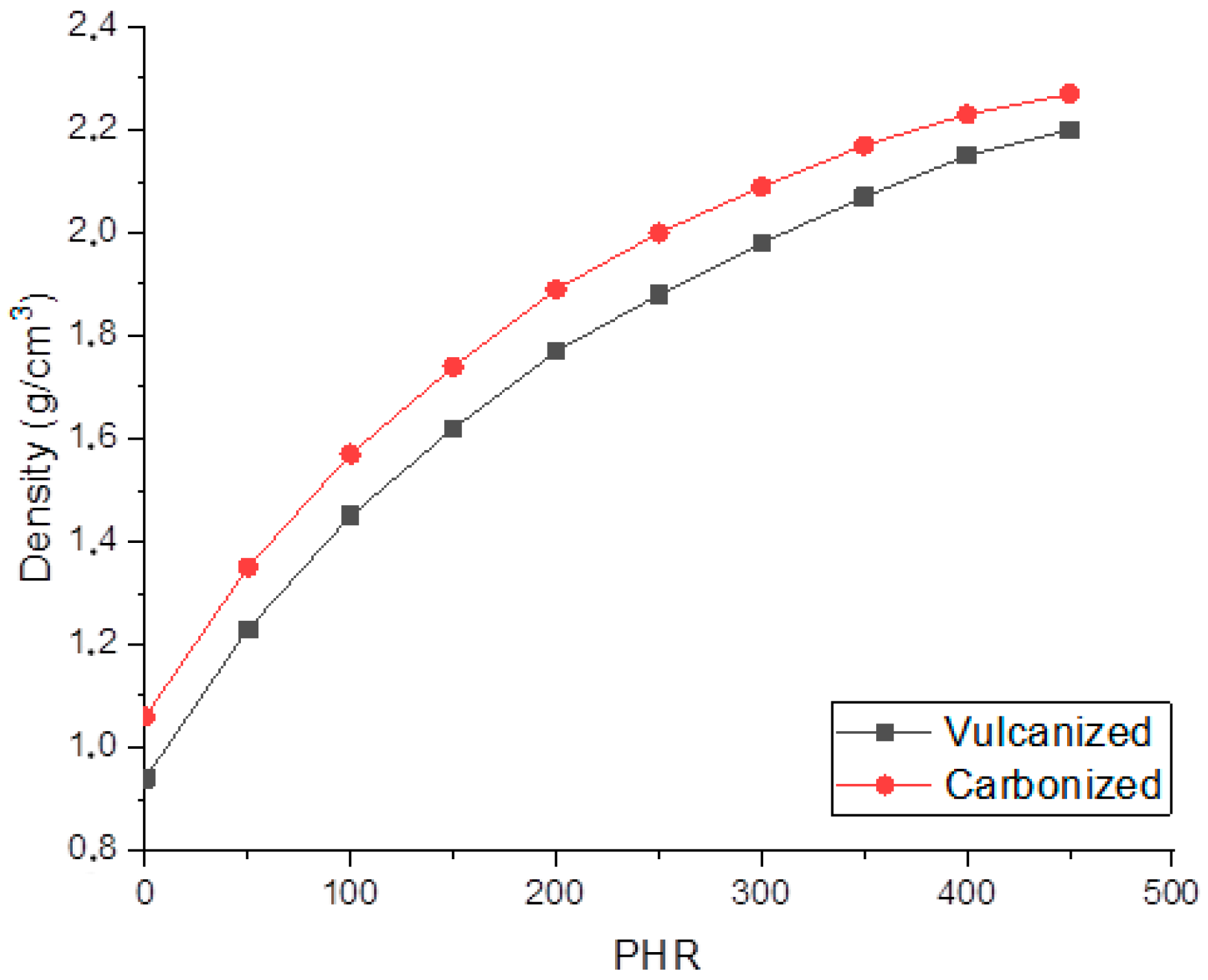 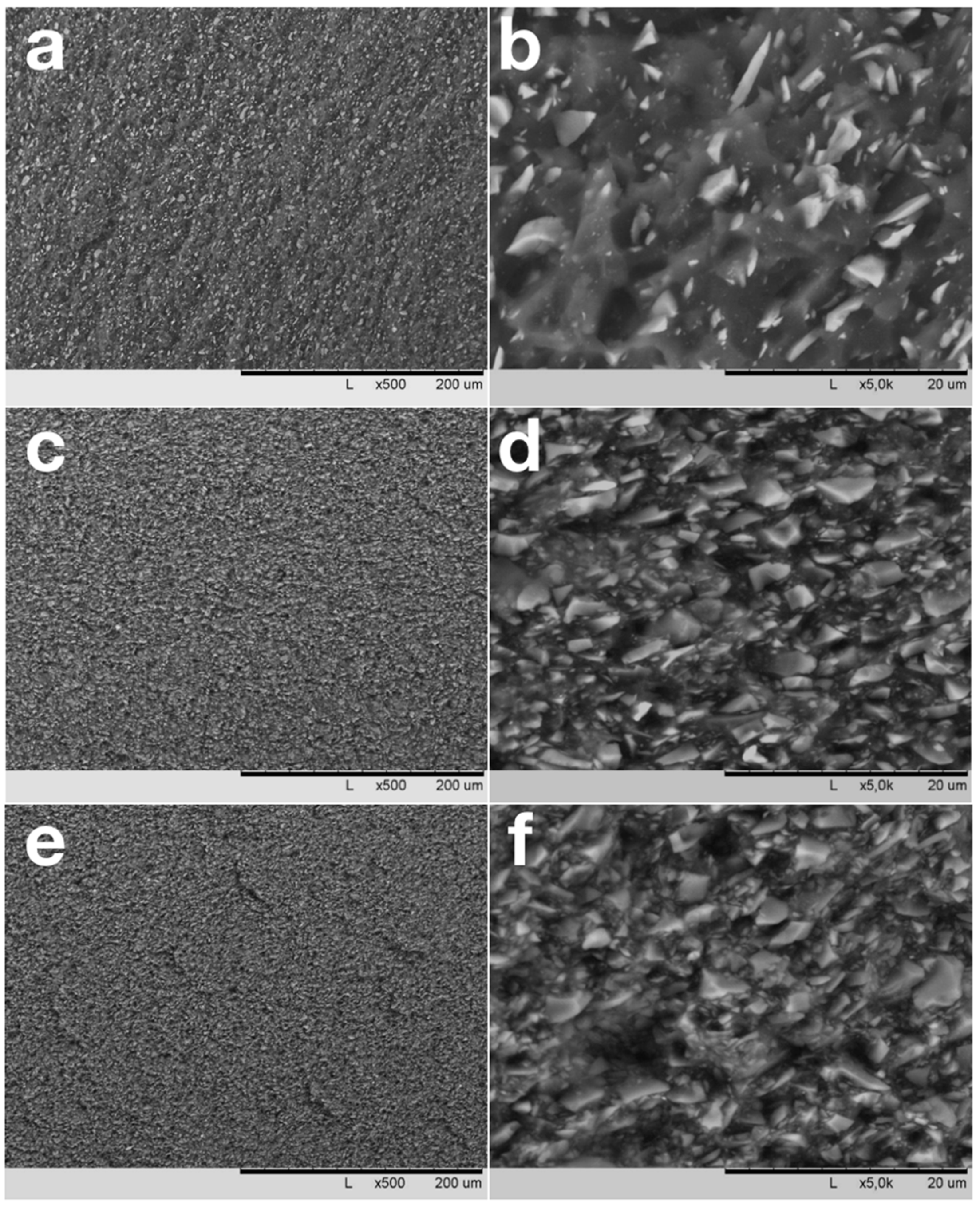 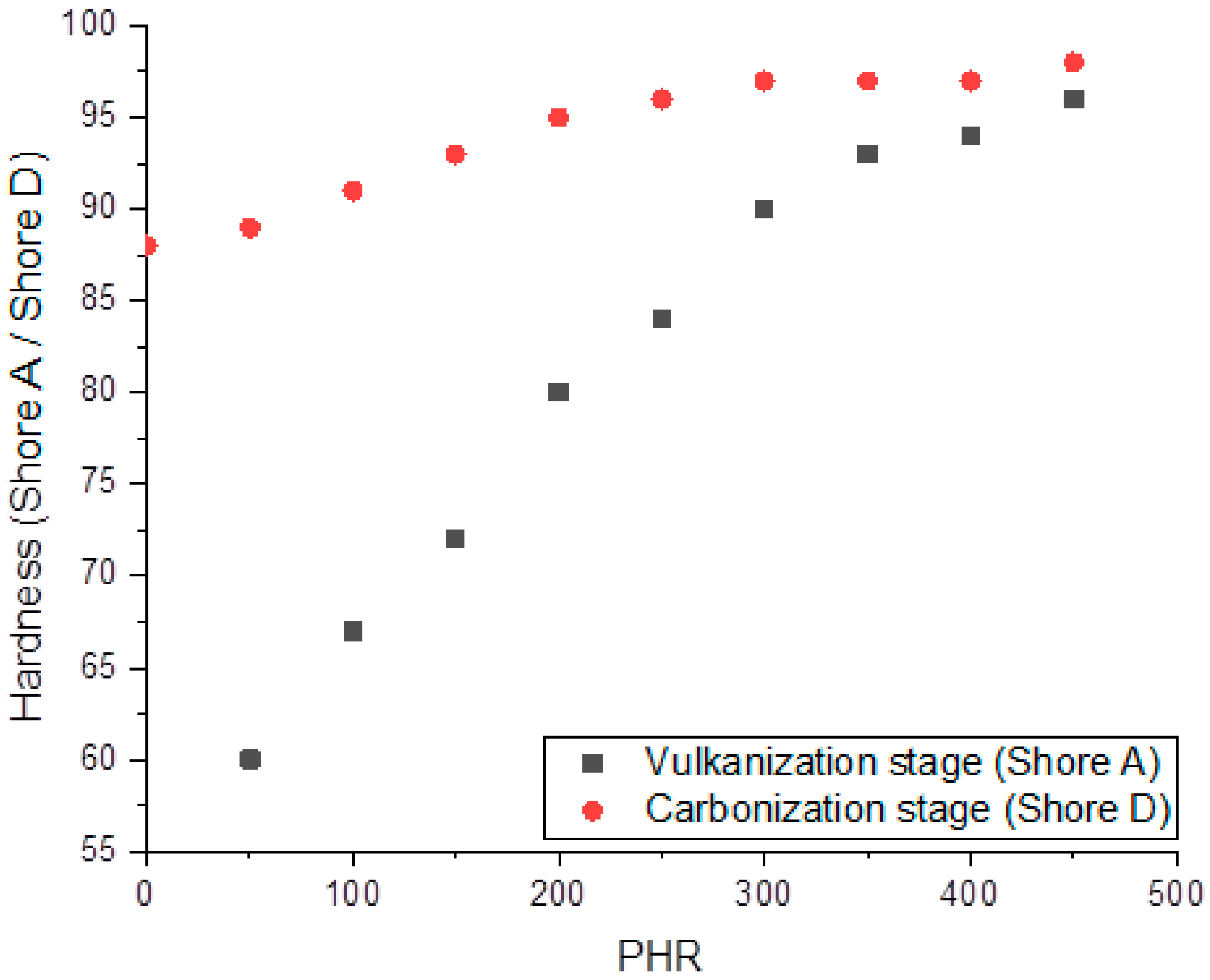