Polypyrrole (PPy) based electroactive materials are important building blocks for the development of flexible electronics, bio-sensors and actuator devices. As the properties and behavior of PPy depends strongly on the operating environment—electrolyte, solvent, etc., it is desirable to plant immobile ionic species into PPy films to ensure stable response. A premade ionic polymer is not optimal in many cases, as it enforces its own structure on the conducting polymer, therefore, polymerization during fabrication is preferred. Pyrrole (Py) was electropolymerized at low temperature together with a polymerizable ionic liquid (PIL) monomer in a one-step polymerization, to form a stable film on the working electrode. The structure and morphology of the PPyPIL films were investigated by scanning electron microscopy (SEM), energy dispersive X-ray spectroscopy (EDX), Fourier-transform infrared (FTIR) spectroscopy and solid-state NMR (ssNMR) spectroscopy. The spectroscopy results confirmed the successful polymerization of Py to PPy and PIL monomer to PIL. The presence of (TFSI–) anions that balance the charge in PPyPIL was confirmed by EDX analysis. The electrical properties of PPyPIL in lithium bis(trifluoromethanesulfonyl)-imide (LiTFSI) aqueous and propylene carbonate solutions were examined with cyclic voltammetry (CV), chronoamperometry, and chronopotentiometry. The blend of PPyPIL had mixed electronic/ionic conductive properties that were strongly influenced by the solvent. In aqueous electrolyte, the electrical conductivity was 30 times lower and the diffusion coefficient 1.5 times higher than in the organic electrolyte. Importantly, the capacity, current density, and charge density were found to stay consistent, independent of the choice of solvent. View Full-Text
Keywords: PPyPIL; electropolymerization; ssNMR; blend structure; electrochemical performance PPyPIL; electropolymerization; ssNMR; blend structure; electrochemical performance
►▼ Show Figures 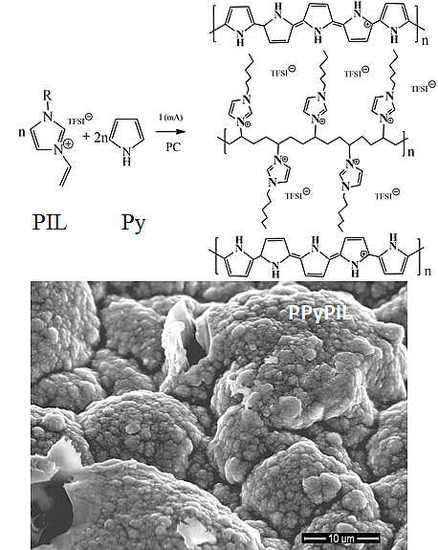