Polyhydroxyalkanoates (PHAs) have emerged as a promising biodegradable and biocompatible material for scaffold manufacturing in the tissue engineering field and food packaging. Surface modification is usually required to improve cell biocompatibility and/or reduce bacteria proliferation. Picosecond laser ablation was applied for surface micro structuring of short- and medium-chain length-PHAs and its blend. The response of each material as a function of laser energy and wavelength was analyzed. Picosecond pulsed laser modified the surface topography without affecting the material properties. UV wavelength irradiation showed halved ablation thresholds compared to visible (VIS) wavelength, revealing a greater photochemical nature of the ablation process at ultraviolet (UV) wavelength. Nevertheless, the ablation rate and, therefore, ablation efficiency did not show a clear dependence on beam wavelength. The different mechanical behavior of the considered PHAs did not lead to different ablation thresholds on each polymer at a constant wavelength, suggesting the interplay of the material mechanical parameters to equalize ablation thresholds. Blended-PHA showed a significant reduction in the ablation threshold under VIS irradiation respect to the neat PHAs. Picosecond ablation was proved to be a convenient technique for micro structuring of PHAs to generate surface microfeatures appropriate to influence cell behavior and improve the biocompatibility of scaffolds in tissue engineering. View Full-Text
Keywords: polyhydroxyalkanoates (PHAs); picosecond pulsed laser ablation; surface micro structuring polyhydroxyalkanoates (PHAs); picosecond pulsed laser ablation; surface micro structuring
►▼ Show Figures 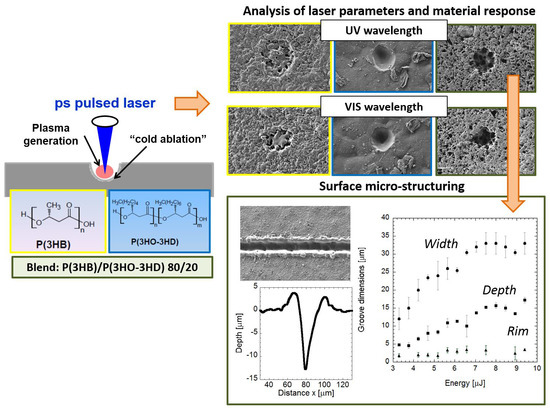