:
Currently, there is a wide range of materials for motorcyclists available on the market that have a significant ability to absorb impact energy. Understanding the aging processes of materials is crucial for guaranteeing the long-term durability and safety of a new product. For this reason, the effect of accelerated aging on the mechanical and structural properties of the multifunctional materials used in commercial protectors was analyzed. The accelerated aging considered in this study simulated 3 years of use under real conditions. Then, DMTA and FT-IR research, as well as impact tests, were carried out on the commercially available protectors for motorcyclists, before and after the accelerated aging processes. Structural analysis using FT-IR showed no significant changes in the structure of the polymers used for producing the protectors. The DMA test results are consistent with those obtained from the impact study. Both methods showed that the samples maintain their protective properties, after accelerated aging. All of the examined protectors show that an increase in force is transferred through the sample, after the accelerated aging processes, but they still provide protection, according to the ISO standard.
Keywords:
polymers; accelerated aging; impact protectors

Commercially available protectors for the limbs and joints of motorcyclists that absorb impact energy were selected. The main constituent of the protectors in sample 1 and 2 is polyurethane, while for sample 3, it is ethylene-vinyl acetate copolymer (EVA). All samples showed a level 2 performance, according to the manufacturer. Samples had an irregular shape, as presented in Table 1.

2.1. Density Determination by the Hydrostatic Method

The density of solids, determined by the hydrostatic weighing method, are considered [15]. Hydrostatic density measurement consists of weighing an object of a known mass, while it is suspended from a balancing structure in a liquid with some assumed density value. The indicated loss of mass being equal to the mass of the displaced liquid, we are able to calculate the true volume of the unknown density. To precisely measure the mass of a weight in air, buoyancy correction of the air for the volume of the weight is required.
The densities of the examined objects were determined using the hydrostatic method and were calculated using Equation (1): where ρ is the density of the sample [g/cm3], A is the weight of the sample in air [g], B is the weight of the sample in fluid [g], and ρ0 is the fluid density (0.9982 g/cm3, temperature of the density measurement: 20 °C).

Samples (both before and after the accelerated aging process, as shown in 3.5.) were characterized using an FTIR spectrophotometer (Thermo Scientific Nicolet iS10, Waltham, MA, USA). In order to perform IR analysis correctly, two measurements were conducted: the background spectrum of the crystal and the spectrum of the test sample. The FTIR spectrum was determined as the ratio of the sample spectra and the background spectrum (when performing the background spectrum, the response of the spectrometer itself was measured, without any sample). Dividing the spectrum of the sample by the background spectrum (which is called “rationing”) removes the adverse effects caused by the instrument and ambient conditions. Thus, the signals present in the final spectrum exclusively come from the sample.
The tests were performed using the single-reflection method, with the following device work parameter settings: DTGS KBr detector; measuring range: 4000–600 cm−1; accuracy of the measurement recording: 2; mirror speed: 0.31/s; aperture: 50; minimum number of recorded scans: 32; reflective snap of the ITR type (Thermo Scientific), with a diamond crystal in the reflection angle of 45°. Each scan was repeated three times and averaged.

The tests using the DMA/SDTA 861e analyzer (Mettler Toledo, Greifensee, Switzerland), using stretching as the type of deformation, were performed. The samples were subjected to dynamic deformation, with a force of 1N, a deformation amplitude of 10.5 µm and a frequency of 1 Hz. The dimensions of the samples were 4 × 10.5 mm, and the thickness was about 3 mm. For each of the samples, measurements in the temperature range of −60 °C to 50 °C, with a heating rate of 3 °C/min were conducted. The modulus of elasticity E’ was determined, as well as the loss modulus E’’ and the mechanical loss factor (tan δ = E’’/E’), as a function of the temperature. The tests for the samples of polymeric materials, before and after the aging process, were performed.

An impact resistance study was performed, according to the presumptions of the standard, PN-EN 1621-1:2012—“Motorcyclists’ protective clothing against mechanical impact” [16]. To perform the impact tests, a drop tower was used, which allows for a gravity drop of a mass along vertical guides, with an energy amount of (50 ± 2) J, onto a sample placed on a test anvil. A diagram of the construction of the drop tower is shown in Figure 1.
The principle of the device operation is as follows: along the vertical guides, a hammer of a specific mass falls, with a certain amount of energy, onto a sample placed on an anvil, which is attached to the base of the device. During the test, the force transmitted to the anvil, under the tested sample, is recorded by a piezoelectric force sensor, which is mounted on the anvil.
During the above-mentioned tests, a drop hammer made of polished steel, with a flat surface of 40 × 80 mm, rounded edges of 50 ± 5 mm and a mass of 5000 ± 10 g, was used. An anvil made of polished steel, with a semi-circular surface, a radius of 50 mm and a height of 180 ± 20 mm, was also used. The examination was performed under ambient conditions, and the samples were conditioned beforehand for 48.0 ± 0.5 h, at a temperature of 23 ± 2 °C and relative humidity of 50 ± 5%.
Regarding the impact attenuation, the standard, PN-EN 1621-1:2012 [16], introduces two levels of performance:
The values of the transferred force for each level are stated in Table 2.
Based on the obtained data, it can be stated that each of the examined samples complies with level 2 performance, according to the standard, PN-EN 1621-1:2012.

Accelerated aging of the examined materials was performed using a thermostatic chamber SAL VIS LAB, type IC-80 (Renggli AG, Rotkreuz, Switzerland).
Simulation of the accelerated aging process using the Arrhenius formula, according to ASTM 1980F, was performed [17]: where AAF is the accelerated aging factor, TAA is the accelerated aging temperature [°C], TRT is the storage temperature in the real-time aging of the sample [°C], and Q10 is the aging factor, determined using the kinetics of changes in the selected property/parameter of the material, at temperature changes of 10 °C.
In order to calculate the real aging time, the following equation was used:
ATT = (365 days)/AAF
where ATT is the time of accelerated aging, which is equivalent to the real-time aging (corresponding to 3 years of use under real conditions).
The parameter values of TAA = 65 °C, TRT = 22 °C and Q10 = 2, as well as the corresponding period of 3 years of use under real conditions, were assumed [18,19,20]. The implementation of the above-listed values, shown in Formulas 2 and 3, included the following coefficient values: AAF = 19.70 and ATT = 56 days.

The densities of the tested samples are shown in Table 3.
All samples have a similar level of density, regardless of whether the accelerated aging was performed or not. The most significant change for sample 1 was detected when the density increased by about 9%, after accelerated aging, in comparison to the initial sample of the tested material system. However, the detected change was insignificantly low in relation to the potential alteration to the performance relating to personal protection.

Based on the FTIR spectra (Figure 2, Figure 3 and Figure 4) used for the studied systems, it was found that the accelerated aging process did not affect the structural and chemical changes of the polymers, i.e., the constituents, of the tested samples. This is evidenced by the lack of significant changes in the structure of the tested samples subjected to the process of accelerated aging, compared to the samples before aging.
Figure 2, Figure 3 and Figure 4 present the reflection FTIR spectra of the studied samples, before and after the process of accelerated aging.
The FTIR spectra of samples 1 and 2 are similar, and the main constituent of the protector systems is polyurethane. The characteristic absorption bands were found to be as follows: the absorption bands located in the range λ = 2850 cm−1–3000 cm−1 are indicative of the asymmetric and symmetric stretching vibrations of the methyl groups. The band located at λ = 3315 cm−1 is attributed to the stretching vibration of the N-H groups. The band at λ = 1533 cm−1 corresponds to the N-H deformation, whereas λ = 1728 cm−1 corresponds to the C=O groups [4].
The FTIR spectra of sample 3 suggested that the main constituent of the protector is ethylene-vinyl acetate copolymer (EVA). The characteristic absorbances of some bands assigned to the vinyl acetate units were identified at λ = 1721 cm−1, 1269 cm−1, 1019 cm−1, which may be related to the absorbance of the ethylene groups at λ = 2929 cm−1, 2860 cm−1, 1463 cm−1, and 731 cm−1.

The lowest values of the maximum force transferred under the sample were obtained for sample 2: 11.65 ± 2.27 kN. The values for sample 1 and 3 are as follows: sample 1: 12.84 ± 0.68 kN; sample 3: 14.30 ± 2.89 kN. The results of the impact tests are presented in Figure 7.
After the accelerated aging process, an increase in the maximum value of the transmitted force was noted for each of the tested samples. Depending on the type of tested sample, there was an increase in the value of the transmitted force ranging from 18% to 45%. In the case of sample 3, the increase in the value of force transferred under the sample was so large that it caused a change in the level of protection from level 2, before accelerated aging, to level 1 after the accelerated aging process.
Sample 1 showed the best properties, i.e., the lowest value of the maximum force transmitted under the sample and the lowest range of changes (18%) in this parameter, after the accelerated aging process.

The obtained results of the research allowed the samples to be verified. The samples retained their properties (or the degree of change is acceptable) and functionality after the simulation of the accelerated aging processes. Shock absorbing systems, used in clothing for motorcycle riders, are an essential element for protecting users against harm or injuries. Based on the obtained research results concerning the examined systems, it can be concluded that
This research shows that the tested samples retain stable protective properties over time. We expect that the samples will protect the limbs of motorcycle riders in the event of an accident for 3 years, which will be validated in the next stage of the research. In the future, the samples should be exposed to natural weathering and climatic conditions for 3 years. After that, DMTA analysis and impact resistance analysis should be performed, and the results should be compared with the results obtained from the accelerated aging simulation. 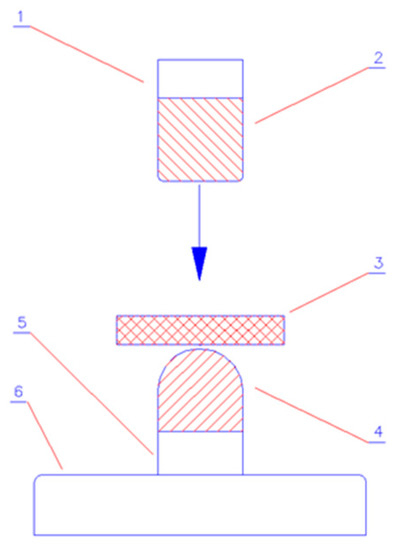 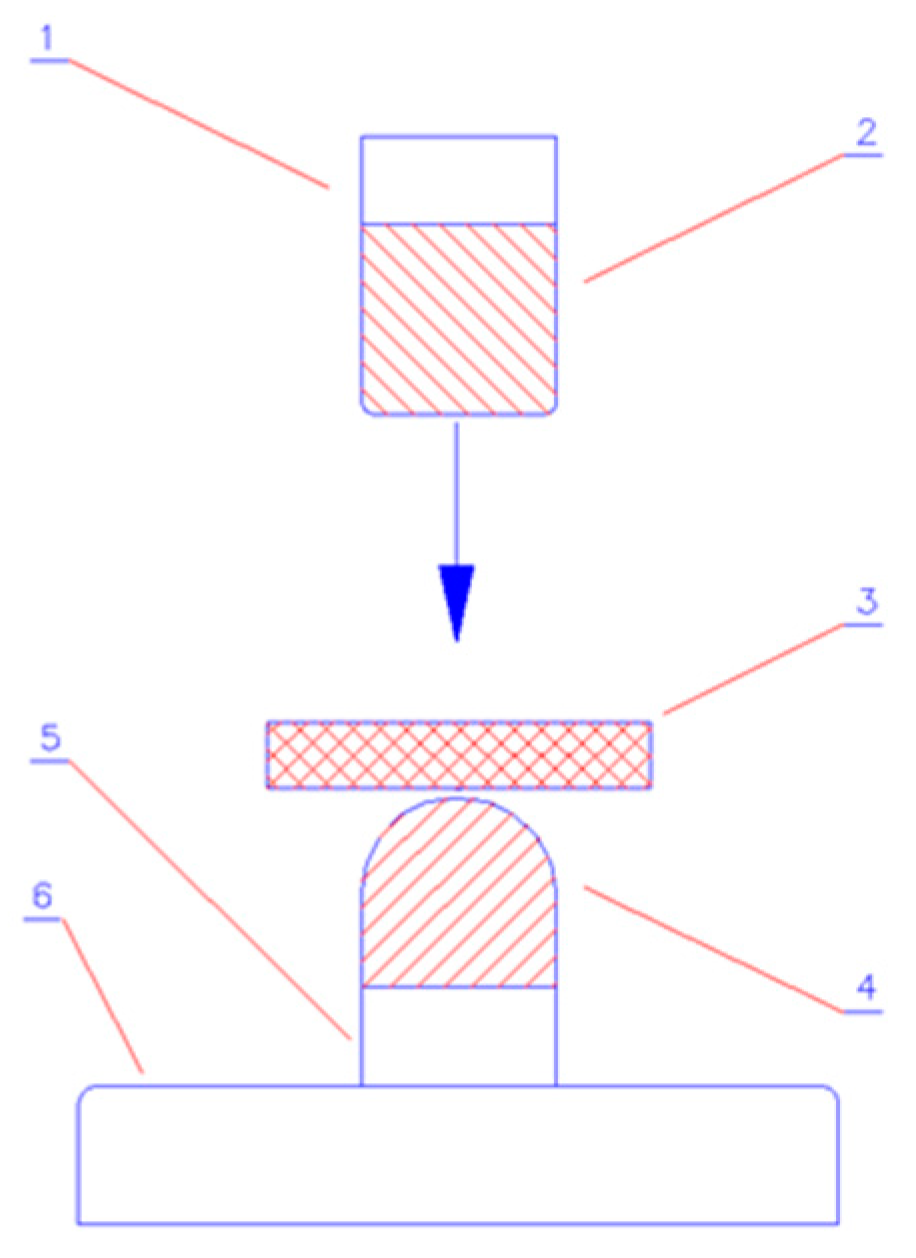 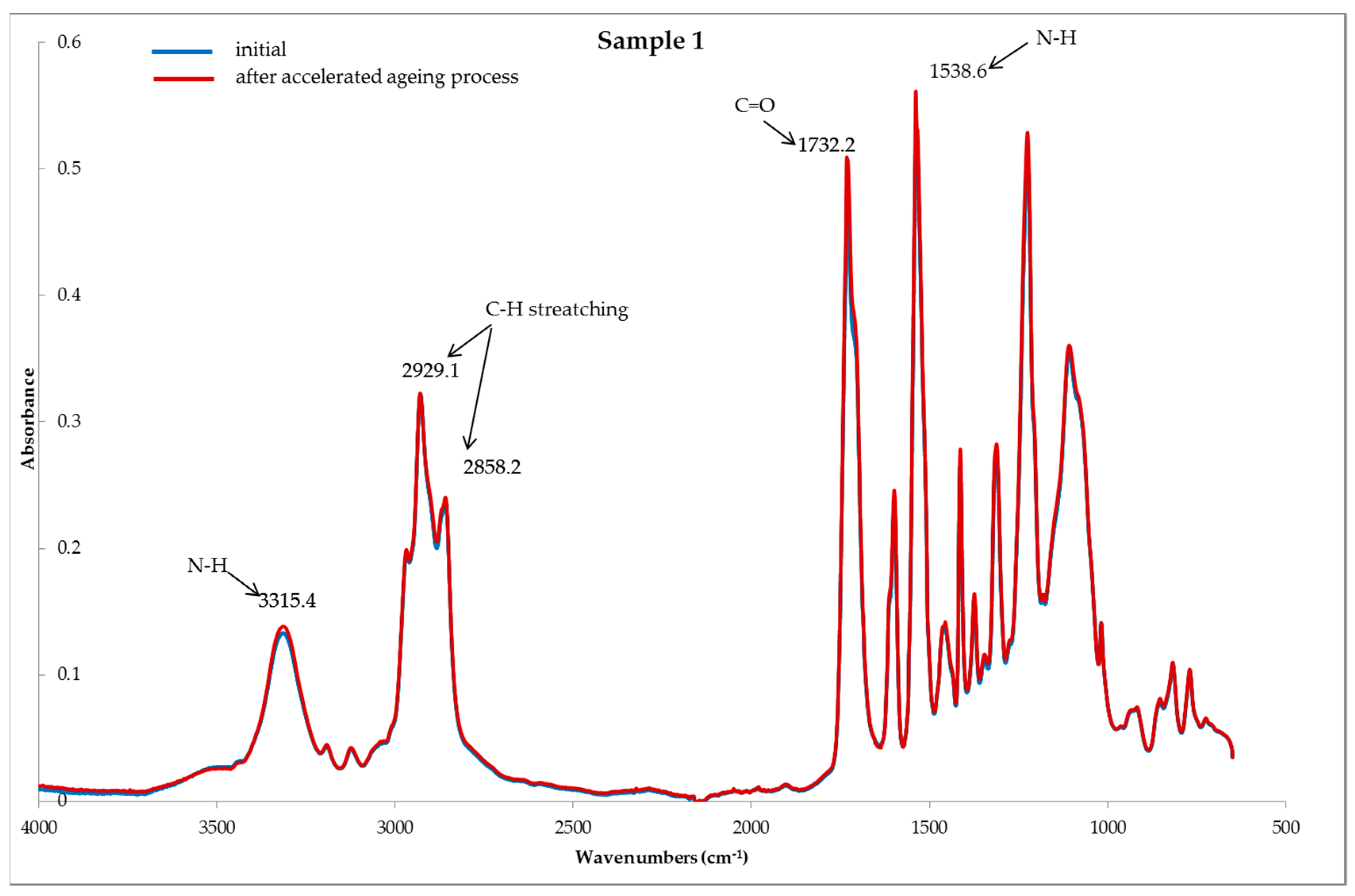 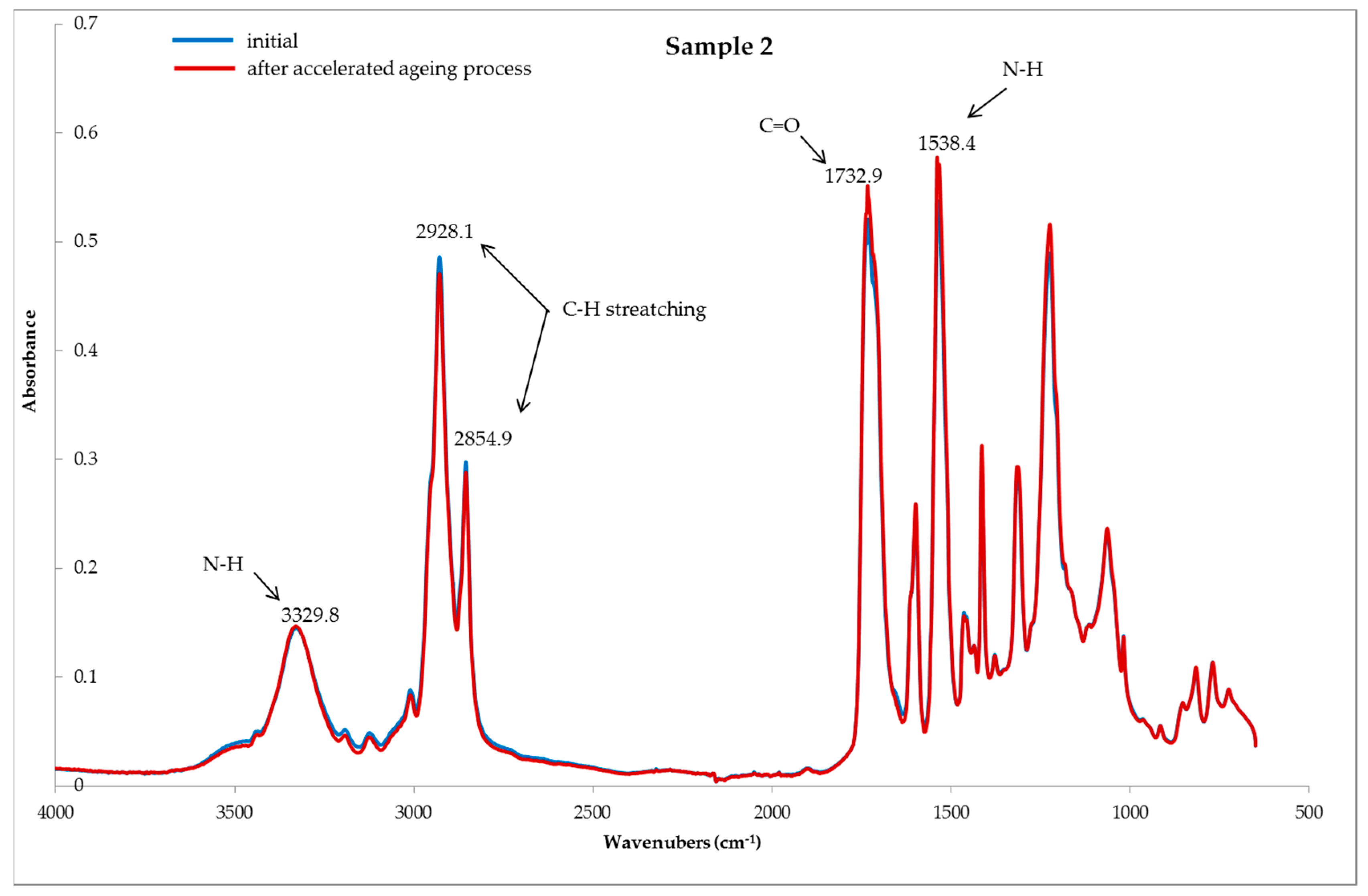 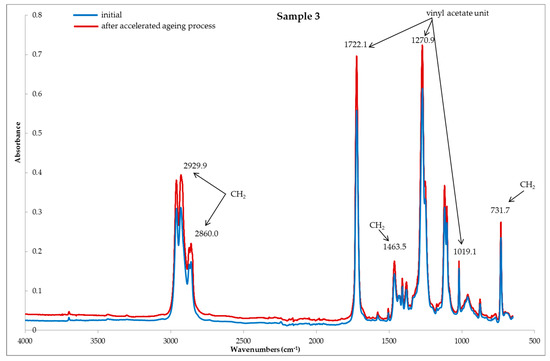 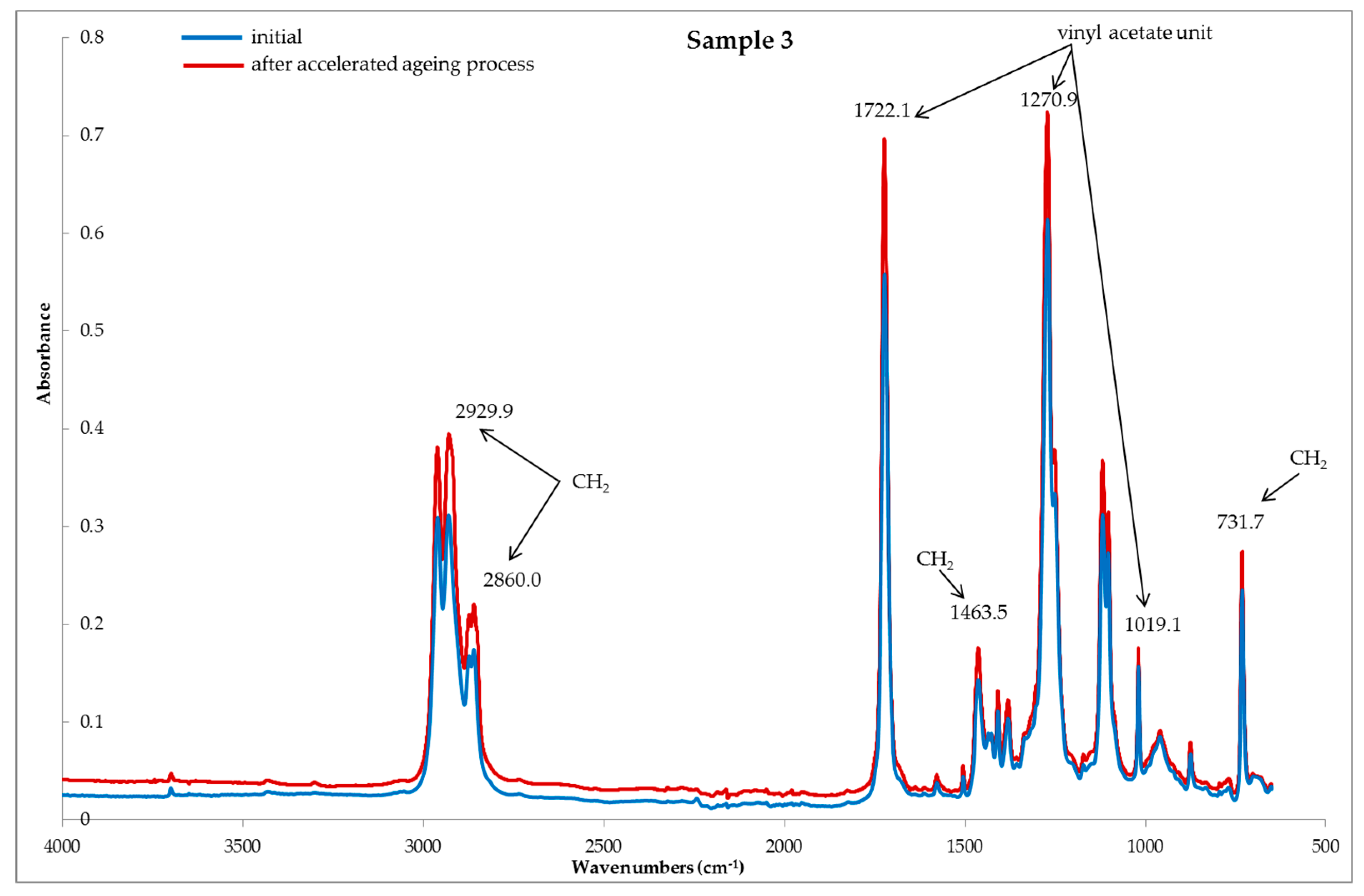 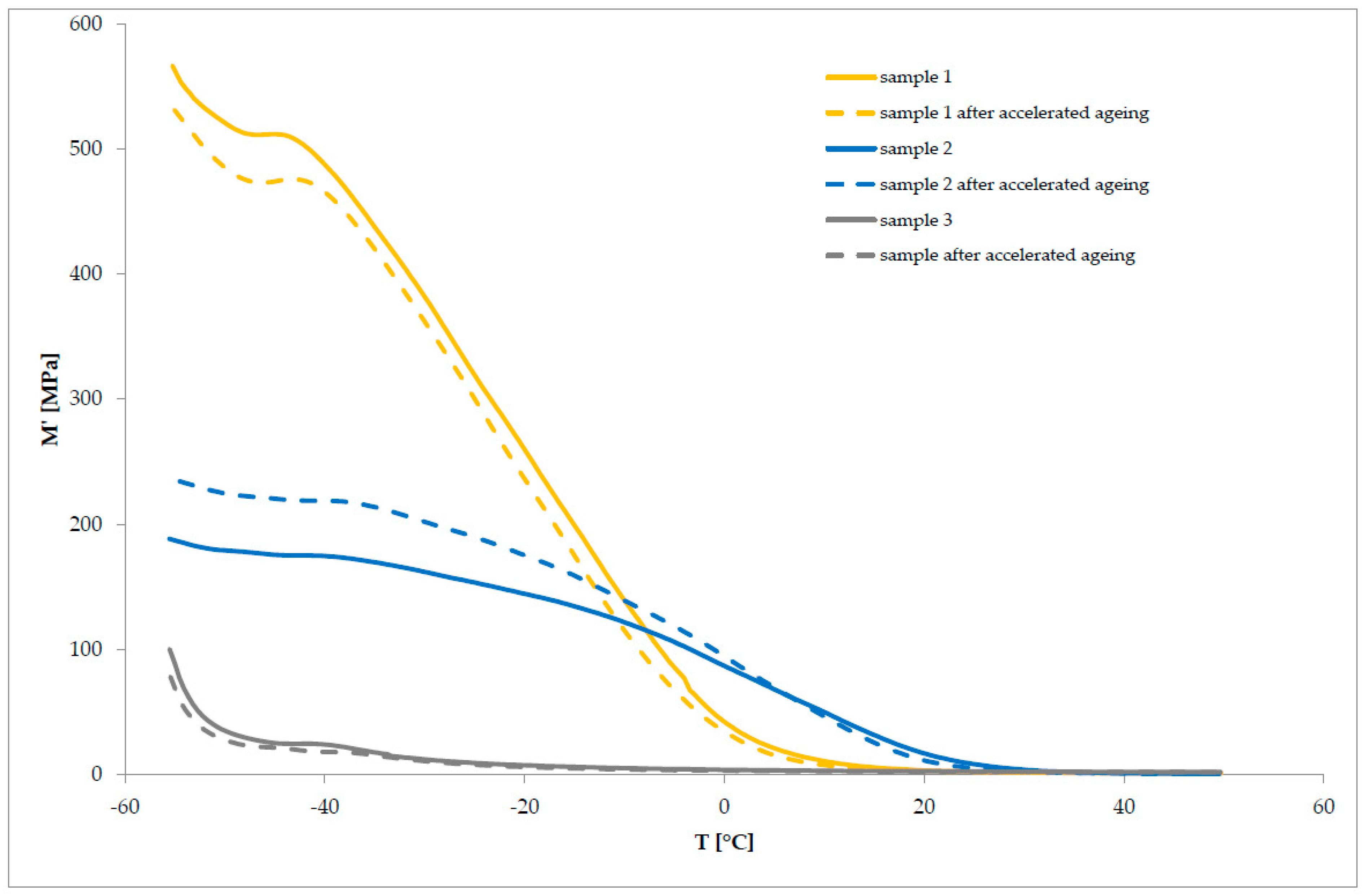 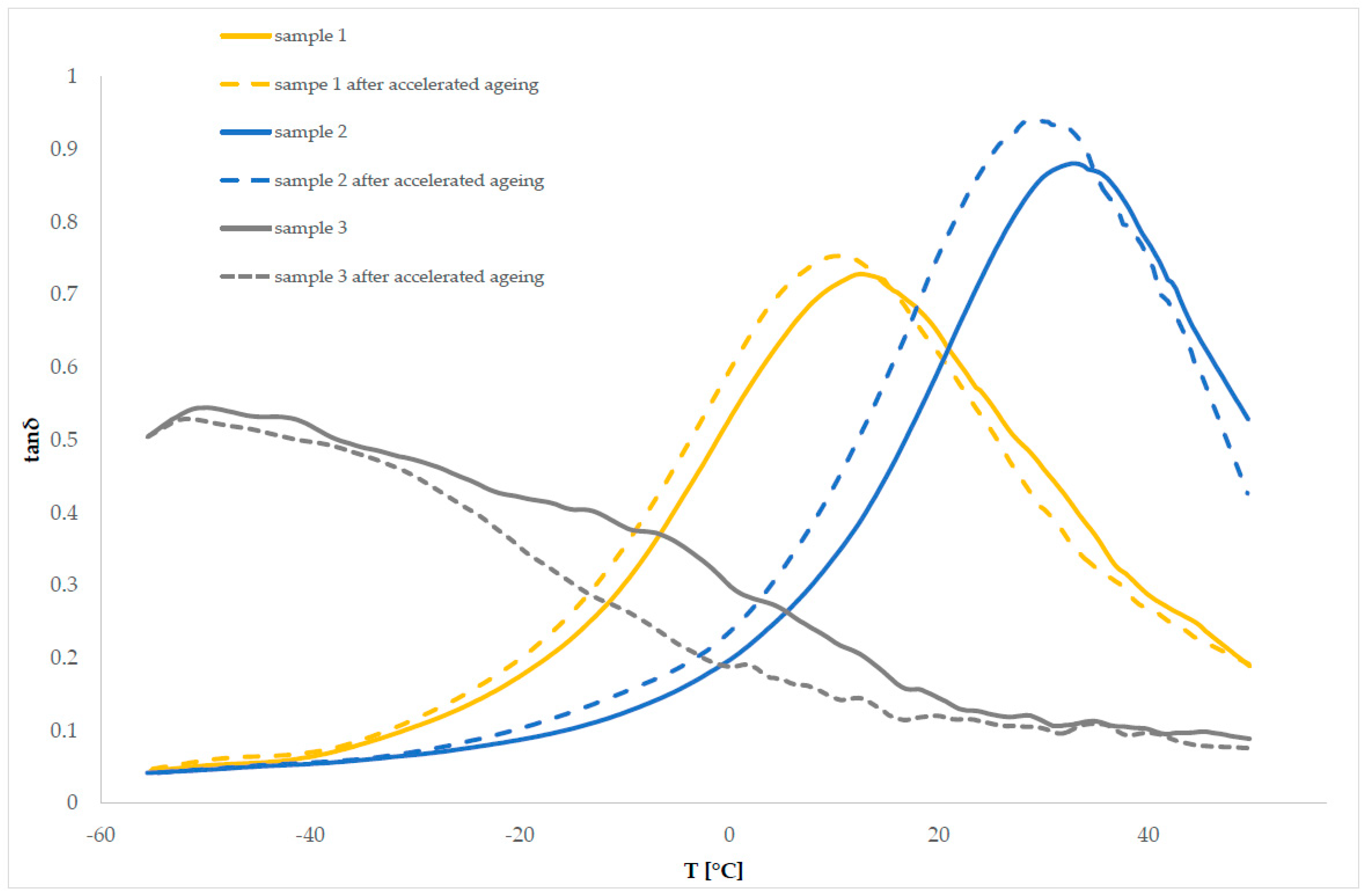 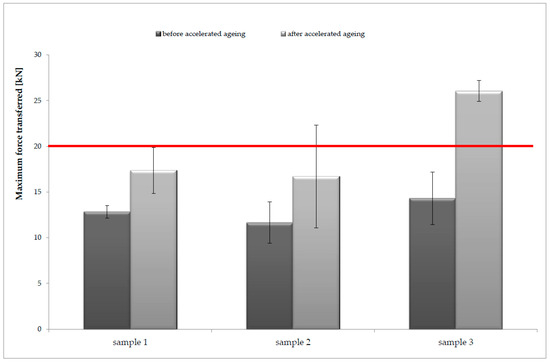