Optimizing the Extraction and Encapsulation of Mucilage from Brasenia Schreberi

Efficient heat transport is important for increasing the lifetime and performance of parts [1,2]. Thermal conductivity reduces hotspots and disperses heat, which reduces stress concentration in the material. Especially polymeric materials, such as carbon fiber reinforced composites with epoxy matrices, inhibit low thermal conductivity and need efficient thermal management. Thermally conductive carbon fiber reinforced composites might be useful for heated rollers or the housing of lightweight electric engines. In contrast to metals, where electrons in the crystal structure can efficiently transfer the heat, phonons are the main transport mechanism for the heat transfer in amorphous materials as polymers [3,4,5]. Therefore, polymers exhibit only low thermal conductivities between 0.1 and 0.5 W/mK [6,7].
One possibility to increase the thermal conductivity is the incorporation of fillers, which is extensively studied with metallic [8,9,10], carbon-based [11,12,13,14] and ceramic materials [15,16,17]. Filler particles dispersed in epoxy resin lead to a number of matrix-particle interfaces. The phonon scattering at these interfaces can lower the thermal conductivity and mechanical properties of the materials. Additionally, the enhanced viscosity reduces processability and increases the cost.
Another pathway to increase the thermal conductivity is the use of pitch-based carbon fibers, also called graphite fibers. The morphology of these fibers fundamentally differs from those of the commonly used carbon fibers based on polyacrylonitrile (PAN) [18,19,20].
A further promising solution to enhance the conductivity is the coating of conventional carbon fibers with metals. The coating via galvanic methods is superior to the coating with Physical Vapour Deposition (PVD). In PVD processes, the thickness and distribution of the metal coating are difficult to control. Nickel is easier to process and, therefore, nickel coated fibers have been commercially available for several years (e.g., from Cycom or TohoTenax) [21]. Composites consisting of nickel coated fiber and epoxy resin were studied by Evans et al., who showed an enhancement in thermal conductivity in the fiber direction from 4.41 W/mK to 6.4 W/mK and in the transverse direction from 0.90 to 0.95 W/mK with 60 vol % fiber volume content [21]. Here, it is worth mentioning that the nickel coated fibers were only used in the outer layer of the laminate. In addition, composites of copper-coated fibers are known from the literature. Yu et al. used copper-coated fibers with very homogenous surfaces using rapid temperature annealing to produce fiber reinforced composites [22]. Copper is beneficial because of its thermal and electrical conductivity and the functional groups on the surface, which can bond to the matrix and presents fewer health concerns than nickel. The main challenge with copper is during galvanic processing, which leads to varying coating thicknesses. The thermal conductivity in this study was enhanced from 0.7 W/mK to 1.9 W/mK in the transverse and from 2.9 to 47.2 in the fiber direction. The fiber content was 48.5 vol % for the uncoated fiber and 26.2 vol % for the coated fiber.
Although the thermal conductivity of these composites was investigated partially, the mechanical properties and electrical conductivity remain uncertain. For use in industrial applications, an elaborative investigation about the thermal and electrical conductivity and the mechanical properties is necessary. This research, therefore, addresses the thermal conductivity in the transverse and fiber direction and the mechanical properties in bending tests.

The resin tetraglycidylmethylenedianiline (TGMDA, EpikoteTM RESIN 496, Hexion Inc., Columbus, OH, USA) is four-functional with an epoxy equivalent of 115 g/eq and was cured with diethyltoluenediamine (XB3473TM, DETDA, hydrogen equivalent weight 43 g/eq).
The used carbon fibers were HTS40 (TohoTenax, Chiyoda, Japan), HTS40 with a nickel coating (TohoTenax, Chiyoda, Japan) and Grafil 34700 with a copper coating (Inca-Fiber, Chemnitz, Germany). The production of the copper-coated fiber is described in detail in the publications of Böttger-Hiller [23,24]. The mechanical properties can be found in Table 1. The thickness of the nickel-coating was 0.247 ± 0.01 µm and those of the copper-coating were 0.75 ± 0.2 µm. The diameter of the carbon fiber without coating was 7 µm for all fibers.
The volume share of nickel on the fiber was 12.6 %, and 33% of copper of the whole fiber.

The unidirectional prepregs were produced via hot-melt processing using the laboratory scale prepreg impregnation machinery of the University of Bayreuth.
First of all, the unidirectional rovings of 12 K carbon fibers were pre-spread. A resin film was coated at 25 °C on a siliconized carrier paper in the coating unit of the prepreg machinery. Finally, the pre-spread fibers were impregnated with the resin film to the final prepreg with a calender (25 °C). The prepregs were then further processed via hand-layup. They were sealed in vacuum bags and cured under atmospheric pressure of 5 bar in a laboratory press at 120, 160 and 200 °C, at each temperature for 1 h with a heating rate of 10 K/min. A postcuring at 220 °C for 2 h followed before cooling down at a rate of 5 K/min.

Thermogravimetric measurements were conducted with the TG 209 F1 Libra (Netzsch-Gerätebau GmbH, Selb, Germany).
For the determination of the fiber volume content, a routine suggested by Monkiewitsch was followed, which was verified in a very thorough investigation [25]. In the suggested routine, fibers were dried for 2 h at 120 °C in the TGA. Then the fibers were heated in the TGA from 20 °C to 800 °C, with a heating rate of 2 K/min under a nitrogen flux of 85 ml/min. The samples of the laminates and samples from neat resin were also dried for 2 h in the TGA, then heated up to 450 °C with a heating ramp of 10 K/min. Finally, an isothermal step for 170 min at 450 °C was performed. All samples were handled with gloves to prevent possible contamination.
In the TGA, the fibers showed only a slight weight loss of (1.0 ± 0.1)%, which could be attributed to the oxidation of the sizing. During the drying step, no significant weight loss could be detected.
The fiber volume content could then be calculated: where is the mass of the fibers, is their density, and represents the density of the resin. The mass of the fibers was calculated by: where is the remaining mass of the laminate after the cycle, and is the remaining mass of the resin.
The method was successfully verified and tested in comparison to the determination of the fiber volume content via density measurements [26].

All samples were scanned with the Skyscan 1072 Micro-CT (Bruker, Artselaar, Belgium), with a linear resolution of 3.50 µm at a magnification of 80, with an accelerating voltage of 80 kV and tube current of 122 µA. The projection images were acquired over 180° at angular increments of 0.23° with an exposure time of 2.57 seconds per frame, averaged over six frames. Three-dimensional images were reconstructed using the reconstruction software provided by the manufacturer (NRecon Version 1.6.4.1), where the ring artifact reduction was applied as needed.
The samples were sputtered using the Cressington 108 Auto Sputter Coater with an Au coating thickness of 13 nm and studied in the JSM 6510 Scanning Electron Microscope (JEOL, Freising, Germany).

The mechanical properties of the composites were measured using the Zwick Z2.5. The samples for testing were prepared according to DIN EN ISO 14125 standards. The bending strength was measured on at least five samples of length 100 mm, width 15 mm and thickness 2 mm, by a three-point bending technique at a cross-head speed of 1 mm/min.

The fibers were used as delivered from the supplier. Figure 1 shows the cross-section records of the uncoated carbon fiber. The surface of these fibers was quite smooth, only the cut edge of the fiber showed detached layers. Figure 2 shows a very homogenous nickel coating on the surface of the carbon fibers. The adhesion between the nickel and fiber was excellent. Figure 3 shows the surface of the copper-coated fiber. The coating of copper was much less homogenous: Larger agglomerations could be found on the surface. In addition, the adhesion with the fiber was not as smooth as those of the nickel fibers: Parts of copper seemed to detach from the fiber. Already during production, smaller particles loosened from the fibers, however, their share was determined to be below 2%.
Figure 4 shows the cross-section of the laminates in SEM. The sample from the copper-coated fiber laminate showed an heterogeneous distribution of the copper coating. Therefore, the coating thickness on the fibers varied. The nickel coating was much more homogenous.
The µCT records in Figure 5 confirmed the excellent laminate quality. The nickel-coated laminate was very homogenous. The pictures on the left show the void content. Here, the nickel-coated laminate showed no visible voids, the software calculated them as below 0.5%. The copper samples showed some minor voids, which were below 0.8%. The image in Figure 5d shows some heterogeneity of the copper-coated sample.

In polymers, the dominating mechanism for the transport of heat is phonon transport. In metals and carbon allotropes, the heat is transported mainly by electrons. This mechanism is much more efficient due to the much smaller radius of 10−5 nm of electrons compared to the free wavelength of phonons of 0.7 nm. [5,42,43] For this reason, the transport mechanism of the electric conductivity and the thermal conductivity is similar in carbon-based materials and metals. An increase in thermal conductivity of carbon or metal can be correlated with an increase in electrical conductivity.
Figure 9 shows the electric conductivities of the laminates. The laminates from the copper-coated fibers showed the highest conductivities compared to the nickel-coated and uncoated fibers at the same fiber content. It is was clear that the metal-coated fibers showed electric conductivities, which were three orders of magnitude higher than their uncoated counterparts. For the movement of electrons in heterogeneous materials, the distance between the particles is crucial. Once a conductive network of adjacent particles is built, the conductivity significantly increases. The filler content, which marks a sudden increase in electric conductivity is called the percolation threshold. The morphology of the coated laminates is beneficial to build a conductive network: The copper coating around the fibers easily makes contact with the surrounding copper shells. By this way, a conductive path out of the copper coating is formed.

The authors kindly thank the German Ministry of Economy and Energy (BMWi) for the funding of the Lufo Project TELOS (FKZ 20Y1516D). This publication was funded by the German Research Foundation (DFG) and the University of Bayreuth in the funding programme Open Access Publishing.

There are no conflict of interest associated with this publication. 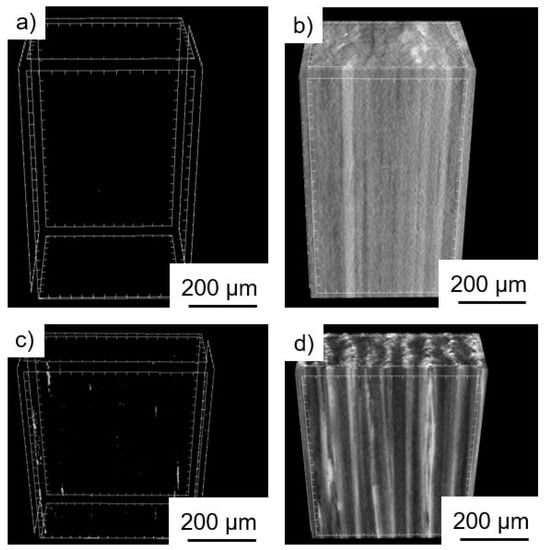 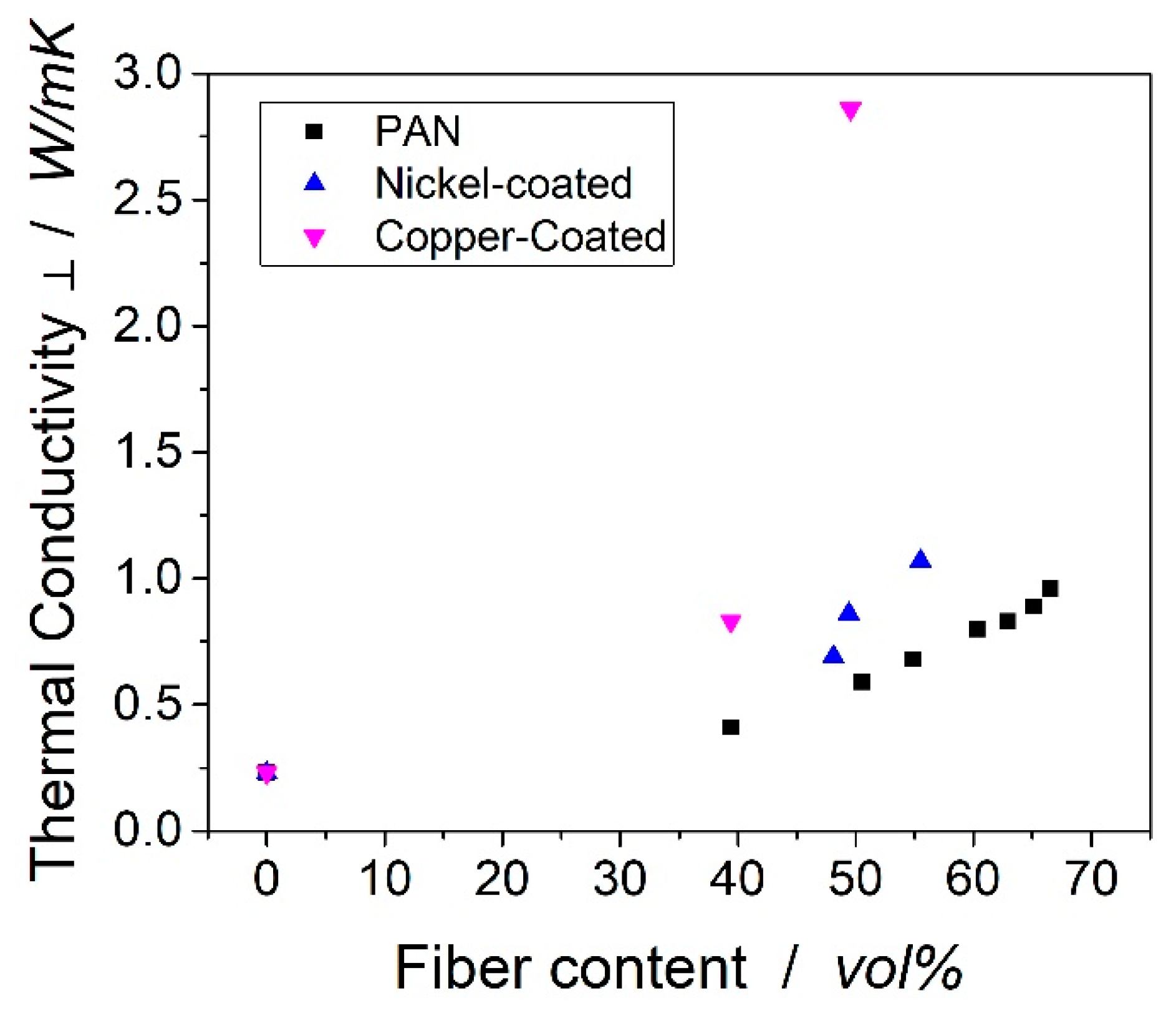 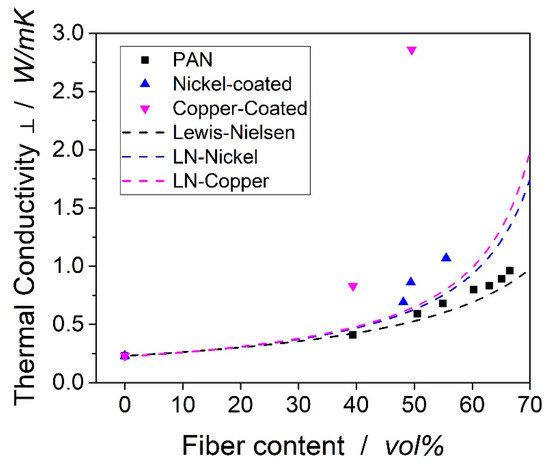 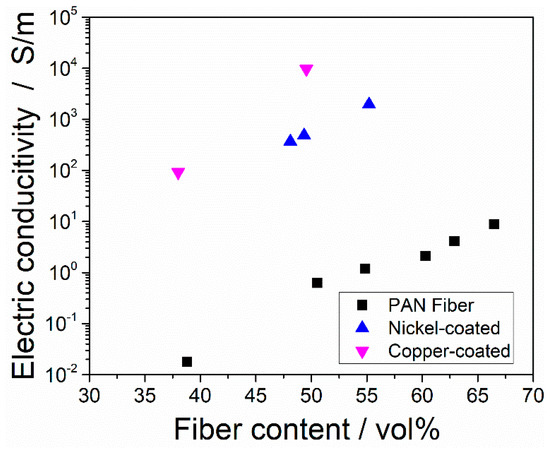 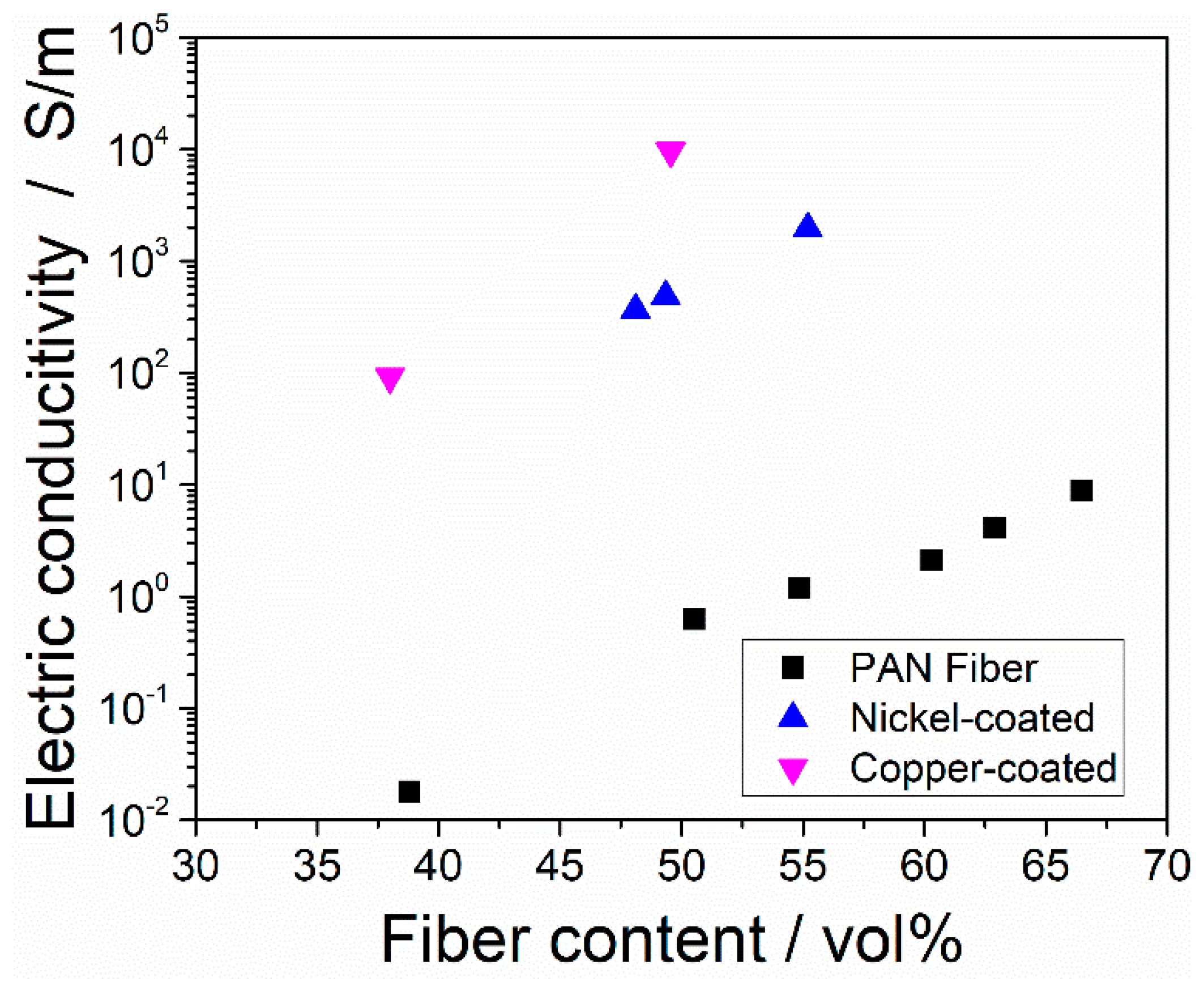