Photo-actuated actuators are attractive to researchers since they offer an effective means to couple photonic energy into the actuator structures, and bring advantages of simplified systems with wireless functionality, remote control, green energy, and high-level integration [1,2]. Furthermore, the use of polymer materials to fabricate actuators is beneficial due to their high mechanical flexibility, low weight, excellent corrosion resistance, low-noise operation and easy fabrication features [3]. Therefore, photoactive deformable polymer materials would be especially promising for the development of photo-actuated actuators. Among them, crosslinked liquid crystalline polymers (CLCPs) containing photochromic moieties, such as azobenzene, may represent one of the most studied systems [4,5,6,7,8]. As a crosslinking of liquid crystalline (LC) polymer chains makes a strong correlation between LC mesogens and polymers, while CLCPs combine the characteristics of anisotropic aspect of LC and rubber elasticity of polymer networks. The self-organization function of LC systems and the flexibility stemming from the polymer networks allow for large and reversible anisotropic deformation in response to the applied stimuli [9,10]. CLCPs containing azobenzene (AZO-CLCPs) demonstrate a reversible photo-triggered deformation that is typically induced by isomerization of azobenzene between trans and cis, this photo-induced isomerization of azobenzene moieties can disrupt or reversely arrange the molecular ordering, and these molecular scale transitions result in remarkable macroscopic deformation [11,12]. Various photo-actuated soft actuators, such as photomechanical cantilevers [13,14], optical pendulum generator [15], plastic motors [16], flexible microrobots [17,18,19,20], micropump [21], microvalve [22], artificial cilia [23], and artificial organs [24], etc, have been made from AZO-CLCPs.
The performances of CLCPs and liquid crystalline elastomers (LCEs), which are lightly cross-linked CLCPs, can generally be modified and improved when they are incorporated with other materials. Researchers have fabricated AZO-CLCP nanocomposites capable of photo-induced deformation upon exposure to near-infrared light or visible light by introducing upconversion nanophosphors into matrices [25,26]. Through the incorporation of polyethylene films, a poly vinyl alcohol matrix or a polyurethane network with CLCPs or LCEs, the materials obtained good forming capabilities, mechanical features and recyclable utilization [16,17,18,27,28,29,30].
Carbon nanotubes (CNTs) and graphene-typed materials have been widely studied for their extraordinary physical properties, such as good absorption in the visible/near-infrared region, high mechanical strengths and conductivities, etc [31]. Therefore, CNTs and graphene-typed materials have been successfully incorporated into CLCPs and LCEs to improve the materials’ mechanical properties, and their unique photo-thermal conversion effect and high thermal conductivities make them efficient nanoscale heaters to generate localized heating upon light irradiation, thereby inducing the LC-to-isotropy phase transition of matrices, and hence the reversible deformation of CLCP or LCE materials [27,28,29,30,32,33,34,35,36,37,38,39,40,41]. CNTs can obviously affect the structure and property of incorporated organic molecules by noncovalent interactions [31], it has been reported that the CNTs with aligned nanostructure could effectively orient the mesogens of CLCPs along the axis of CNTs [42]. The aligned CNTs can also be used to attain a higher photo-mechanical energy conversion efficiency of AZO-CLCPs by amplifying the stress and mechanical force exerted under molecular transition of the azobenzene derivatives [43].
In this work, we report an effective approach to fabricate photodeformable AZO-CLCP/CNT nanocomposite composed of a AZO-CLCP layer and CNT sheet. Homogeneous alignment of LC mesogens was achieved by the aligning-structured polyimide layer coated on glass substrate [44] and the nanocomposite film formed by the in situ photo polymerization of precursor mixture on CNT sheet. In the AZO-CLCP/CNT nanocomposite films, the AZO-CLCP layers functioned as photoresponsive parts that provided photo actuation performance for the materials, and the CNT sheets as photoinert substrates that provided good film-formation and mechanical properties. The designed structure and composition endowed the AZO-CLCP/CNT nanocomposite with salient features, including easy fabrication, low cost, high mechanical properties, good robustness and photo actuation performance. Compared to the pure AZO-CLCP films, the AZO-CLCP/CNT nanocomposite films could not only deform with the similar responsive speed under the irradiation of UV light at 366 nm of wavelength, but also could much more rapidly return to their initial shapes after the UV light irradiation was removed due to the elasticity effect of CNT sheets. Furthermore, the AZO-CLCP/CNT nanocomposite films moved in a different photodeformable direction compared to the pure AZO-CLCP films, which should be caused by the interfacial interaction between the polymer network and the CNT sheet [45]. The photo actuation performance was influenced by the content of azobenzene moieties contained in AZO-CLCP matrix, the optimum photo actuation performance could be achieved in a suitable content of azobenzene moieties. Based on the superior performances demonstrated by the AZO-CLCP/CNT nanocomposite films, we used this nanocomposite as the microvalve membrane actuator for a conceptual device of a microfluidic system. Experiment indicated that the switching of the microvalve could be precisely controlled by light. These results showed that this AZO-CLCP/CNT nanocomposite may have great potential in smart actuator applications for biological engineering, medical treatment, environment detection and microelectromechanical systems (MEMS), etc.

The azobenzene-contained diacrylate LC monomer “4,4′-bis[1 1-(acryloyloxy)nonyloxy]azobenzene (DA11AB)” and diacrylate LC monomer “1,4-bis[4-(9-acryloyloxynonyloxy)benzoyloxy]-2-methylbenzene (C9A) ” were synthesized by referencing the previous reported work [19]. The initiator “Irgacure 784” was purchased from commercial supplier, Sigma-Aldrich (St Louis, MO, USA), and used as received. The CNT sheets with a thickness of about 10 µm were obtained from Xianfeng Nano-Tech (Nanjing, China).
The AZO-CLCP films were prepared by the photopolymerization of DA11AB and C9A, containing 2 mol % of initiator (Figure S1). The photopolymerization was carried out in a glass cell (as the reaction chamber) with about 20 µm thick gap. The two inner surfaces of the cell had been coated with a polyimide alignment layer that had been rubbed to align the LC mesogens. The powdered precursor was a mixture of DA11AB and C9A with a designed molar ratio, and the initiator was heated to 110 °C to melt. The liquid precursor mixture was injected into the cell, and then the temperature of the cell was gradually decreased to 93 °C at which the liquid precursor mixture was in a LC phase. The precursor mixture in LC phase was cross-linked by photopolymerization at >540 nm (3 mW·cm−2) with a high-pressure mercury lamp (CHANGTUO CHF-XM250, Beijing, China) through a glass filter for 3 h. As the polymerization completed, the cell was opened, and the AZO-CLCP film of about 20 µm thickness was removed from the cell with a cutter. The AZO-CLCP/CNT nanocomposite films were prepared via the same procedure, but the photopolymerization was carried out in the glass cell with a CNT sheet sandwiched between the two inner surfaces (Figure S2). The prepared AZO-CLCP films with the molar ratio of DA11AB and C9A being 1:9, 2:8, 4:6 and 6:4 respective are designated as F10, F20, F40 and F60 respectively. The prepared AZO-CLCP/CNT nanocomposite films with the molar ratio of DA11AB to C9A being 1:9, 2:8, 4:6 and 6:4 respective are designated as CF10, CF20, CF40 and CF60 respectively.

The authors thank Mingchen Xie and Shuai Huang for their academic communications, and the members of Key Laboratory of Functional Inorganic Material Chemistry for technical support. 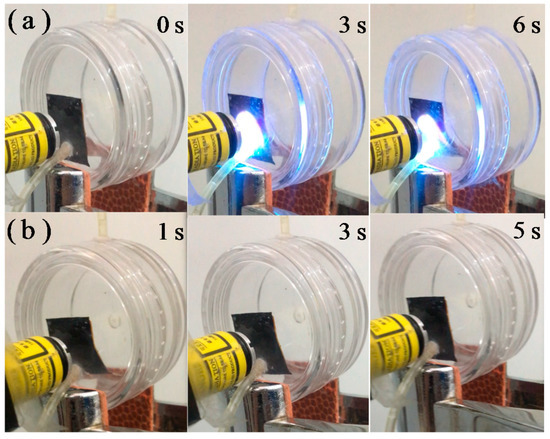