Poly(3-hexylthiophene) Grafting and Molecular Dilution: Study of a Class of Conjugated Graft Copolymers

Electrochromic devices have important applications in various fields, including in smart windows for efficient temperature regulation in buildings [1,2,3], smart packaging, and information technology [4,5]. Recently, commercial products have emerged containing electrochromic displays, such as smart windows, or to provide information to the user, such as battery life or other visual/graphic representations of information [6,7].
However, electrochromic displays have so far been limited in their application, partly due to the difficulties involved in patterning the materials at the micrometer scale using high throughput methods [8]. The techniques developed for patterning electrochromic conductive polymers (CPs) are highly promising in that respect, particularly in combination with these CPs’ excellent stability, good optical contrast and exceptional optical memory for low power consumption [8,9,10]. These attributes show high potential for commercial CP-based electrochromic products. Furthermore, high-quality films of these otherwise insoluble materials can be prepared by vapor phase polymerization (VPP). While other vapor deposition systems exist, such as chemical vapor deposition [11] and molecular layer deposition [12], VPP has been shown to provide CP films with excellent properties [13,14,15].
Poly(3,4-ethylenedioxythiophene) (PEDOT) has been the most studied CP for electrochromic applications [16,17,18,19]. In addition to its deep blue reduced state and transparent oxidized state, PEDOT shows good mechanical and electrochemical stability and provides sufficiently high conductivity (>1000 S/cm) to facilitate its own switching without need for supporting current collectors [14,16]. PEDOT’s electrochromic behavior is suitable for many applications, ranging from smart windows to smart package displays [20]. Several reports have recognized that the possibility to pattern PEDOT could significantly extend its functionality and application potential [17,21]. While dip-pen lithography and other techniques have achieved submicrometer patterning resolution, they generally require expensive equipment and long processing times [22]. More established patterning techniques for large area production, like screen printing, instead possess other drawbacks such as relatively thick films (>1 µm) and limited resolution (>100 µm) [4,17].
We have developed a promising alternative technique that combines UV-light mediated patterning and VPP [23,24]. In brief, this new patterning technique locally alters the chemical environment of an oxidant film by UV-irradiation through a photolithography mask. Patterned CP films are then synthesized via VPP by exposing the irradiated films to monomer vapor, followed by washing and drying. The method enables high resolution patterning of PEDOT (<10 µm) over areas that are only limited by the size of the photolithography mask. Moreover, the technique can be used to modulate the optical properties of the produced polymer to form PEDOT images that can disappear and reappear by switching the redox states of the CP. This feature is related to the high optical contrast between UV-treated and pristine PEDOT in the reduced state, while the optical contrast between UV-treated and pristine areas is low in the oxidized state. Previous work has demonstrated the possibility of creating picture-to-picture electrochromic displays using multiple types of CPs [24]. However, the devices were “black and white” only (binary patterns with sharp edges and no gradients) and showed very slow switching (>5 min), which was probably related to having two different types of CPs layered on the same ITO-coated substrate and using another ITO-coated substrate as a counter electrode, which provided an insufficient counter charge.
Here, we present a new concept that enables electrochromic “greyscale” (patterns with gradients) picture-to-picture devices with rapid-switching, based only on PEDOT with tosylate (Tos) as the counter ion. We demonstrate that locally varying the UV-dose by exposure through a greyscale mask produces greyscale PEDOT:Tos pictures, which appear and disappear upon switching. Separating two films with imprinted PEDOT:Tos pictures with a gel-electrolyte allowed picture-to-picture switching, with only one of the images shown at a time. VPP parameter variation enabled control of the quality and transparency of the imprinted pictures.
Flexible organic devices hold great promise for various disposable electronic applications such as medical tests and smart labels. However, today such devices are typically produced on plastic substrates, which could contribute to the microplastic pollution of the planet. To enable more environmentally friendly electronics, we adapted the UV-patterning technology to be used on cellulose-based substrates, creating electrochromic paper devices. The study thereby also shows progress in the field of paper electronics, highlighting the potential of the UV-patterning technique for sustainable and recyclable products based on cellulose materials that are lightweight and easily processable, and which provide excellent flexibility and robustness.

CleviosTM CB 40 (40 wt % Fe(III) p-toluenesulfonate (Fe(Tos)3) in butanol) was purchased from Heraeus (Hanau, Germany). The 3,4-ethylenedioxythiophene (EDOT), 1-ethyl-3-methylimidazolium ethyl sulfate (EMIM-ES), hydroxyethyl cellulose (HEC) and the triblock co-polymer poly(ethylene glycol)-block-poly(propylene glycol)-block-poly(ethylene glycol) (PEG-PPG-PEG, 5800 g·mol−1) were purchased from Sigma Aldrich (St. Louis, MO, USA). All chemicals were used as received without further purification. Solutions were prepared in ambient conditions without the need for a glove box. The VPP was performed in a vacuum hotplate chamber (JP Selectra S.A, Barcelona, Spain).
The procedure for the VPP of EDOT was similar to that previously reported [15], where the oxidant solution was composed of Fe(Tos)3 (12.3 wt % unless otherwise stated) and PEG-PPG-PEG (23.1 wt %) in a 1.2:3 mixture of ethanol and butanol. The oxidant solution was created by mixing PEG-PPG-PEG with Fe(Tos)3 in butanol and ethanol. The solution was stirred and heated to approximately 50 °C in order to melt and dissolve the PEG-PPG-PEG. The oxidant solution was used immediately after formation, although it is also useable for months after formation with no decrease in the polymer properties.
The oxidant solution was spin-coated onto cleaned (thoroughly with isopropanol) glass substrates (with gold electrodes for electrical characterization), ITO-coated glass or PET, at 1500 rpm for 30 s. The oxidant-coated substrates were placed on a 70 °C hot plate for 30 s before undergoing UV-light exposure for 900 s using a UV-lamp with an intensity of 20 mW/cm2 at 405 nm and 10 mW/cm2 at 365 nm. For the patterning, photomasks printed on PET plastic substrates were created by printing black greyscale images on transparent overhead projector substrates using a standard office printer. The photomasks were mounted on quartz glass and suspended above the oxidant-coated substrates prior to UV-light exposure to create regions with varying exposure. EDOT VPP was performed at −70 mmHg of pressure at a temperature of 60 °C for 30 min. After polymerization, the thin films were washed with ethanol and air-dried.
Electrochromic behavior for individual films was investigated by encapsulating a PEDOT:Tos pattern on transparent ITO-glass with a counter electrode of bare ITO-glass and with a gel-electrolyte between the electrodes. This enabled investigation of the individual electrochromic behavior without influence from the counter electrode. The ITO counter electrode could provide sufficient charge for visibility testing. Picture-to-picture electrochromicci devices were constructed using patterned PEDOT:Tos films as both the working and the counter electrochromic electrodes. The gel electrolyte was made by mixing 7 wt % HEC in EMIM-ES ionic liquid and stirring using a magnet bar while heating the mixture to 100 °C on a hotplate.
Prototype electrochromic devices were created by doctor blade coating the gel-electrolyte onto the CP ITO electrode and placing the second CP pattern ITO electrode on top, as depicted in Figure 1a. The devices were switched by applying a voltage of 1.5 V at varying polarity.
Proof-of-concept paper displays were created using a lift-off technique with the conductive polymer patterns in water. The PEDOT:Tos patterns were then transferred to porous paper with another global layer of PEDOT:Tos deposited on the backside of the paper to act as the counter electrode. The paper was soaked with the gel-electrolyte and sandwiched between two pieces of ITO-coated glass.
Color contrast measurements were performed on PEDOT:Tos samples using a spectrophotometer (Datacolor Mercury, Lucerne, Switzerland). A 5 cm × 5 cm PEDOT:PSS on PET was employed as the counter electrode in a lateral electrochromic setup to avoid interference from the counter electrode. The larger area of the counter electrode ensures that enough charge can be supplied to the working electrode for complete electrochemical switching to occur. The electrochemical switching was performed in 1M NaCl aqueous solution while applying an electrical bias of ±1.5 V between the working and counter electrodes. The samples were switched between their oxidized and reduced states five times before performing the measurements. The samples were then switched to their oxidized/reduced state and dried with a nitrogen gun before performing the color measurements in reflection with the samples positioned on a white back-scattering background. L*, a* and b* (color space coordinates) values were recorded for the oxidized and reduced states of pristine and UV-light treated PEDOT films. Color contrast between the two states or samples (denoted 1 and 2) were calculated from the color space coordinates using the formula [25]:
Film thickness was measured using atomic force microscopy (AFM). AFM images were obtained in tapping mode using a Veeco Dimension 3100 (Bruker, MA, USA). The thickness measurements were analyzed using the Gwyddion software (Brno, Czech Republic).

In summary, this report focused on progressing the UV-light mediated VPP patterning of CPs for novel electrochromic device applications. We demonstrated a new concept for electrochromic picture-to-picture devices with rapid-switching based on two patterned PEDOT films. The use of greyscale photomasks for the patterning step enabled an extension of the concept to gradient pattern electrochromic picture-to-picture displays. We investigated switching and image color contrasts for different starting oxidant concentrations, finding optimum conditions at intermediate concentrations for pictures that can appear and disappear upon electrochromic switching. Finally, we reported a flexible paper-based electrochromic display based on the UV-patterning technique, thus highlighting the technique’s potential to contribute to sustainable optoelectronic applications.

This research has been supported by Treesearch.se. 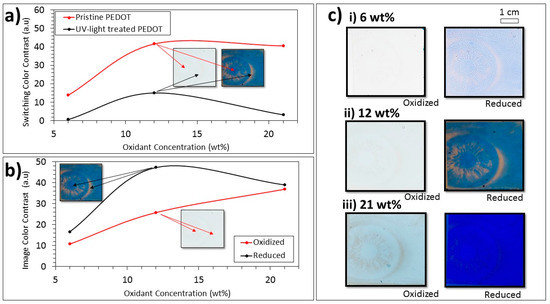 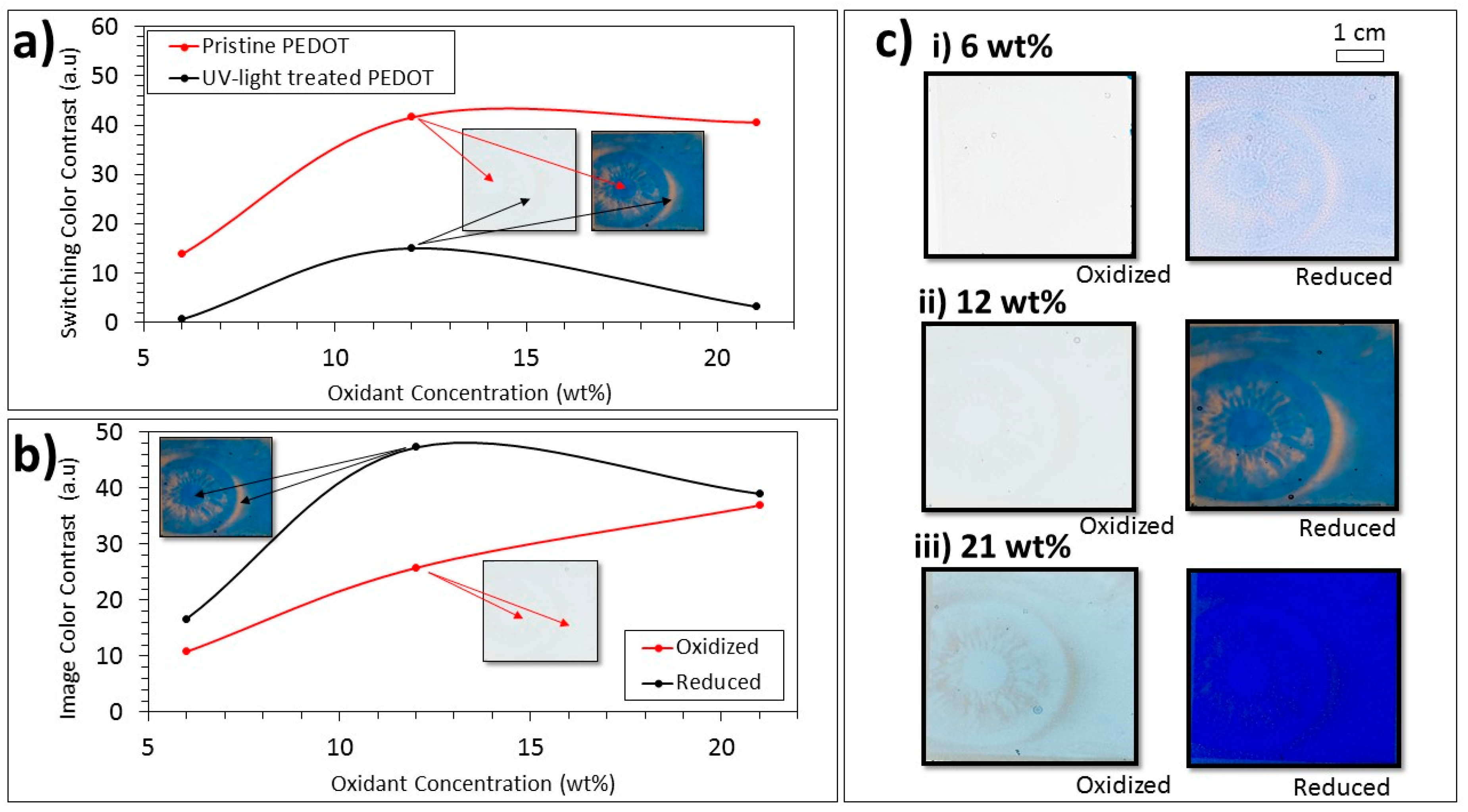