This work reports the effect of the addition of an oligomer of lactic acid (OLA), in the 5–20 wt% range, on the processing and properties of polylactide (PLA) pieces prepared by injection molding. The obtained results suggested that the here-tested OLA mainly performs as an impact modifier for PLA, showing a percentage increase in the impact strength of approximately 171% for the injection-molded pieces containing 15 wt% OLA. A slight plasticization was observed by the decrease of the glass transition temperature (Tg) of PLA of up to 12.5 °C. The OLA addition also promoted a reduction of the cold crystallization temperature (Tcc) of more than 10 °C due to an increased motion of the biopolymer chains and the potential nucleating effect of the short oligomer chains. Moreover, the shape memory behavior of the PLA samples was characterized by flexural tests with different deformation angles, that is, 15°, 30°, 60°, and 90°. The obtained results confirmed the extraordinary effect of OLA on the shape memory recovery (Rr) of PLA, which increased linearly as the OLA loading increased. In particular, the OLA-containing PLA samples were able to successfully recover over 95% of their original shape for low deformation angles, while they still reached nearly 70% of recovery for the highest angles. Therefore, the present OLA can be successfully used as a novel additive to improve the toughness and shape memory behavior of compostable packaging articles based on PLA in the new frame of the Circular Economy. View Full-Text
Keywords: PLA; OLA; impact modifier; shape memory; packaging applications PLA; OLA; impact modifier; shape memory; packaging applications
►▼ Show Figures 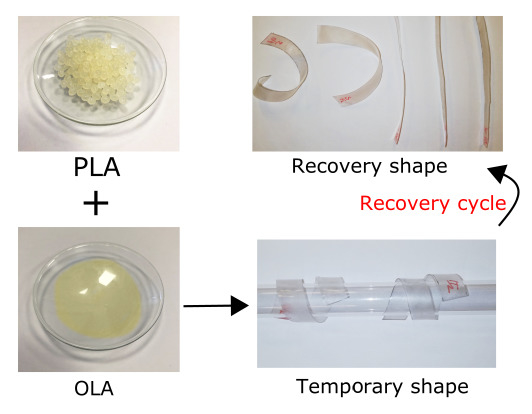