As the current global threat of antimicrobial resistance (AMR) persists, developing alternatives to antibiotics that are less susceptible to resistance is becoming an urgent necessity. Recent advances in biomaterials have allowed for the development and fabrication of materials with discrete surface nanotopographies that can deter bacteria from adhering to their surface. Using binary polymer blends of polystyrene (PS), poly(methyl methacrylate) (PMMA) and polycaprolactone (PCL) and varying their relative concentrations, PS/PCL, PS/PMMA and PCL/PMMA polymer demixed thin films were developed with nanoisland, nanoribbon and nanopit topographies. In the PS/PCL system, PS segregates to the air-polymer interface, with the lower solubility PCL preferring the substrate-polymer interface. In the PS/PMMA and PCL/PMMA systems, PMMA prefers the air-polymer interface due to its greater solubility and lower surface energy. The anti-adhesion efficacy of the demixed films were tested against Pseudomonas aeruginosa (PA14). PS/PCL and PCL/PMMA demixed films showed a significant reduction in cell counts adhered on their surfaces compared to pure polymer control films, while no reduction was observed in the counts adhered on PS/PMMA demixed films. While the specific morphology did not affect the adhesion, a relationship between bacterial cell and topographical surface feature size was apparent. If the surface feature was smaller than the cell, then an anti-adhesion effect was observed; if the surface feature was larger than the cell, then the bacteria preferred to adhere. View Full-Text
Keywords: antimicrobial; nanotopography; polymer demixing; biofilm; biointerfaces antimicrobial; nanotopography; polymer demixing; biofilm; biointerfaces
►▼ Show Figures 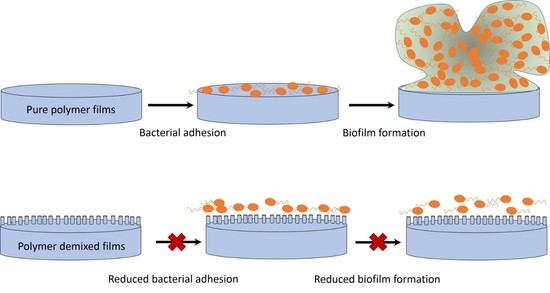